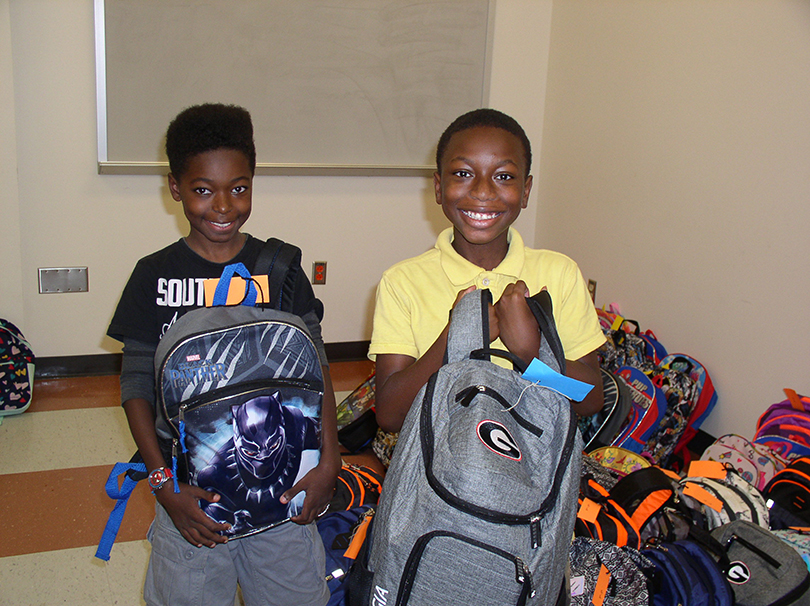 While many people in the Augusta area are familiar with the College of Nursing’s Healthy Grandparents Program because of its annual backpack giveaway for school children living with grandparents, the full depth of the 21-year-old program is sometimes overlooked.

Established in early 1999 to provide support for grandparents raising grandchildren from birth to age 17, the program places a major focus on grandparents’ health, with the primary goal to help them provide the grandchildren with a stable and supportive home environment.

The backpack giveaway certainly relieves some of that back-to-school stress — 150 were distributed in advance of the 2020-21 school year — but the challenges faced by these grandparents are year-round, and they often require more than school supplies to overcome.

“We find quite often that these grandparents assume the daily responsibility and care of their grandchildren when they are abandoned by their parents,” says Dr. Mary Lou Davis, director of the Healthy Grandparents Program and pediatric nurse practitioner program coordinator at the College of Nursing. “These grandparents are basically foster parents but without the resources.”

According to the latest numbers, 47% of children served by the program had no legal relationship with their grandparents upon enrolling in the program, and 59% of these grandfamilies were headed by single grandmothers.

With little access to information, often no custody or access to the legal system and frequently a lack of financial resources, many of these grandparents don’t know what assistance is available to them.

Program participants are linked to community-based resources and receive monthly in-home health screenings and counseling; yearly pediatric physicals; enrichment opportunities for after school and summer; child custody assistance; and other benefits, including the back-to-school backpack giveaway. They also profit from the participation of other departments from the university and health system.

All that is managed with one full-time social worker, a part-time nurse and Davis, who oversees the program and serves as principal investigator on the grant study.

The pandemic has impacted the interactions and limited some of the events they can hold, but Davis remains positive about the continuing support the program is able to provide.

“Grandparents who have participated in the program are our biggest source of referrals,” she says.