History
with a mission

When Dr. Karla Leeper, executive vice president for Operations, first toured the Guardhouse Museum on the Summerville Campus a few years ago, she walked away a bit dismayed.

“It had become sort of the hall closet of the institution,” she says.

Having been restored to its original appearance in 2003 thanks to a grant from the state of Georgia and a generous gift from Ann Boardman in honor of her son-in-law Maxcy Paul Brown, a longtime employee of the university, the structure itself was in fine shape — it had even won a Preservation Award from Historic Augusta — but by the time Leeper took her tour, the exhibits inside no longer told a cohesive story.

As part of the Heritage Project, a broad look at histories and traditions that could bind the two campuses together after consolidation, the Guardhouse Museum was assessed in 2015. The final report found that while the structure was sound, the interior and exhibits needed updating.

Having been previously assigned to the Division of Communications and Marketing, which is under Leeper’s supervision, Leeper carved out money over the course of several years to handle the renovations. She wanted the updated museum to accomplish two things: tell the story of the place and do it in a way that created student opportunities that would fully integrate it into campus.

To do the former, she enlisted the help of Caldwell and Nancy Glaser, executive director of the Augusta Museum of History. To do the latter, she needed to relinquish it.

“It needed to be in the care and feeding of Pamplin College, and I didn’t want to turn it over to them in bad shape,” Leeper says.

The Katherine Reese Pamplin College of Arts, Humanities, and Social Sciences was building out its museum studies and public history focus, and Leeper felt the Guardhouse Museum would be a perfect complement to that.

However, a museum is not just displaying pictures and objects, she says. It needed to meet historical and academic standards as well as other professional guidelines, which is where Glaser comes in.

“This is what we do here ­— we do exhibits,” Glaser says. “So I put a budget together with some designs and drawings, and she agreed.”

New Within the Old

According to Glaser, the Arsenal story has never really been told from start to finish, and the story is a fascinating one.

Originally constructed near the Savannah River in 1819, the Arsenal was relocated to what is now known as Summerville in 1827-28. It was occupied by Confederate forces during the Civil War, then returned to the United States at war’s end, where it supplied the U.S. military with munitions and other wartime needs in every conflict through the Korean War.

“The building itself was built right after the Civil War, in 1866, as the guardhouse for the United States Arsenal, which Union troops had come back to in 1865,” Caldwell says.

Located at the former entrance — then, there was a long diagonal road that went from the corner of Walton Way and Katherine Street to Payne Hall and the Quad — it remained the guardhouse until 1955, when the U.S. government decided to give up the Arsenal.

At that point, arrangements were made to buy the property for the Junior College of Augusta, which had been located at the Academy of Richmond County since the school had moved up the hill to its current location in 1926.

“My role was to do a timeline of the Arsenal history from the beginning up to the takeover by the Junior College of Augusta,” Caldwell says. “So what we have is basically a pre-Civil War part, a Civil War exhibit and then a modern exhibit.”

Divided loosely into two rooms, the main gallery contains artifacts found mostly through archaeological digs on the property as well as maps and photos depicting the Arsenal through the years. A re-creation of a workbench showcases the kind of work that would have been done in the modern era and the equipment that would have been used to do it. A smaller gallery gives display space for rotating student exhibits.

Important to note: Nothing was done during this renovation to change the outside of the structure.

“The university didn’t do anything to that space that could not be reversed because it’s an historic structure,” Glaser says. “We may have painted the walls, but all the original walls are back there. When you’re working at an historic property, you’re always concerned about those kinds of things, and we didn’t do anything without approval.” 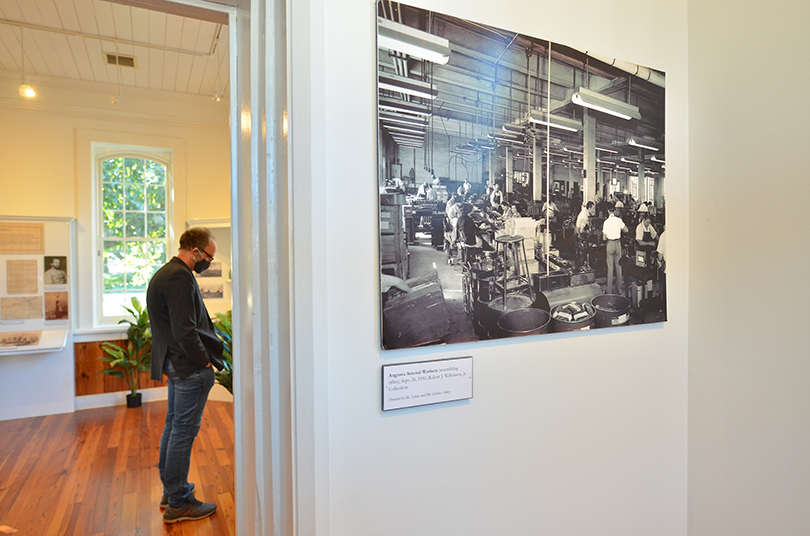 On January 5, 2021, oversite of the newly renovated Guardhouse Museum was officially transferred to Pamplin College.

“We’re excited with what we can do with it,” says Dr. Andrew Goss, chair of Pamplin’s Department of History, Anthropology and Philosophy. “We have a concentration in public history now and a museum certificate, and the Guardhouse Museum will be able to function like a laboratory.”

The Certificate in Arts Administration helps students develop the skills necessary for employment with nonprofits in the arts, while the Certificate of Museum Studies prepares students for careers in and around museums.

For Stacey Thompson, a part-time instructor who works as the registrar and collections manager at the Morris Museum of Art in downtown Augusta, the Guardhouse Museum provides her students exactly what Leeper hoped it would: interesting opportunities to put the things they’re learning into real-world perspective.

Her Intro to Museum Studies class in the fall had about 15 students who received an overview in the discipline and profession of museum studies while also learning about collections management and exhibition design. And while the Guardhouse Museum wasn’t finished at the time, Thompson says it was nevertheless a valuable experience for the students to see what the process looked like.

This semester, those same students are in a museum management and leadership class, so the completed museum provides a great opportunity for them to see what has changed and why.

“Some of them are public history students, some are anthropology students or museum studies students, so what I ended up doing is giving them an assignment for a project,” she says. “Five of the 15 are going to focus on the Guardhouse Museum, two are honor students and three additional students were selected because they were in last semester’s class and they have a lot more background and a lot more experience in talking about the Guardhouse Museum and what kinds of things we can do with it.”

In addition, the students will be collaborating to create a mission statement and a strategic plan.

“That’ll be an interesting experience for them, because we’re going to be guiding the strategic planning, and we want to guide it in a way that makes optimum use of the space,” she says.

Beyond its historic value and the academic value it has for her students, Thompson believes in the value of the Guardhouse Museum to help integrate students into the community.

“It’s an excellent opportunity to teach students and the community about what happened in the past and how it can help us have a dialogue about what’s happening today,” she says.

“We must tell our story,” she says. “The past — understanding the past and the decisions people made in the past — I think, sets us on a better path for the present, but also reminds us that the decisions we’re making now are going to affect people yet to come.”

And while that kind of bridge can be an important connection between the university and the community, it can also be a bridge between the two legacy institutions that make up Augusta University.

During Alumni Weekend, Caldwell leads a walking tour of the Summerville Campus that starts at the Guardhouse Museum and follows the history walk as it works its way around campus. Over the last few years, the groups have become not only larger, but also more diverse.

“More and more people who are dentists or physicians are interested in hearing about the history,” she says. “So I think in some ways it helps us connect everybody that’s part of this new, united institution, and I think that’s important.”

For Leeper, who says the study of history was an important part of both her graduate and undergraduate education, the Guardhouse Museum represents an important chapter for the university.

“We think in terms of stories, and we understand our world in terms of stories,” Leeper says. “That’s why it’s so powerful to think of the museum as not just a place where we hang old photos, but as a place that tells a story. And giving students a chance to add their own chapters to the story is exactly what a university does. Every class and every alumni group adds to our story.”

Built in 1866 at the entrance to the Augusta Arsenal, the small brick guardhouse at the corner of Katherine Street and Walton Way had fallen into disrepair by the early 2000s, and Ann Boardman wanted to do something about it.

“I grew up in that neighborhood, and we would play at what used to be the Augusta Arsenal,” she says. “We would play there because there were big grounds and there were cannons all around and stacks of cannonballs like pyramids. It was a great place to play.”

And playing there meant passing by the guardhouse.

“We were friendly with the guard at the gate because he would have to know who you were to let you in,” she says.

Her connection with the Arsenal didn’t end with childhood, however. Years later, her son-in-law would become a longtime employee at the school that grew up in the Arsenal’s place, and so when she made a donation to help restore the guardhouse she remembered as a child, she did it in honor of him.

“I just thought it would be a nice thing, because it was in bad shape, then,” she says. “It had cobwebs in it and it was closed up. It just needed to be saved.”