'STUDENTS ARE WHY WE'RE HERE'

Put in the 30 years that Katherine Sweeney (BA ’82, MPA ’99) put into Augusta University, and you’re going to see a whole lot more than a few.

So, in some ways, maybe it was fitting that she retired in the midst of the COVID-19 pandemic that had forced her beloved school — the place where she had earned two degrees, served several presidents and been through three name changes — to change one more time.

“I’ve been absolutely amazed at how the campus reacted to the pandemic and turned on its heels and figured everything out within the span of about 10 days,” she says. “And then how it was almost business as usual — or at least as usual as it could be with what was going on.”

Without minimizing the tragedies and personal hardships experienced by others, she admits she did face a few personal frustrations of her own.

“The first thing we were planning to do was travel, and the first place on the list was Italy,” she says. “But that’s OK — we’re still young enough to do it someday.”

Spend five minutes talking to her, and that kind of resilient positivity won’t surprise you, though the sheer number of words might. Katherine Sweeney says a lot, quickly, so if you don’t keep up, you’re liable to be left behind. Which, when you think about it, says a little something about how she’s coped with change.

Without that can-do attitude, she wouldn’t have been able to help students navigate the rocky stretches of their undergraduate careers, and without that ability to turn on a dime, she might not have made it beyond her first professional crisis.

In 1991, when she was assistant registrar, the registrar, who was also a good friend, died unexpectedly. Unsure what to do ­— she’d only been in her role for a year and a half ­— Sweeney called her mom, who had also worked on campus, for advice.

“She said, ‘You put on your stockings and your heels and your pearls and your skirt tomorrow morning, and you go into the acting president’s office, and you tell her that you will keep the registrar’s office under control and functioning until they find a new one.’ And I said, ‘Yes, ma’am.’”

“We were a small office, but it brought everybody closer together because we had to figure out what to do,” she says. “And I didn’t burn the building down, so in 1993, they offered me the registrar’s job, and I said, ‘Absolutely.’”

She remained registrar until the end of the decade when, after an unsuccessful search for a director of admissions, President Bill Bloodworth asked her if she’d be willing to take on both roles.

At the time she was also in the Master of Public Administration program, and as if that weren’t enough, admissions and the registrar’s office reported to two different vice presidents, which wasn’t going to be practical if one person was going to be serving both roles. So she had to figure out how best to handle that tricky situation.

“Dr. Bloodworth asked me what I would argue for, and I told him that to maintain consistency with the faculty I thought it best that I continue to report to the vice president of academic affairs, and Dr. Bloodworth said that made sense to him.”

Sweeney was then registrar and director of admissions for Augusta State University until consolidation, and when the opportunity came up for her to become director of academic advisement, she took it.

“I thought, ‘Well, this is a great way to close out the career, because I was going back to what I was doing when I started, which was helping students take the right courses along the way to graduation,” she says.

Actually, what she said was, “I’ll wash the windows if that’s what needs to be done.”
Originally, Sweeney’s plan was to retire in June 2020, but the pandemic knocked over enough dominoes that she decided to stay on until the end of the calendar year. However, because it didn’t look like all the holes that needed to be plugged would be plugged before she left, Sweeney decided to create a kind of playbook so anyone coming in would at least know why they were doing things the way they were doing them.

In a way, it was an unintentional nod to the figure-it-out-on-the-fly start she got at the registar’s office nearly 30 years before.

And although planning and preparation are essential to accomplish the things she and her areas have always needed to accomplish, she also knows that a good deal of the success that is achieved in those environments is due to knowing how to fly by the seat of your pants.

“I worked here for 30 years, but every single day I got asked questions I’d never been asked before, and that’s cool because we’ve always got new students, different students, new administrations, new faculty, and so everybody’s going to bring their own questions to whatever situation,” she says. “So that’s always kept it exciting, because I was never doing the same thing over and over again.”

Along the way, she was also president of the Alumni Association, and during that time, the popular Alumni barbecue event was brought back after a short hiatus. Though a far cry from the organized, catered event it would become, Sweeney says she enjoyed the grassroots effort of getting it up and running.

“It’s good to see people come together for a common cause and end up with a good result,” she says.

As Alumni Association president, she was an ex officio member of the Foundation board of trustees, and while there, she took the opportunity to thank them for the employee incentive program it funded at the time. Without the financial assistance the foundation provided for employees to further their education, Sweeney says the process of getting her master’s would have been a much slower one … if it had ever started at all.

“It think it was well-received by them to have an actual recipient of some of their foundation funds to be able to thank them, because other people at the university wouldn’t really have had the opportunity to thank them like that,” she says.

While no two days at work may ever have been alike, every day in some way involved looking out for students.

“For me, the personal contact with the students made the job what it was,” she says. “Of course, you’d find a way to adapt if you had to, but I was lucky in that every role I had was never far removed from the students.”

Sometimes she’d have students in her office looking for advice about what to do, and sometimes they’d be crying because of a grade they’d made on a test.

“If I can help a student figure out how to pick themselves up by their bootstraps and deal with an 85 on a test instead of a 90, or — perish the thought — a 50 on a test instead of an 80, that helps,” she says. “Because that’s a lot of what college is at the undergraduate level — how do you deal with what’s being thrown at you?”

And that’s one of the reasons why she’s so enthusiastic about the creation of the Academic Advisement Center, which offers students intentional academic planning and support by professional staff advisers, and the Academic Success Center, where students can take advantage of a number of free support services, including tutoring, academic coaching and success workshops.

For Sweeney, the attention given to dedicated student success represents the positive nature of change and the beneficial aspects of progress.

“We’ve got some good stuff going on — retention is better, progression is better, graduation rates are better, and selfishly I would say that’s because the university had the foresight to create university spaces like these and others whose only priority is student success.”

Students today are different than they used to be, she says. While many of them are still young people learning to find their way in the world, many others are in a completely different place than she was in school.

“When I went to school, school could be the priority,” she says. “And it was. You started in the fall, and four years later in the spring, you walked across the stage and thought, ‘OK — now I’ll get a job.’ But it’s not like that anymore.”

However, with the Augusta University brand taking hold and with it an understanding of the opportunities and advantages that come with it, she’s noticed a welcome buzz on campus.

“Students are really starting to wear the gear,” she says. “They’re wearing the Augusta University clothes, and I think as we build this brand, students are realizing the value they’re getting.”

It’s part of an evolution that began with the reimagining of the campus.

And that’s one of the things she loved being Alumni Association president: rubbing shoulders with the different generations of alumni.

“The common thing was the school we went to, but each of those schools we went to, depending on our age, was very, very different,” she says. “So swapping stories about the things we did and the places we hung out was kind of neat.” 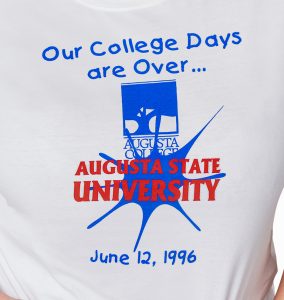 A faculty member, Ms. Mary Lisko, in the Hull College of Business, framed one of the shirts for posterity, and when she retired, she gave it to Sweeney. And although now Sweeney’s college days may be over, too, her legacy lives on — not just in the way she influenced the students, faculty and staff she encountered over the last 30 years, but through the scholarship her husband created in her honor.

“The university did an awful lot for me, and so I feel as if giving back to the university is a good thing to do,” she says.

Donate directly to the Katherine H. Sweeney Scholarship Endowment.
For information about other ways to give back to the university, visit the giving page.