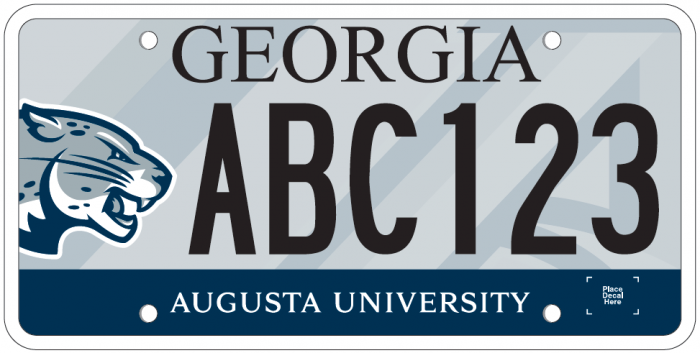 With the purchase of the new plate, you will not only be able to display your Jag pride everywhere you go, but your purchase will help the newest generation of university students have access to the same great educational opportunities on our campuses that you did.

Annual renewal fees and $10 from each sale will go to support student scholarships, so it’s a great way to give back to the institution — and invest in the future of our community and state.

The plates are branded Augusta blue and feature our Jaguar mascot, Augustus, displaying his new game face. Wherever you drive, people will recognize you as a proud member of the Jaguar Nation, now and forever. It’s also a great way to spread awareness of our university and generate interest from potential students.

To purchase the plates, visit the Georgia Department of Revenue website at dor.georgia.gov and select “License Plate Samples.” If your car has one of the previous license plate designs, make the switch today since this is now the only specialized plate for the university.

Board of Governors honoree, Dr. Sidney A. Bell (MD ’67) was selected as one of the recipients of the 2016 Heart of the Community Awards of Honor sponsored by Redmond Regional Medical Center and the Heart of the Community Foundation Inc. to honor local citizens for their volunteer service to the Rome, Georgia, community.

Dr. Mary Jane Hamilton (BSN ’60), founding dean of the College of Nursing and Health Sciences at Texas A&M University-Corpus Christi, announced her retirement. In 2015, Hamilton received a resolution from the Texas House of Representatives for achievements in the nursing profession. She was also honored that same year as the Augusta University Distinguished Alumna.

The American College of Nurse-Midwives recognized Dr. Holly Powell Kennedy (MSN ’78) as an Exemplary Midwifery Leader. Powell received her certificate of midwifery from the Frontier School of Midwifery & Family Nursing, Hyden, Kentucky, and a doctorate in nursing from the University of Rhode Island.

Dr. James Scott (MD ’72) of Tifton, Georgia, was appointed to the Georgia Board of Athletic Trainers by Gov. Nathan Deal.

Dr. James Douglas (MD ’89) of Rome, Georgia, was honored for his contributions to medical education at Mercer University School of Medicine and as a dedicated community-responsive physician.

Dr. Marc Miller (BBA ’87), executive director of Economic Development and Entrepreneurial Engagement at Augusta University, was named dean of the School
of Business at Henderson State University
in Arkansas.

Dr. Mark Murphy (MD ’88), gastroenterologist, was named president of the Savannah Book Festival’s board of directors. Murphy is a founding partner of The Center for Liver and Digestive Health in Savannah, Georgia.

Dr. James L. Newsome (MD ’81) of Alabama was recognized as a VIP and as a Top Doctor by the Global Who’s Who. The Global Directory of Who’s Who honors outstanding executives and professionals in all fields including law, health care, finance, technology, design and engineering.

Ricky Beale (BS ’95) will take on double duty as head coach of the Evans High School baseball and softball teams in Evans, Georgia. Beale is in his first year coaching the softball team, and he’s still active as head coach of the school’s baseball team. A member of two state championship baseball teams, Beale graduated from Evans in 1990, then obtained his undergraduate degree from Augusta University.

Dr. Bret Clark (PhD ’95), professor of biology at Newberry College in South Carolina, was one of 20 faculty selected from the member institutions of the South Carolina Independent Colleges and Universities for recognition at the organization’s 11th annual Excellence in Teaching Awards Dinner.

Dr. George Hall (DMD ’93) recently began his appointment as director of the UNC School of Dentistry Advanced Education in General Dentistry Program and is also a clinical associate professor in the Department of Operative Dentistry at UNC.

Dr. Deborah Natvig (PhD ’93) recently received the 2016 Distinguished Alumni Achievement Award from Minnesota State University, Mankato. The award is presented
to graduates who have achieved high rank
or honor in their professions, have a widespread effect on their communities, and are recognized for their achievements over the course of their careers.

Dr. Ronald T. Stephens (MD ’90) was promoted to brigadier general during a ceremony held at Fort Bragg this May. Stephens is now the top Army medical officer at Joint Base Lewis-McChord, Washington.

Georgia Department of Corrections Commissioner Homer Bryson announced the promotion of Scott Wilkes (BA ’92,
MS ’95) to the position of warden at Augusta State Medical Prison. As warden, Wilkes will be responsible for overseeing 447 staff members and 1,326 close security male offenders.

Jackie Cirilli (BSN ’08) was one of four pediatric nurses presented with The Laura Snitzer-Boozer Nursing Award by the Aflac Cancer and Blood Disorders Center of Children’s Healthcare of Atlanta. The award honors nurses who have demonstrated professional excellence and leadership in hematology/oncology care, as well as provides financial support for continued education in the field of oncology.

Dr. Chad Epps (MD ’00) was named executive director of the new Interprofessional Simulation and Patient Safety Center that is being constructed at the University of Tennessee Health Science Center. Epps is president of the Society for Simulation in Healthcare and past chair of the Council on Accreditation of Healthcare Simulation Programs.

Dr. Melanie Hafford (MD ’07), general and bariatric surgeon, joined the Medical and Surgical Clinic of Irving, Texas. After earning her medical degree at MCG, Hafford conducted her general surgery residency at UT Southwestern and attended the Methodist Hospital in Houston, Texas, where she completed a bariatric and minimally invasive surgery fellowship.

Sabrina Jones (MA ’04) was awarded a 2016 Woodrow Wilson National Fellowship Foundation Georgia Teaching Fellowship. The fellowship focuses on preparing top-quality educators for many of Georgia’s most underserved public schools. The fellowship was designed to address a shortage of STEM (science, technology, engineering, mathematics) teachers in Georgia.

The Novant Health Foundation Rowan Medical Center in North Carolina selected Fran Misner (MPMT ’05) to serve on their board of directors. In addition to working with the Foundation, she volunteers her time with the Historic Salisbury Foundation, Prevent Child Abuse Rowan, the Rowan Medical Society Alliance and First Presbyterian Day School.

Carrie Smith Nold (MPA ’09) is now an assistant professor in the Physician Assistant Studies program at the Philadelphia College of Osteopathic Medicine in Suwanee, Georgia. Before joining PCOM, Nold worked clinically as a physician assistant at the Medical University of South Carolina in the Neuroscience Department.

Dr. Brian K. Stansfield (MD ’04), neonatologist at Children’s Hospital of Georgia at Augusta University, received the 2016 Clinical Science Young Investigator Award from the Southern Society for Pediatric Research. The award recognizes exemplary work addressing a clinical or basic science problem by an early career investigator. Stansfield received the award for his studies of cardiovascular and related risks associated with being a low- or high-birthweight baby.

Dr. Afua Akhi-Gbade (MD ’16) is the 2016 recipient of the Georgia Academy of Family Physicians T.A. Sappington Award. This prestigious award is given to student members who have demonstrated their commitment to family medicine by choosing to attend a Georgia Family Medicine Residency Program. Akhi-Gbade plans to attend the Emory University Family Medicine Residency Program in Atlanta.

Jake Amos (BA ’10) was hired as associate head coach of the Gamecock men’s golf program at the University of South Carolina. Amos was a member of the Jaguar men’s golf program at Augusta University that won the 2010 NCAA Division I Men’s Golf Championship, the school’s first national title. After graduation, he served as a volunteer assistant in 2011 as the Jaguars repeated as NCAA champions.

Ashlyn DeLoach (MHS ’15) appeared on The Ellen DeGeneres Show. DeLoach is an occupational therapist at a number of low-income schools in Brantley County, Georgia, and devotes her time to working with children in need of special attention, helping them develop and learn, but many of the schools she works with are lacking in technology and supplies. While visiting the show, DeLoach and her husband, Brett, were surprised by Ellen and her friends at Shutterfly with Apple iPads for her students and $50,000 toward the purchase of school supplies and technology needs. ellentv.com/2016/01/11/a-50k-shutterfly-surprise/

Jasmine Jarrard (MPA ’13) joined Lake Oconee Urgent & Primary Care Center as a physician assistant. Jarrard also holds a Master of Public Health degree with a concentration in health promotion and behavior from the University of Georgia.

Christine Sage (BSN ’12), a cardiac care nurse, was named a “Daisy” award winner at Emory Hospital. For 15 years, The DAISY Foundation has been recognizing the compassion and skill direct care nurses bring to their patients every day.

Dr. Lovoria B. Williams (PhD ’11), an associate professor in Augusta University’s College of Nursing, was inducted into the Fellows of the American Association of Nurse Practitioners. The FAANP program recognizes nurse practitioner leaders who have made outstanding contributions to health care through clinical practice, research, education or policy.