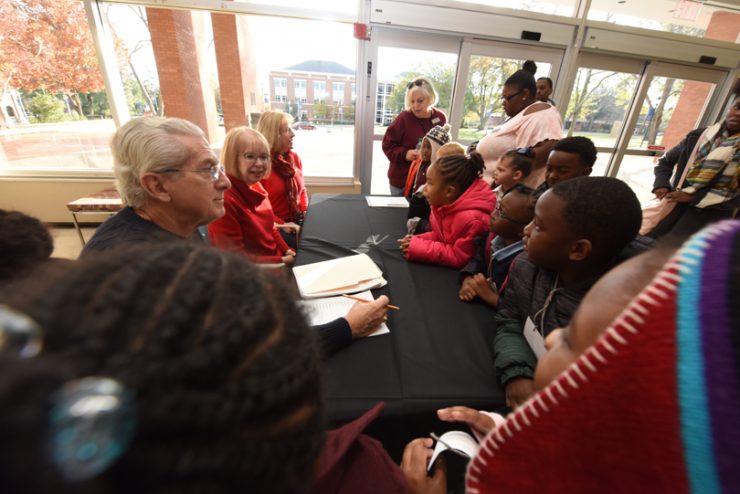 In the Field: Never an Empty Seat

Typically, a university’s impact is judged by the way it shapes the destinies and broadens the horizons of its students, and when you’re a comprehensive research university, particularly one with the state’s only public medical college and its only dental college, your impact expands to include innovations that directly affect the everyday health and security of the greater community.

Beyond that, however, Augusta University has a long track record of influencing some of the youngest among us.

Founded by Dr. Paulette Harris in 1990 as a way to help improve adult literacy in the community, the Augusta University Literacy Center quickly grew to provide literacy education for all ages and now offers tutoring for adults, school-age children and preemergent children who don’t possess the necessary pre-reading skills to be successful in the classroom.

One of the most visible and eagerly received elements of the program, the Literacy Center’s Children’s Play Series, is so popular that it pulls audience members from as far away as the Statesboro area. And that’s with no marketing. Because supply is pretty much overrun by demand, most shows have around 300 reservations mere weeks after the season’s schedule is posted and no empty seats for the performances themselves.

Even last year’s Golden Goose, which occurred as Hurricane Michael was blowing through the area, was very nearly a sellout.

What’s to be learned from an early exposure to the theater? According to Harris, plenty.

“We talk to them at the very beginning about theater manners so they know beforehand that there will be times when we ask them to stomp their feet and clap their hands, but there will be other times where we need to be quiet,” Harris says.

Like all the services provided by the Literacy Center, the plays are free, which Harris maintains is vital since the majority of children would not be able to participate if required to pay.

And though she’s always excited by the community’s response to the plays, she’s particularly enthusiastic about next year, when she’ll be able to add an extra show to each of the four performances.

Think there’ll be any empty seats?