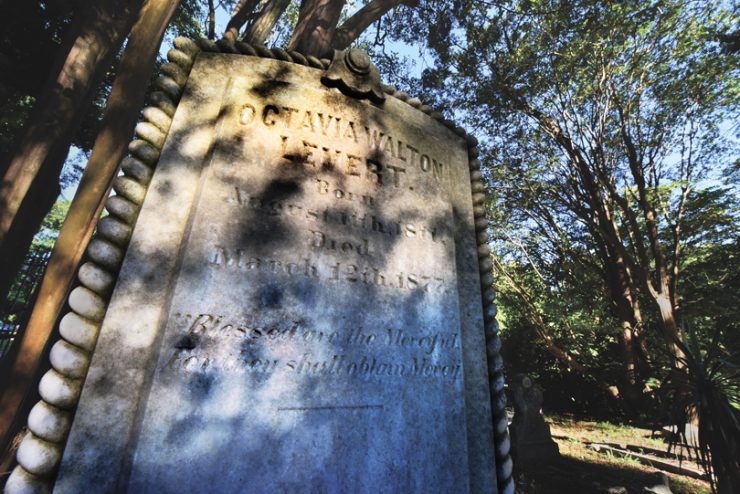 History and Heritage: A Family Legacy

According to legend, the Octavia in question was Octavia Walton LeVert, one of the best-known women in the Antebellum South. She was well-educated, spoke several languages, and was known for her parties and her friendships with prominent figures, like Washington Irving and three-time presidential candidate Henry Clay.

Born in Augusta, LeVert was the granddaughter of George Walton, one of Georgia’s three signers of the Declaration of Independence. LeVert’s father, George Walton Jr., was appointed governor of Florida when the state was still a territory. It is rumored that it was Octavia who named the capital city of Tallahassee.

Octavia eventually married Dr. Henry LaVert, and the couple settled in Mobile, Alabama, where Octavia LaVert’s support of the Union during the Civil War earned the ire of the locals. Following the death of her husband in 1864, LeVert returned to Augusta. Octavia LaVert died on March 12, 1877. She was buried in the Walker Family Cemetery. Her children are buried beside her.

Several other notable Augustans were also laid to rest in the Walker Family Cemetery, including Freeman Walker, a United States senator and the first mayor of Augusta. In the early 19th century, Freeman Walker and his younger brother moved to Augusta, where they planned to study law. Their older brothers, George and Robert Walker, were already living in Augusta. The brothers eventually bought various properties around Augusta, including property lining Arsenal Avenue, which would eventually become the Augusta University Summerville Campus.

As was common at the time, the Walker family decided to designate an approximately one-acre portion of their plantation land to be a family cemetery.

In 1826, Freeman Walker sold a parcel of land to the government for $6,000. This land would become the U.S. Arsenal, but there was one condition to the land purchase. The cemetery would be preserved. Freeman Walker passed away a year after selling his land and was buried in the Walker Family Cemetery. Years later, the Arsenal was purchased for the Junior College of Augusta (now Augusta University), again with the condition that the cemetery be preserved.

The Walker Family Cemetery is located on the Augusta University Summerville Campus near the Arsenal Cemetery and continues to serve as the burial grounds for Walker family members.