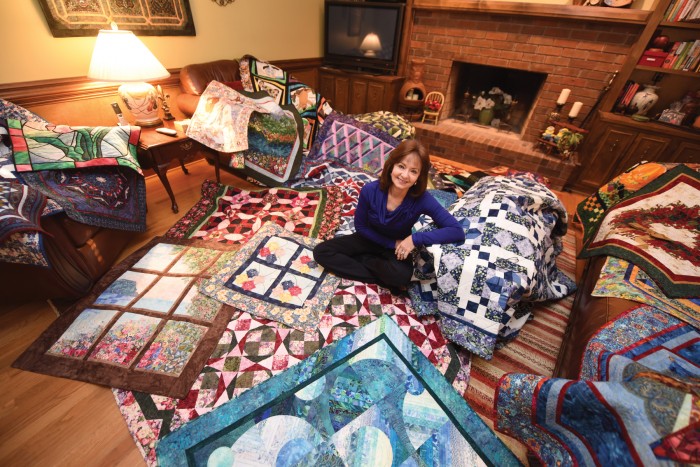 Dr. Gretchen Caughman has been defying expectations since she was a graduate student at the Medical University of South Carolina, when she applied for – and won – a National Science Foundation grant without consulting anyone else at the university.

“I was naive and figured it was just like a contest entry where you fill it out and see if you win,” she laughs. “When I got the award notice, I took it into the main office, and they kind of went, ‘Did we know about this?’” They may not have known, but they were pleased.

Now provost and executive vice president for academic affairs, the versatile Caughman is probably best known for being a constant, steadying influence during a period of tremendous change, but many are surprised to learn that she has a secret life in what is often perceived to be an almost antiquated pastime: quilt making.

University administrator/quilt maker. The two sides just don’t seem to be a part of the same coin, but here Caughman insists she’s not the only one defying expectations. “I think many people who haven’t seen modern quilting have an idea that it is kind of that old fashioned, stodgy kind of thing that only your grandmother would be interested in,” she says. “But there are just remarkable works of art that are being created out there, and they’re definitely not what Grandma had on her bed.”

Growing up a sewer – not only did she make most of her clothes in high school, she made her wedding dress, too – she first became interested in quilting around the year 2000, and soon after that she got the idea of making a quilt to decorate the wall space in her new office when she was appointed dean of The Graduate School.

She hasn’t looked back since, though it’s never been just about the finished product. She finds the meditative quality of stitch work relaxing after the chaos of her work day. And while she works in a converted bedroom that has its share of technology, when it comes to design, she mostly forgoes the computer programs in favor of putting scraps of cloth on her flannel-covered design wall.

“There’s something much more satisfying about having your hands on the fabric,” she says.

Most of her quilts are given away or will be passed down to her two sons, though she does admit to being interested in the competitive world of quilt shows. But not just yet. She’s still got some work to do on the biggest quilt of her career: Augusta University.