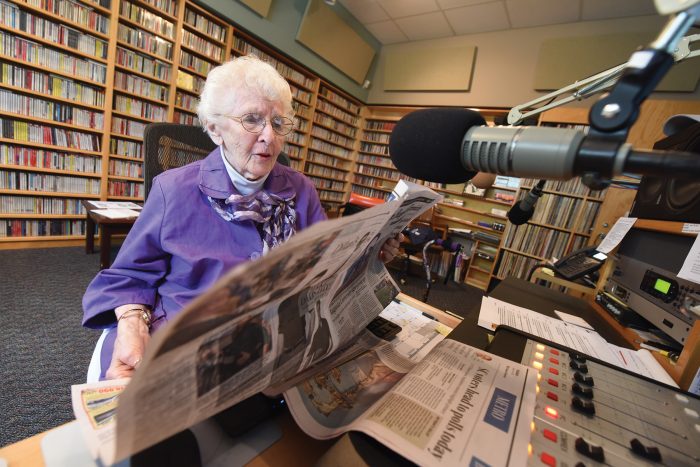 In the Field: Through Another’s Eyes

It’s 10 a.m. on a Tuesday morning. In a routine repeated nearly 2,000 times over 35 years, nonagenarian Naomi Monge sets the morning’s Augusta Chronicle in front of her on the desk and reaches for the phone. She dials a number in Atlanta; when connected, she puts the receiver down, pulls the microphone toward her, greets her audience and begins to read.

And in homes throughout the CSRA, over special receivers or streamed live via the internet, people listen to her familiar voice — she imagines with a cup of coffee in hand — and get the day’s news.

The dial-in technology is dated, but her listeners don’t notice or care. For them, her voice is a link to their community and world that allows them to stay independent and informed, in spite of visual or physical impairments that impede their ability to read.

Monge volunteers each week at Georgia Public Broadcasting’s Augusta University radio station, WACG 90.7FM, as part of the Georgia Radio Reading Service (GaRRS). She started in 1981, a year after GaRRS launched, having learned of it from her late husband, Bill, who arranged for the two daily hours of local programming time when he was interim president of
Augusta College.

She is one of 250 volunteers around the state who deliver more than 200 radio programs each month, providing audio news and entertainment to thousands of Georgians who might not otherwise be able to get it.

Programming runs 24/7, with most originating in Atlanta. In Augusta, WACG Assistant Station Manager Laura Coleman manages the volunteers — who over the years have included students, faculty, alumni, local leaders and community members — who read from 10 a.m. to noon every weekday for broadcasting to the radio station’s local coverage area. The first hour is news, and the second is reader’s choice; most choose to read their favorite books.

On this Tuesday, the 10 a.m. hour has passed, and the next volunteer is ready to take over. Director of the Morris Museum of Art Kevin Grogan is a very busy man, but for 13 years each Tuesday at 11 a.m., he has taken time out of his day to read some of his favorite books — he’s partial to history — to those who can’t.

“It’s just a way to give back to my community,” he said. “And an opportunity to share things that I enjoy reading myself.”

ONLINE EXTRA: See Mrs. Monge with recipients of a scholarship she established in honor of her late husband.