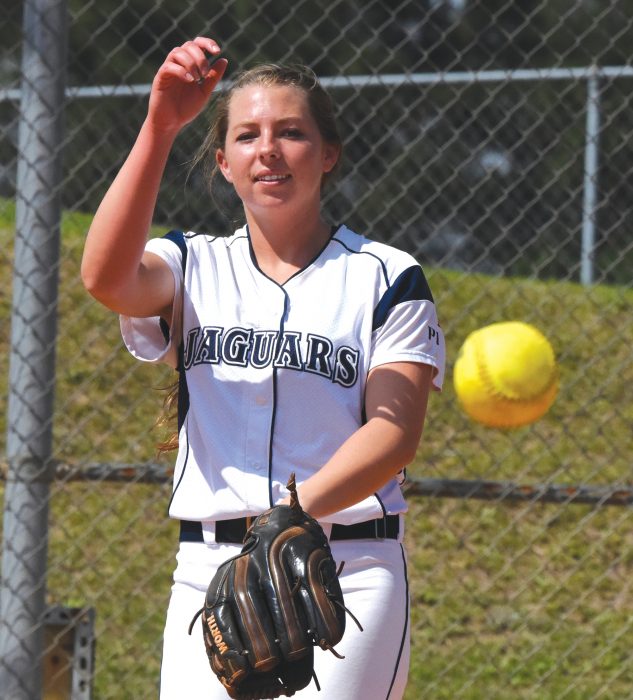 Value Added: ‘Give Them a Boost’

All that stood between her and a Bachelor of Science in Kinesiology was an internship. Previous summer courses she’d taken during her four years studying and playing softball at Augusta University had cost around $1,000.

Then she learned the required internship was 15 credits — and it would cost as much as a full semester. For an out-of-state student-athlete whose scholarship eligibility had run out, the news came as quite a shock.

“I called my mom, and I was crying,” said Paige Deschaine. “What was I going to do?” Then Coach Melissa Brocato told her about SCOPE.

Bill asked Bryant about the athletics program’s greatest needs. “He told us some could use an extra boost when their scholarships run out,” Betty recalled. “Bill said, ‘I think that’s what I’d like to do — give them a boost.’”

Thus was born the Sherrill Classic Order Physical Education scholarship. Since the Sherrills began funding it in 1997, 112 student-athletes whose scholarships ran out before they completed their degrees have received one. All — male and female athletes from nearly every university team — subsequently graduated.

The Sherrills’ roots run deep in Augusta. Betty grew up here, the daughter of Elizabeth and Marion Norvell, founder of Norvell Fixture & Equipment Company. She met Bill while attending college in his hometown of Montgomery, Alabama. They returned to Augusta in 1960, when Bill’s father-in-law asked him to join the business.

Bill, an avid tennis player and sports fan, became an enthusiastic member of the Jaguar Nation. Two of their children are Augusta College alumni. Will Sherrill III attended AC on a tennis scholarship and is a principal in the family business; Lisa graduated from the nursing program.

Bill and Betty were married for 59 years until his death in 2014. Bill was a founder of the Jaguar Club, and in appreciation for his steadfast and substantial support over many years, the annual William S. Sherrill Athletics Awards Banquet is named in his honor.

When Lee Rose reached the end of his baseball scholarship eligibility in May 2006, he was a few credits short of graduation. He applied for and received a SCOPE scholarship.

After graduating, Rose went to Norvell Fixture & Equipment Company to apply for a job.

“I met Bill Sherrill,” Rose said. “He commented that he funded a scholarship at my school. I said, ‘I am a direct beneficiary of that scholarship!’”

Rose got the job. Today, he is a sales representative for Norvell’s in Savannah and Southeastern Georgia.

“He had a big heart,” Rose says of Bill. “He really cared about the student-athletes and Augusta.
I owe him a big debt.”

As for Deschaine, she was able to complete her degree and continue her plans for graduate school.

And so, with just a boost, another
dream realized.

In the Field: Through Another’s Eyes