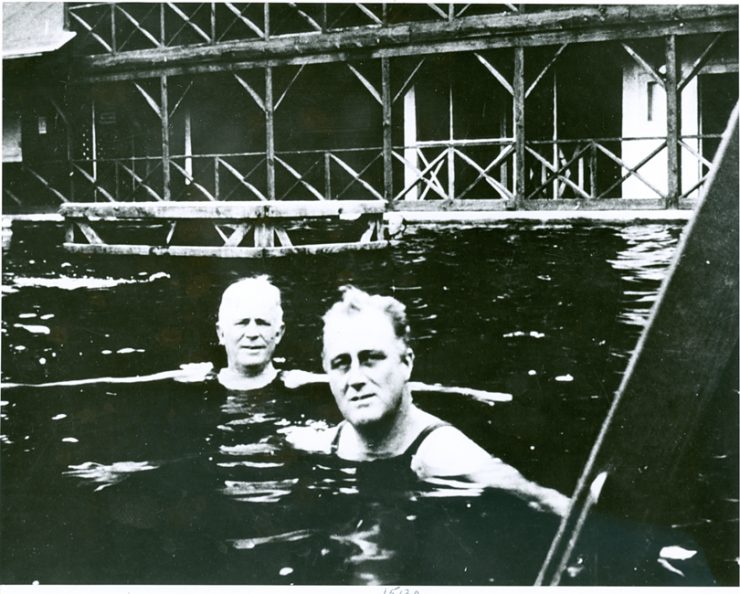 As president, Franklin Delano Roosevelt led the United States through two of our history’s greatest challenges, the Great Depression and World War II.

But 11 years before his first term, Roosevelt faced a personal challenge that required he draw on the same strength and determination he became revered for in office. At the age of 39, he contracted polio, a disease that left him paralyzed from the waist down for the rest of his remarkable life.

True to his nature, he chose to fight the disease, seeking and practicing therapies that could improve his condition. That determination led him to the healing waters of Warm Springs, Georgia, where he founded a facility dedicated to the rehabilitation of polio patients like himself. He visited throughout his life and died in 1945 in a cottage he had built on the grounds.

Fifty years later, great-grandson Matt Roosevelt, then 12, visited the facility with his family to attend a ceremony honoring FDR.

“President Clinton gave a speech for the Four Freedoms Award ceremony,” he recalled recently. “I didn’t tour the hospital — my impression was that the hospital wasn’t in very good condition.”

In May, nearly a quarter century later, Dr. Matt Roosevelt, an internist in San Diego, again visited what is now Roosevelt Warm Springs Rehabilitation and Specialty Hospitals and found that much had changed. AU Health assumed management of the facility in
June 2013.

“I was really impressed with the infusion of enthusiasm and capital at the hospital through the affiliation with Augusta University,” he said. “It’s really a nice facility — the type of place I would want to send my family to.”

Dr. Roosevelt is particularly interested in medical education opportunities offered there, seeing it as a continuation of his great-grandfather’s vision.

“Polio was a relatively new epidemic, so rehabilitation from polio was also new,” Dr. Roosevelt said. “Both teaching and healing were always an important part of its mission.”

So, he was pleased to be able to spend time with students while at the facility. Shelby Jennings, completing a 12-week rotation for the AU Master of Occupational Therapy program, was among a group of students who met with him over lunch.

“It was so cool to hear him talk about being there as a kid,” she said. “He picked our brains about what we thought about the facility, and we got to ask him questions about his great-grandfather.”

Jennings said the internship was valuable to her education and career.

“The experience was absolutely amazing,” she said. “It’s a real teaching hospital. They’re just good people there, and they’ve had so many students, they knew exactly what I needed.”

Shortly after the visit, the Roosevelt Warm Springs Foundation announced a grant of $62,000 to refurbish a historic cottage to house student interns and to purchase special equipment for swallowing studies in patients. The foundation’s current mission is to support organizations helping people with physical disabilities, particularly those dealing with various aspects of polio.

Dr. Roosevelt said the visit cemented the desire to contribute.

To learn how you can help support education and health care at Augusta University, contact the Office of Advancement.

In the Field: Hope Locally Grown