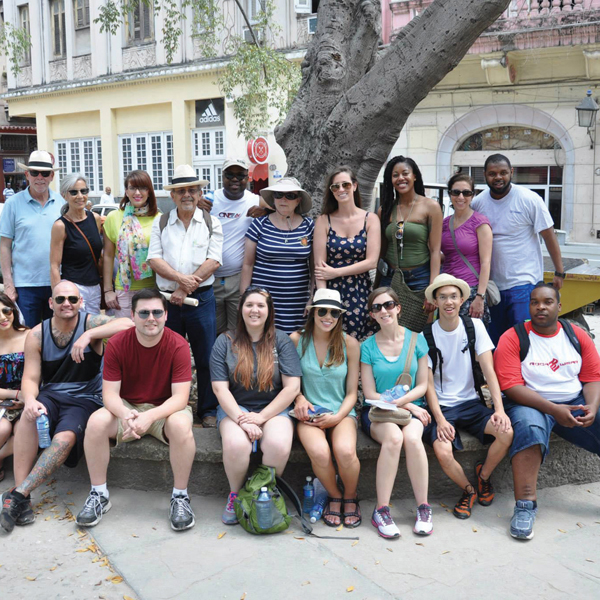 THE HULL COLLEGE OF BUSINESS

While most students were relaxing over spring break, 15 Hull College of Business students spent the week studying international business in the communist country of Cuba with Professor Don Howard. The course began with classroom study of international politics, culture, economics, finance, marketing, and management in a global environment. During the travel portion of the program, students visited with University of Havana professors, local business professionals, and entrepreneurs to experience the culture and economy firsthand. The group also traveled to the tobacco-growing region about two hours outside of urban Havana to interact with farmers and small business owners. Next year’s trip will be “Cuba 2016: A New Day Rising!”

Dr. Lovoria Williams, Assistant Professor in the Department of Biobehavioral Nursing, is the principal investigator of a GRU Cancer Center initiative that received a $1.75-million grant from the Bristol-Myers Squibb Foundation. The goal of the initiative, called c-CARE (Cancer Communication Access Research and Education), is to reduce the burden of cancer among minority and underserved populations in Georgia.

Short term, c-CARE is designed to increase compliance with prevention and early detection recommendations and ensure access to needed services. The long-term goal is to reduce new cases and deaths from largely preventable cancers.
C-CARE will be implemented at 12 sites across the CSRA, including churches, community clinics, and the KROC center. 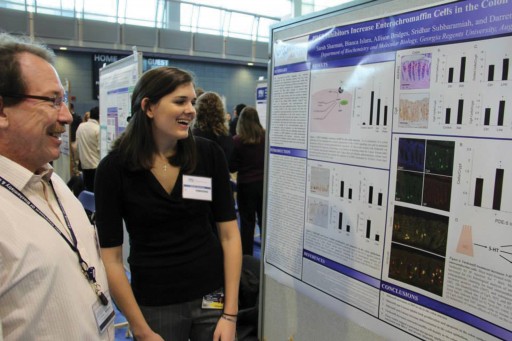 The Graduate School hosted the 31st-annual Graduate Research Day in March, where graduate students from six GRU colleges, UGA pharmacy students, and residents and fellows from the GRU Department of Internal Medicine presented 99 posters. In addition, there were 23 plenary presentations from MCG postdoctoral fellows.

The keynote speaker was Dr. Leroy Hood, one of only 15 members of all three National Academies. Dr. Hood is a systems biologist and researcher who helped pioneer the Human Genome Project and develop automated DNA sequencers and is currently cultivating his vision for health care through his Institute for Systems Biology’s P4 pilot project. P4 medicine stands for predictive, preventive, personalized, and participatory.

The Phoenix, GRU’s award-winning student-run magazine, in March added two more accolades, both from the Society of Professional Journalists.

The Phoenix editorial staff — Editor-in-Chief Matthew Johnson, Assistant Editor Anna Garner, Creative Director Drew Greiner, and Business Manager Kaitlin Keller — was a finalist in the best magazine category, and Erica Ruggles won the Region 3 feature story category for “Hooked,” her first-person account of flesh suspension. As a regional winner, Ruggles’ story will go on to compete for best feature at the national level. Read it at issuu.com/gruphoenix/docs/new_ phoenix_fall_2014.

Asthma rates among black youths living in urban Detroit and rural Georgia are essentially the same, according to research conducted by Drs. Dennis Ownby and Martha S. Tingen in collaboration with researchers at Henry Ford Hospital in Detroit. This finding conflicts with the widely held theory that city life is a risk factor.

Their findings instead suggest that asthma is a disease of poverty and poor housing, where environmental triggers such as mold, fungi, cockroaches, mice, dust mites, and even strong odors may be pervasive and easily permeate paper-thin walls. Children may get additional exposure in unkempt school buildings, and relatively low health literacy, such as awareness that tobacco smoke is an asthma trigger, may also be a factor, noted Tingen, the study’s co-principal author.

Ownby is an allergist-immunologist at MCG, and Tingen is Co-Research Director of the GRU Children’s Research Unit and Charles W. Linder, M.D. Endowed Chair in Pediatrics.

Ana Luz Thompson, Professor and Chair of the Department of Dental Hygiene, authored a coloring book, “Keeping Up With Your Smile,” geared toward minority elementary-aged students. Available in English and Spanish, the coloring book is designed to familiarize students with the sights and sounds of a regular cleaning and check-up, as well as teach them basic oral hygiene. Thompson worked with GRU’s Office of Innovation Commercialization to publish the coloring book, which has already been used by dental students on mission trips across the world. The coloring book may be purchased through the bookstore at jagstore.net.

The College of Dental Medicine honored longtime volunteer Dr. Jane Martone with the naming of the Dr. Jane F. Martone AEGD/GPR Resident Office. Faculty, past residents, and students raised roughly $30,000 in appreciation of Martone’s work and service graciously donated for more than 15 years. Martone maintains her own full-time private practice in Westfield, Massachusetts, yet flies to Augusta on her own dime and drives a car she keeps here to a home she has purchased in Martinez so she can volunteer for a week each month in the AEGD/GPR clinics. The college is ever grateful for the generosity and commitment Martone has made to the residents, the college, and the profession.

The College of Education held its Response-to-Intervention Workshop in April with close to 300 teachers from local school districts in attendance — the largest attendance to date. This program educated teachers on the multitier approach to the early detection of students with learning and behavior needs. Sessions featured highly acclaimed speakers who spoke on topics such as working with students with autism, bipolar disorders, and disruptive behaviors.

COLLEGE OF SCIENCE AND MATHEMATICS

Twenty-two students were honored at the College of Science and Mathematics Honors Recognition Ceremony in March. Included among the highest honors winners: