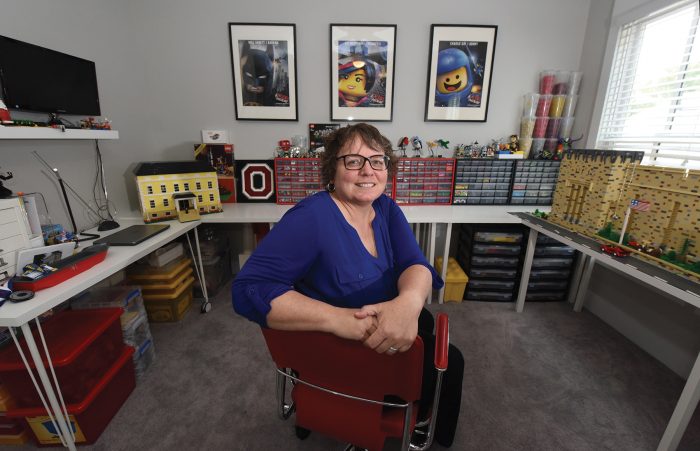 Had Kim Davies ever really played with Lego as a kid – and just to be clear, the colorful little bricks are called Lego, not Legos – 2012 would have been considered the end of her Dark Age, that time when Adult Fans of Lego, known as AFOLs, return to the iconic bricks they enjoyed playing with as children. But since Davies never really had much to do with Lego growing up, she didn’t have a Dark Age. Instead, after finishing remodeling a house with her wife, Lorraine, what she had was time to fill. So one day, she went to Barnes & Noble for a jigsaw puzzle, came back with a Lego kit, and now, she has a Lego Room in her house.

That room is home to her supplies, several completed kits, a replica of Fanning Hall and one of the massive Eastern State Penitentiary, which took first place at the 2016 Philly Brick Fest. In the Lego World, winning a “Rocky” as it’s known is a very big deal, but she almost didn’t have room to get the award back home: hitting the road with the oldest prison in the United States took 11 crates and nearly every inch of her SUV.

People with hobbies that take up that much space and require that much legwork don’t usually fly so far below the radar, but no matter how many times she hits the Lego stores in Charlotte or Atlanta or how often she makes the circuit of far-flung Walmarts snooping for deals, Davies says deciding to come clean about the pastime is never easy.

“People in the Lego community talk about this a lot – do you tell your friends and family,” she says. “At first, I was quiet about it, because it does seem something that’s kind of silly, but when we had our new house built and invited people to see it, we had to decide if we were going to show people the whole house.”

Ultimately, they did, so while it’s not really been a secret since then, it hasn’t exactly been widely known among her students and peers, either … until now.

Now, not only has her replica of the newly opened Oak Hall been immortalized on the cover of A., plans are in the works
to display the finished product in a prominent location at
the University.