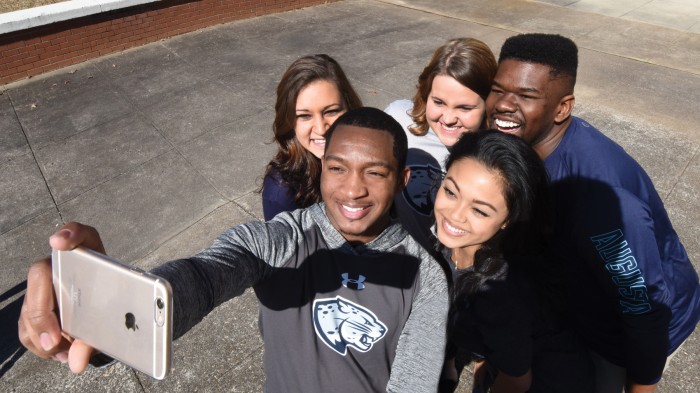 We thought that the clarion call of the bell could bring everyone together in a way that reflected the university.

Campus and community blown away by Augusta University’s new brand

At 8 a.m. on Jan. 21, 2016, the day the new Augusta University branding was unveiled, 1,000 brand starter kits were hand-delivered across the institution, and by the time the first of the Swag Stops had opened, exchange tables giving faculty, staff and students the opportunity to swap legacy-branded merchandise for a new Augusta University T-Shirt, the verdict was in.

The new look was a success.

“I am just overwhelmed and blown away at how great all this stuff really looks,” said President Brooks Keel, wearing a newly branded cap in front of the Swag Stop on the Health Sciences Campus. “I think it really sets the stage for where we’re going.”

As soon as the Board of Regents announced the name change back in September, everyone involved knew that the visual identity created to support the new name had to be done right. This was the name – and the look – that would endure.

“I’ve never been more excited and more scared at the same time,” said Daniel Stewart, studio director at Wier/Stewart, the local firm hired to create the university’s new brand identity. “There’s not another thing that we could do that we would see more than the Augusta University branding.”

To get it right required more than just creatives bouncing ideas off each other. It required research. A lot of research.

“I think the most challenging aspect of the rebranding was also probably the most important, and that was getting the design study right,” said Jack Evans, vice president for communications and marketing. “There are so many people who are so passionate about representing the university and so many different ideas about how it should be captured and how it should be portrayed. It was really important for us to get a study together that could help people understand the different roles that the different parts of the visual identity system play.”

Tying together the vast parts of the organization in a way that was both symbolic and meaningful wasn’t easy. Far more than a logo, the new visual identity is a system built upon the idea that everything – the three Augusta campuses, the medical center, the satellite campuses and the practice groups – is part of the Augusta University whole.

Called a monolithic approach, the system serves as the visual identity for everything under the Augusta University umbrella, which creates a stronger brand awareness for everyone.

“We wanted a monolithic branding strategy so that the world would know that, whether you were interfacing with our Philosophy Department or visiting one of our clinics or attending one of our performances, you were engaging with an organization that was excellent, that was outstanding and was all part of Augusta University,” said Dr. Karla Leeper, executive vice president for strategic communication and chief marketing officer.

Finding that unifying, inclusive image was difficult because there was no one thing that was immediately recognizable as representing everything. But while there may not have been any one physical thing uniting it all, there was, however, an idea: bells.

Ringing bells has traditions across the organization. Historically, the Summerville bell would ring for important events, and on the Health Sciences Campus, bells are rung when babies are born at the medical center and when patients finish their last round of chemotherapy at the Cancer Center. Our student newspaper has been known as the Bell Ringer since 1958.

So the design team expanded on that idea, incorporated architectural cues from the Augusta community and came up with the shield: an A-frame bell tower in a U-shaped shield.

“We thought the clarion call of the bell could bring everyone together in a way that reflected the university,” Evans said.

To further develop this idea, bell towers could be constructed at multiple locations so that the bells could ring simultaneously during significant events, like commencement or winning a national championship.

When compared against similar brand elements from other institutions, it was important that all the marks developed for Augusta University were consistent with, but distinctive from, those of its aspirant institutions.

“We used a grid as we were comparing marks to make sure our stuff was appropriate,” said Samantha Mellinger, part of the Wier/Stewart team. “It was challenging, but we knew we were on the right track.”

To check their work on the university seal, they were even more stringent, putting it on a chart with 40 other university seals. On close inspection, the seal, which appears on diplomas and on other official documents, is a unique celebration of Augusta University’s diverse heritage, with a torch representing education, research and healing, oak leaves representing Summerville’s Arsenal Oak, and the columns and pediment of the Old Medical College representing the Health Sciences Campus, all enclosed in the marks of the Summerville sundial, which stand for the university’s history, progress and potential.

While such attention to history was important, equally important was how the brand would resonate with the greater community.

“Augusta is a college town,” Evans said. “That was sort of the design mantra. The communications and marketing team and our consultants all carried that with us. We wanted to make sure we reflected that and captured that energy with the brand.”

The victory A and the athletic wordmark represent dramatic departures from past looks, while the updated jaguar retains many of the visual elements fans had expressed a fondness for.

“It’s the jaguar, but now he has a game face,” is how Athletic Director Clint Bryant put it. “The new jag is about the new university. It’s a whole new jaguar, so I think it represents the consolidated university very well.”

With banners up around Augusta and people wearing the new brand becoming more and more commonplace, it’s obvious the new look has been embraced.

“I think we’re going to see a lot of community pride around the new designs,” Evans said. “That’s part of the strength of the array of visual identity that we have. There’s something for everybody, and we think people are going to show their pride for Augusta University.”

That excitement was voiced on Day One by none other than the man in charge, who holds degrees from both legacy institutions.

“I’m excited to see both of my universities – my undergraduate and graduate universities – finally, truly becoming one and being unified with the health system under one mark,” Keel said. “It’s really an exciting day for us.”

Learn more about our new brand on Jagwire.