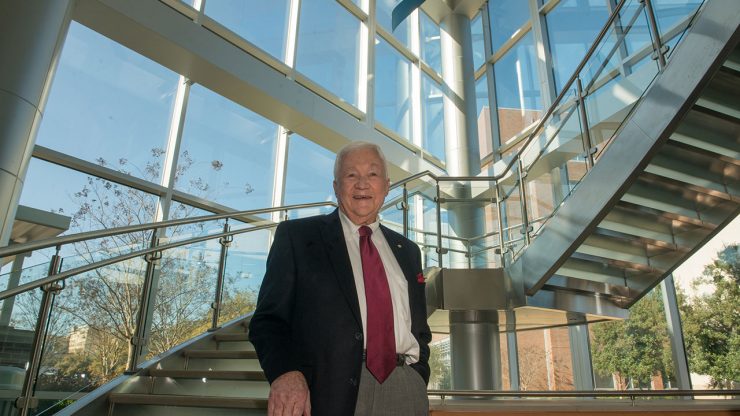 Mentor, philanthropist, community leader, volunteer. These are just a few of the words used to describe M. Bert Storey — a man who gave freely of himself and whose legacy is large and far-reaching.

Up until his death on April 27, 2018, Storey maintained his love for family, for friends and for his community. He was generous with his time, with his resources and with his many talents.

A successful business leader, most recently as the founder of Bert Storey Development Corp., Storey had a sharp intellect and a keen instinct for business development.

Regent James M. Hull, with whom Storey had a long business relationship, held Storey in high regard, stating in an article published in The Augusta Chronicle, “Bert was a great friend and partner and mentor to me and many others in our company. There was never a better or smarter or more ethical colleague than Bert.”

Storey was also highly regarded for his philanthropy, and his generosity did not go unnoticed. He and his son, Barry, received the Outstanding Philanthropist Award from the Greater Augusta Chapter of the Association of Fundraising Professionals, and the Augusta Exchange Club presented Storey with its Book of Golden Deeds Award, recognizing those who have demonstrated exceptional volunteer service in the Augusta community.

In 2016, Dr. Brooks Keel, president of Augusta University, presented Storey with the university’s highest honor, the President’s Award, for his transformational giving to the cancer research building that will bear his name.

Like many, Storey’s family had been touched by cancer, and he was determined to do his part to help eradicate it. He contributed generously to the building that will provide an additional 72,000 square feet of cancer research space — greatly increasing the capacity for groundbreaking cancer research.

The grand opening of the M. Bert Storey Cancer Research Building of the Georgia Cancer Center at Augusta University is scheduled for October 2018.

Wycliffe Gordon, Augusta University’s newest director of jazz studies, was named Best Trombone in the DownBeat Critics Poll 2018, one of the most prestigious recognitions for a jazz musician. This is the fifth time he’s received this award.

Dr. David Bulla, interim chair of the Department of Communication, was named assistant editor of Journalism History, the oldest mass communication scholarly journal in the world.

Four Medical College of Georgia students and two programmers won $25,000 in cash and services to finance their health tech startup during the 2018 Southeast Startup Challenge Summit ­— an initiative funded by a $550,000 grant from the Robert Wood Johnson Foundation.

Augusta University senior Broc Everett carded a final-round 1-under 71 on Monday, May 28, to win the individual 2018 NCAA National Championship at Karsten Creek Golf Club in Stillwater, Oklahoma. Tied at 7 under par, Everett edged out Auburn’s Brandon Mancheno with a birdie in the first playoff hole on No. 18 to win his first collegiate tournament in his last collegiate start.

On March 3, the Augusta University College of Nursing held its 75th Anniversary Diamond Jubilee Gala, the highlight of the college’s yearlong celebration. The gala recognized the college’s history and longstanding service to the community while continuing its legacy by raising funds for student scholarships. Donations include a $1.4 million gift from the Medical College of Georgia Foundation, a $10,000 gift from an anonymous donor and a $30,000 gift.

Answers Along the Way: Lori Foster