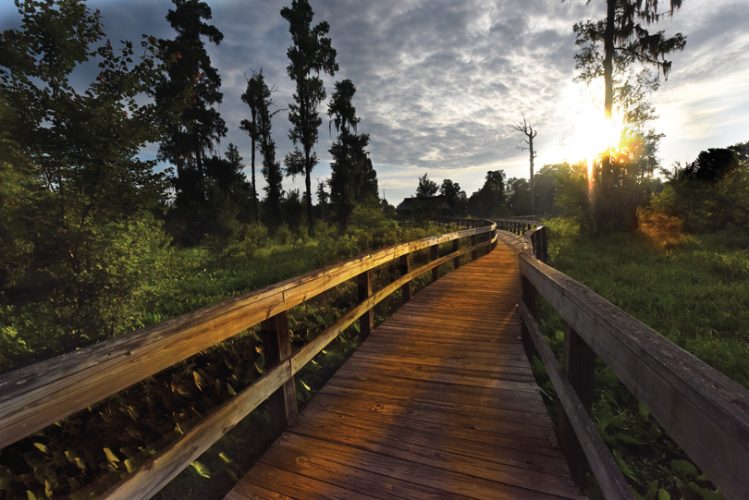 In Place: A Fresh-Water Wonder

A wooden bridge, wet to the touch and dusted with fallen pine needles, is one of only a handful of manmade structures found within Phinizy Swamp Nature Park.

Much of the 1,100-acre park, situated behind the Augusta Regional Airport, looks the way it did 300 years ago. Tall grass covers the smooth banks rising up from Butler Creek, sheltering snakes, waterfowl and the occasional sunbathing gator. Farther in, groves of bald cypress make their home in the soggy earth, their branches sparse and drooping with Spanish moss, their knobby knees churning the soil underfoot. Atop the lone windshear tower, used by the Augusta Regional Airport to measure the direction and average surface speed of wind, an osprey tends to her chicks in a nest built of twigs and dried wood.

Venture far enough in, and you’ll likely encounter another form of “wildlife” roaming the park.

Liam Wolff and Nicole Haibach, students in the College of Science and Mathematics, have both worked extensively at the park as research interns, gathering data for a number of scientific studies including a recent initiative by the Centers for Disease Control to monitor mosquito populations through Richmond County.

“I’ve done so many new and exciting things since I started working at [Phinizy],” Haibach said. “My research has involved collecting fish and macroinvertebrates, processing and analyzing water samples, monitoring chemical concentrations, identifying mosquitoes, and so much more.”

Wolff, who regularly photographs wildlife in the park, said he also has a special relationship with Phinizy because it’s the perfect place for limnological study (the study of the biological, chemical and physical features of a body of fresh water).

“It’s an ideal location for a limnology lab because it’s just outside of Augusta and still only a mile away from the New Savannah Bluff boat ramp, which makes it easy for researchers to get to the river,” Wolff said.