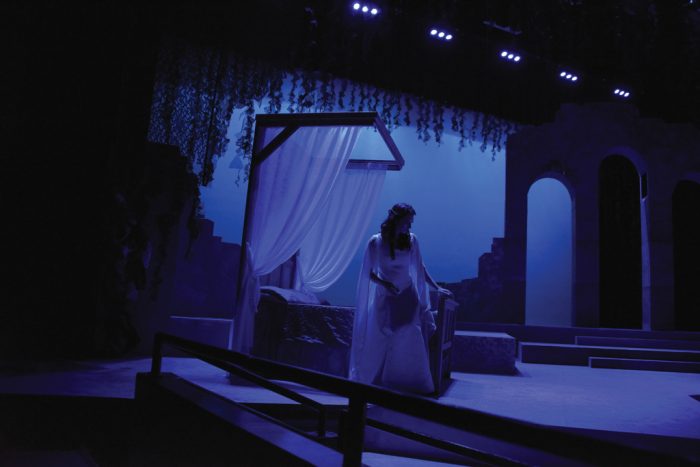 Don’t let it be forgot, That once there was a spot, For one brief shining moment, That was known as Camelot.

A timeless love story set in a magical age, Augusta University’s production of Lerner and Loewe’s Camelot transported audiences to the chivalrous days of the Round Table. But the journey – months in the making and involving dozens of dedicated people – is a story in itself.

rsing with the large cast of students and community members in November, long before the Valentine’s Day weekend performance. Professional soloists arrived to rehearse with the cast a couple of weeks before opening night.

The large Camelot chorus, peppered with Augusta University Opera Ensemble members, appeared prominently in several scenes. Guenevere understudy Sawyer Branham rehearsed with the cast until professional mezzo-soprano Sarah Best arrived to inhabit the role for the stage. Best, along with Rick Kramer as Arthur and conductor Christopher Turbessi, gave students and orchestra members the opportunity to interact with and learn from professional performers.

The production included lavish costumes designed by Diana Gay and an extensive, multilayered set designed by Teddy Moore. Audiences were even treated to a choreographed battle scene, complete with swordplay and a background film directed by Pamplin College professor Matthew Buzzell.

By the end of the production, King Arthur may have seen his love betrayed and his Round Table destroyed, but even after the lights dimmed, the dream of Camelot remained.