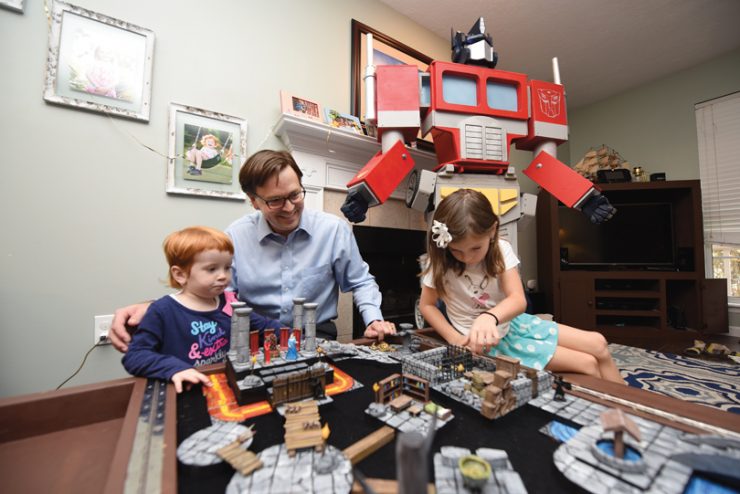 After twice paddling hundreds of miles down the Mississippi River, he has seen firsthand how a “glorified creek” only 20 to 30 feet wide at its source becomes the Mighty Mississippi.

He has also seen his own transformation from high school class clown to the first person in his family to ever go to college. He went from never taking school too seriously to earning a doctorate in English, becoming a college professor and being named the associate dean of the Katherine Reese Pamplin College of Arts, Humanities, and Social Sciences.

What most of his students and colleagues probably don’t know, however, is that Kisting has a secret life: He uses his creativity and passion for challenges to transform ideas into reality.

His latest project is a 6-foot-1-inch Optimus Prime, the face of the Transformers franchise. The robot, which he built for last year’s Halloween, actually turns into a child-sized wagon that Kisting used to pull his daughters (and other kids) around.

How he built it? He’s still not sure.

He never had a fully sketched plan.

“This one was a really pleasant surprise because the engineering was fairly complex, and I did it entirely in my head as I went along,” he said. “When I step back and think about it, it makes no sense to me that somehow the perspective of his upper body and his lower body turned out to be as perfectly proportional as it is.”

All Kisting had to create his Transformer were leftover pieces from other projects, $200 worth of materials and online images of Optimus Prime.

It took him three weeks and more than 80 hours of work.

His daughters loved it.

The Transformer was such a hit at the Halloween trunk or treat at his youngest daughter’s school that every child wanted to ride on it.

“And frankly, every dad, too,” Kisting said. “What I love about this project in particular is that it brings out that kid side in everybody — kids and adults alike.”

He also loves the feeling of transforming an idea into reality.

“I’ve beat away at this every way I can. I’ve been mad. I’ve been frustrated. I’ve hit walls. I’ve failed myself,” he said. “But then I’ve come back, and I’ve wrangled it back into a shape that I feel better about. … When the project finally matches the vision I set out to create, I get tremendous satisfaction and then I’m at peace with it.”

And Kisting knows that his passion for transformation will inevitably lead him to an even more complex project.

“Each time is just a little more ambitious,” he said.

A River’s Gift, Lessons from a Wooden Boat