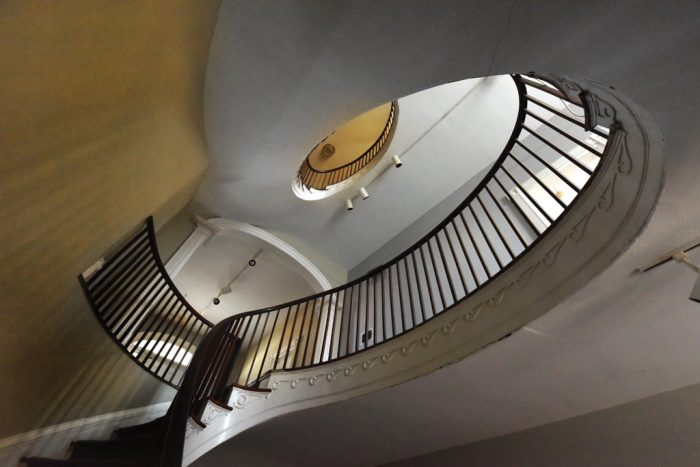 In Place: One Man’s Folly

To be called a “folly,” the mansion on Telfair commands more respect than most Augusta landmarks.

Known today as Ware’s Folly, the home was built in the early 1800s by future Augusta mayor and U.S. Sen. Nicholas Ware for the exorbitant sum of $40,000. While its floating spiral staircase and gorgeous three-story columns draw the eyes of antiquarians and window shoppers alike, it’s the home’s price tag that had people thinking it was a mistake. At roughly $750,000 by today’s standards, it is one of the most expensive houses ever built within Augusta’s city limits.

Throughout the course of its life, Ware’s Folly would pass first from the Wares to the Sibleys (of Sibley Mill fame), and later still to James Gardner, former owner of the Constitutionalist – a now-defunct Augusta newspaper. But while the home’s price tag and strictly Southern roots earned it a place of reverence in Augusta’s history, Ware’s Folly owes much of its current fame to a New Yorker.

In 1937, Olivia Herbert purchased Ware’s Folly and donated it to the Augusta Art Club as a living memorial to her late daughter, Gertrude Herbert Dunn. To honor Herbert’s contribution, the club promptly changed its name to the Gertrude Herbert Institute of Art (GHIA), and the rest, as they say, is history.

Since 1937, the Gertrude Herbert Institute of Art has trained countless artists, designers and visionaries. In addition to its public outreach, the school also maintains a very close relationship with Augusta University’s Art Department. Several faculty members have either taught or currently teach at the institute, and more participate in the school’s Augusta University Department of Art Faculty Exhibition, held biennially.

The GHIA also holds a special place in the hearts of Augusta’s alums; the school’s current executive staff are all Art Department graduates.

While it’s tough to separate the university’s legacy from that of the institute, it’s safe to say one thing at least: Although the mansion at 506 Telfair may have been Nicholas Ware’s biggest mistake, it has since become one of Augusta’s greatest treasures.