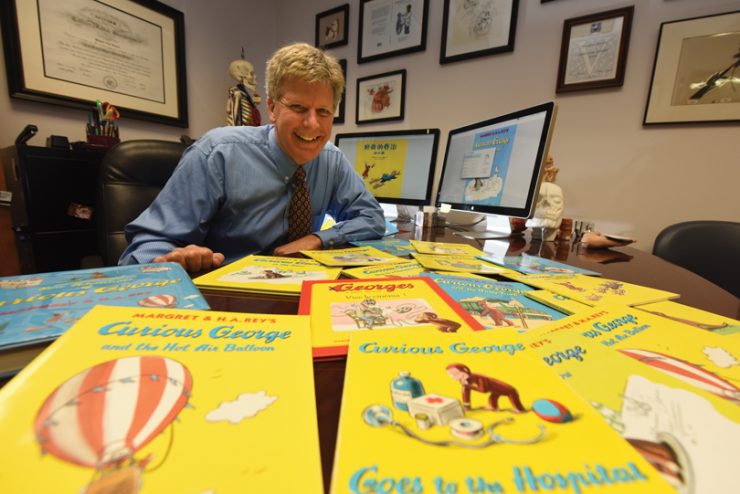 Chances are, you grew up reading the stories of a juvenile monkey who got into big trouble and had to be bailed out by a man who wore a yellow hat. For Michael Jensen, an associate professor in the Medical Illustration Graduate program in the College of Allied Health Sciences at Augusta University, his love for the Curious George stories got personal when he started illustrating a new batch of the little monkey’s adventures in the late 1990s.

In 1996, Houghton Mifflin, the company that owned the rights to Curious George, wanted to produce a series of children’s software programs featuring George. According to Jensen, the software sales were so successful that executives decided the time was right to produce a new series of Curious George books. However, by then H.A. Rey had died, and his wife, Margret, was in poor health. So the company issued a challenge to companies in Boston to see who could produce art that looked exactly like the original books.

Jensen’s company prevailed, and Houghton Mifflin commissioned Jensen and the four other members of his team to produce four new stories featuring George.

“One of the things that I think helped us get the job was that each of us loved the original Curious George books,” Jensen said. “We had this collaborative feeling of protecting George’s innocence and telling stories that showed him doing the right thing, even if he made mistakes along the way.”

Jensen served as the main draftsman for the books. He would create storyboards and draw the final line art for the books. Once approved, it went to an artist who used charcoal to create the same look H.A. Rey had used all those years ago. After that, the watercolor team put the finishing touches on the books.

Houghton Mifflin used the Home Shopping Network to generate more than $1 million in sales of the new books. And the company built a Curious George store in Boston’s Harvard Square, which boasts over 8 million visitors each year.

In all, Jensen illustrated 12 Curious George titles. But in 2003, at age 39, he packed up his family and moved to Augusta to get his Master of Science in Medical Illustration degree at what was then the Medical College of Georgia. Today, he uses the skills he learned working on Curious George stories to create medical art that uses humor to teach the lay public as well as the medically educated.

“It is frequently a very welcome change to standard medical art,” he said.