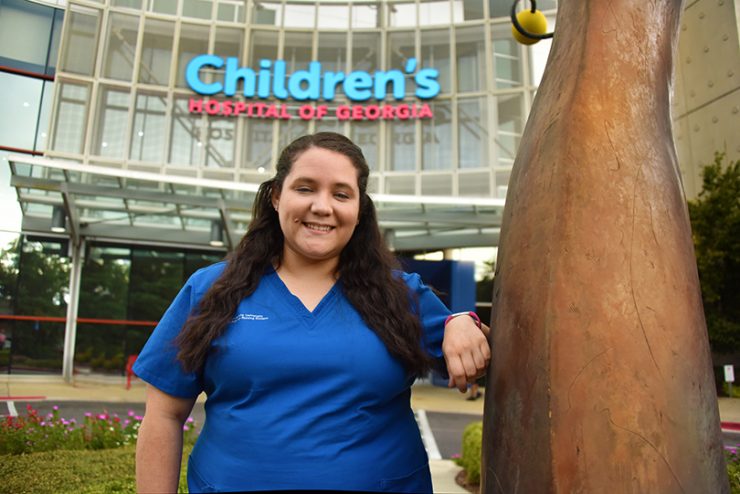 Value Added: Why Don’t We Create Some More Nurses?

When Samantha Kitchens learned she had received the $20,000 Shirley M. Schiffer Pediatric Nursing Scholarship, she couldn’t believe it. The amount seemed unreal.

But it was true. The $20,000 scholarship, available to third-year students entering the Bachelor of Science in Nursing program who want to pursue a career in pediatric nursing, is funded by an endowment established by the family of the late Shirley M. Schiffer (BSN ’77), who was herself a pediatric nurse.

“She was very proud of what she had accomplished and how she served people,” says Edwin Schiffer, her husband of 52 years. “I guess that was the key — treating people as individuals and not a number or a problem.”

Shirley Schiffer graduated from Mount Sinai nursing school in 1964, which was then part of Mount Sinai Hospital in New York City. She was working as a registered nurse when the family moved to Macon, Georgia, and she began pursuing her bachelor’s in nursing at Augusta.

A clinical nurse providing ongoing care for indigent children with serious long-term illnesses, she continued caring for children as a volunteer well into retirement.

Her commitment to giving was so strong that her family wanted to make sure it continued after her death.

“Her two strong passions were nursing, specifically pediatric nursing, and education,” Edwin Schiffer says. “So I sat down with my sons and said, ‘What can we do to honor Mom in a way that she would appreciate if she knew?’ And my son is the one who said, ‘Well, why don’t we create some more nurses?’”

For Kitchens, who is the first to receive the scholarship, it couldn’t be more welcome, since she already has student loan debt from the biology degree she earned at Georgia Southern University.

“Not having to take on more debt helped me and my family tremendously,” she says. “I’m so grateful.”

Like Schiffer, Kitchens has a love of children — and of nursing.

“I started out wanting to be a doctor, but I realized as a nurse you get to interact with patients more,” she says. “And then I realized I really liked working with babies, especially in the neonatal intensive care unit, because you’re sometimes their biggest advocate since they may not always be able to have their parents next to them.”

“We were helping take care of a certain baby, and I was like — you know, I’m really glad this is where I am. Being with that baby and those nurses, I just felt that this was what I wanted to do.”

And now, thanks to the scholarship in Shirley Schiffer’s honor, she doesn’t just know what she wants to do, she knows she can actually do it.

Kitchens graduates in May.

For more information about how you can make a difference, visit augusta.edu/giving/makeagift.