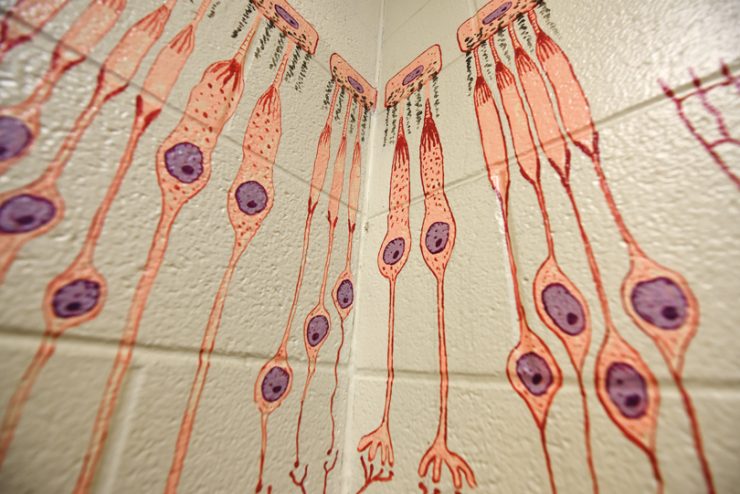 Eye on Campus: For Public Consumption

The city of Augusta did some serious soul searching in 2017. One of the biggest questions pertained to identity. Artistic identity, that is. More specifically, Augusta officials and community members wanted to know: If Augusta had to be defined by a piece of public art, what would it be?

Answers varied, as one might expect. Asked then, we might have suggested the gorgeous mural sketched and painted by the Medical College of Georgia’s Medical Illustration program’s Class of ’79. Located in the Hamilton Wing of the Carl T. Sanders Research and Education Building — right in the heart of the university’s Health Sciences Campus — it contains all the elements that make Augusta one of U.S. News & World Report’s 100 best places to live in the country.

The university’s Department of Art and Design, housed in Katherine Reese Pamplin College of Arts, Humanities, and Social Sciences, is making waves in the community. Recently, five of the department’s students signed on to create public art installations for Hammond’s Ferry.

Scott Thorp, department chair, said the installations were the first steps toward getting student art out into the community.

“The public art commissioned for Hammond’s Ferry is just the start of a long relationship between that community and Augusta University’s Department of Art and Design,” he said. “The designs were meant to encourage civic engagement and serve as learning tools for sustainability and history.”

Moving forward, Thorp said he hopes to bring even more student art to Hammond’s Ferry and, quite possibly, beyond. Community partners like Turner Simkins, president of the Hammond’s Ferry Foundation, are helping to turn those hopes into reality.

“Turner Simkins is a great advocate for the arts and we’re lucky to have him in this area,” Thorp said. “With his backing, we plan for this to be an ongoing collaboration where we contribute new designs on a yearly basis.”

The installations will be going up in the coming months, but in the meantime, there’s plenty of time left to check out the art on campus. After all, like all the best works of public art, the medical illustration mural isn’t going anywhere anytime soon.