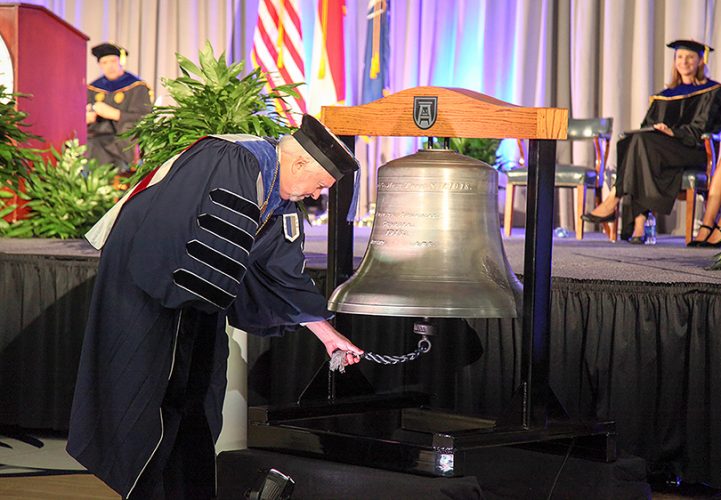 When Assistant Vice President for Campus Services Dale Hartenburg asked Facilities Director James Grigg if he had a bell — the kind of big, ceremonial bell around which a new graduation tradition might be built — what seemed like a shot in the dark ended up hitting the bullseye. A couple of months before, Grigg had been rummaging around a storeroom in the Annex II building near the Health Sciences Campus when he ran across just that kind of bell.

“It wasn’t rusty, but it had kind of a dark, browny green patina and a lot of dust and some paint on it,” Grigg says.

Grigg took some photos and sent them to Hartenburg, and once they got the bell lifted up with a crane and discovered it would actually ring, they got the go-ahead for a May graduation rollout.

But the work had just begun.

First, several members of the Facilities Department and an outside engineering firm fabricated a frame that was stable enough to hold the 600-pound bell and flexible enough to move it from venue to venue.

Then, they had to clean it — a progressive, time-consuming process culminating in a special, sawdust-and-secret-ingredient paste that finally did the trick.

And that’s not even considering the clapper (temporarily half of a dumbbell, but soon a special, student-designed bronze clapper) and the cord to pull it — an honors cord worn by students in the commencement ceremony.

With history traced back to the Augusta Arsenal and an inlaid depiction of the Arsenal Oak carved from wood from the Arsenal Oak itself, the bell was rolled out in August for its first Freshman Convocation, where it was rung to signify the beginning of an academic journey that will end with the ringing of the same bell at Commencement.

“To be part of creating this symbolism for the institution is fabulous,” Grigg says. “It’s not just a new bell; it’s a bell with a bigger history.”

Answers Along the Way: Doug Duncan