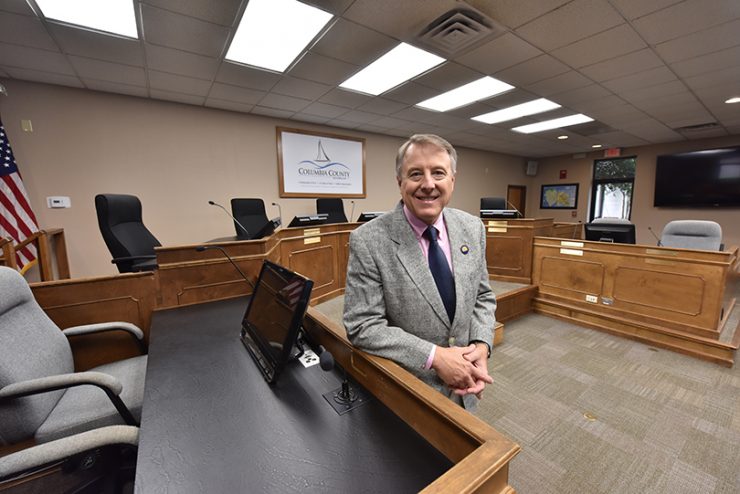 Answers Along the Way: Doug Duncan

It’s a good thing Doug Duncan (BBA ’85) believes in regionalism, because the current chairman of the Columbia County (Georgia) Board of Commissioners has an impressive Richmond County pedigree. Born at the former St. Joseph’s Hospital in 1962, he graduated from West Side High School a quarter early; his grandmother taught kindergarten on the Hill; and his grandfather’s best friend was Ty Cobb Jr. (“I have a picture of the Summerville Little League baseball team with Ty Cobb Sr. as their coach,” he says). But after earning his business degree from Augusta University, then Augusta College, he and his wife moved to Columbia County in 1990, though he’s remained active in many Augusta-area civic activities, including serving on the Augusta College Foundation board, the Medical Center Board and as president of the Augusta College Alumni Association.

Vice president for recruiting and staffing at MAU Workforce Solutions since 2005, Duncan was appointed to the Governor’s Office of Workforce Development by former Gov. Nathan Deal and served one term as a commissioner in Columbia County before being elected chair in 2018.

“I feel very fortunate to have been born in Augusta and educated here,” he says. “I got a good education — smaller classes gave me an opportunity to have more one-on-one interaction with the professors.”

> You’ve got to be able to look past the criticism, because somebody’s always going to be criticizing.

> I graduated high school a quarter early, so I started college in the spring, got in with a good group of people and just never left.

> I think there’s a general distrust for government, a lot of which has probably been earned 10 times over. But you have to overcommunicate with folks and help them see the side that works, because a lot of it works and works well.

> I tell people, “I’m not here to give you the answer you want, but I’m going to make sure you have access to the people and information you need to get you an answer.”

> I’m elected to represent the folks in Columbia County who voted for me and those who didn’t, but I also know that what helps Richmond County helps Columbia County. It’s a symbiotic relationship that you can’t ignore.

> If you try to keep everybody happy you will lose your mind. You’ve got to have something that anchors you, because if you don’t, you’re going to be blown this way and that way.