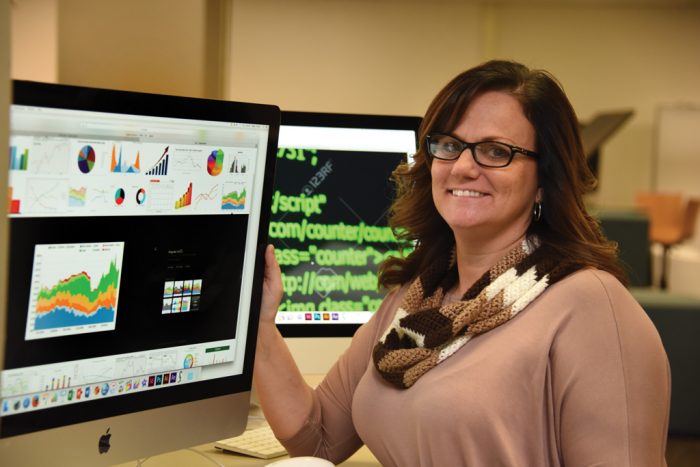 Value Added: Back to the Future

When Shelly Redd’s employer announced an impending acquisition that could result in the loss of her job, she didn’t despair.

“I was in the position where one career was ending, and I would have to start another career,” said the longtime manager of a local bank.

She had already begun taking classes at Augusta University simply to remain relevant in her field. Now, 13 years after receiving her associate degree in applied technology from Augusta Tech, she began meeting with career counselors and advisors at the university to explore more options.

It soon became clear to her that cybersecurity is a field with exciting job opportunities and that a bachelor’s degree in applied information systems and technology from the James M. Hull College of Business would be her best path forward.

How could the mother of three earn a bachelor’s degree without winding up in significant debt?

Enter ADP, a global technology leader that serves 620,000 businesses around the world and has been recognized as one of Fortune magazine’s “World’s Most Admired Companies.”

When the company opened offices in Augusta, they quickly decided to invest in the local job market by offering scholarships to students pursuing careers in the science, technology, engineering and mathematics (STEM) fields.

“When I attended school before, the HOPE scholarship fully covered it,” said Redd. But changes to the Georgia scholarship program in the intervening years meant more costs to her.

She learned about the ADP scholarship program at Augusta University and applied. It wasn’t long before she received notification of the scholarship award.

“It was definitely a relief to get the ADP scholarship,” she said. “It means I can graduate and start my new career without being in significant debt.”

Redd said, aside from the obvious financial benefit the scholarship offers, being an ADP scholar gives her valuable opportunities to network.

“Augusta University puts on luncheons and invites scholarship recipients and people from ADP and other local tech companies,” she said. “So I’ve been able to network with peers and leaders in the local technology job market.”

She also plans to explore the many internship opportunities available
through Hull.

Since partnering with Augusta University in 2009, more than $347,000 in ADP scholarships has been awarded to 107 students. Additionally, ADP has given more than $129,000 to support a wide variety of STEM Tutorial Labs. This academic year alone, 23 scholarships were awarded to students in the College of Science and Mathematics and two, including Redd, in the Hull College of Business.

ADP scholars have gone on to become teachers, medical doctors, veterinarians, software developers, chemists, geophysicists and more. The program also provides critical support in math, biology, chemistry, computer science and physics, which all students can access in tutorial centers at the university.

In the meantime, Redd appreciates the opportunity to achieve her longtime goal of earning a bachelor’s degree and looks forward to an exciting next chapter in her career in cybersecurity.

In the Field: A Bountiful Harvest