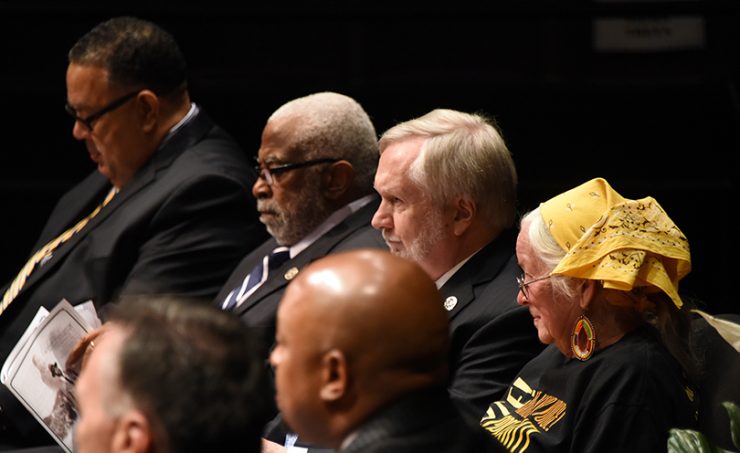 Mulholland, who was the first white student to integrate Tougaloo College in Mississippi, had a few words for the late doctor. “We know it wasn’t just you, all by yourself, but you were the inspiration, the voice and the spokesperson for all of us, for all of us thousands of folks who were following you and working for change,” Mulholland said.

And when Mulholland says “us,” she truly means “us.” Her involvement with the fight for civil rights as a Freedom Rider brought her face-to-face with the Ku Klux Klan. It also earned her a cell on death row at the Mississippi State Penitentiary. Those struggles, she said, only helped to strengthen her resolve, as similar acts strengthened the resolve of other civil rights activists across the country.

One act was the March on Washington, an event Mulholland remembered fondly. “Now, at that March on Washington Speech, he was dreaming,” she said. “That wasn’t even part of the speech. King gave his speech, and then he just went off, pie in the sky dreaming. Us students, we thought, ‘Man, get your feet back on the ground and do something!’”

Looking back, Mulholland said she could now appreciate what King’s speech accomplished. “Today, I can see that that dream was really a beautiful expression of the world we wanted to see and we’re not there yet,” she said. “We’ve still got a long, weary road. But you know, you just do one little thing, and you don’t know where it’ll lead.”

She cited the lunch counter sit-ins and the expression of the Freedom Rides, claiming both had an immeasurable impact on American civil rights. “Four guys sat at a lunch counter in Greensboro,” she said. “Within weeks, thousands of people were demonstrating across the country. Virtually every southern town with a college had students sitting at those lunch counters. Mississippi was a little behind the times; they didn’t get to it until 1963, but I was there.”

Dr. Brooks Keel, president of Augusta University, said it was a tremendous honor to host the Martin Luther King Jr. Birthday Celebration on the university’s historic Summerville Campus and that it was fitting for such a celebration to be hosted by higher education institutions. “Let us pledge to continue his legacy of leadership, to both be today’s leaders but also to strive to educate and inspire tomorrow’s leaders,” he said. “To have the courage, the vision and the passion to make the world a place where Dr. King’s enduring dream holds true for all.”

According to Dr. Mark Thompson, interim dean, the name change more effectively describes the curriculum and content of the program. “This change will be more easily recognized by prospective students as well as employers hiring our graduates,” he said. “Additionally, students will experience an increase in internships and full-time opportunities as a result of this name change.”

The program, which provides students with a broad foundation of technical skills and understanding, is closely tied with the university’s cyber initiative.

In December, first- and second-year medical students participated in the Employee Advisory Council fundraiser. However, they took their involvement one step further and also raised money for a toy drive to benefit the Children’s Hospital of Georgia. The Employee Advisory Council fundraiser allowed Augusta University employees to purchase a Roary stuffed animal, the CHOG mascot, for $10. The stuffed animal was then placed in a gift bag and donated to CHOG patients.

In addition to their involvement with this fundraiser, the Medical College of Georgia classes of 2018 and 2019 furthered their participation by purchasing toys for the children. “We felt we could get involved by purchasing the Roarys as well as raising money to donate toys,” said Chrissy Callaway, Class of 2019 vice president. “Our classmates and colleagues really enjoy the different ways we approach fundraising.”

Together, the students were able to raise more than $1,500. They purchased 72 Roary stuffed animals through the Employee Advisory Council fundraiser. All remaining funds were used to buy toys to donate to CHOG. “We feel that it is very important to give back to the community that supports us, and putting a smile on a CHOG patient’s face allows us to do that,” Callaway said. “It is so rewarding to bring joy into a situation that can be very scary for both the children and their families.”

Callaway, along with the community vice presidents of the classes of 2018 and 2019, delivered their toys to Stephanie Grayson, CHOG child life specialist, on Dec. 14.

The new site is divided into two sections, one for providers and one for potential patients, to accomplish two important goals. “We had two goals,” said Blake, assistant professor in the Robert B. Greenblatt, MD Library. “To assist and educate faculty and volunteers working with the LGBT population in the Equality Clinic and to provide a site where LGBT individuals could look for a collection of health resources specifically for their needs.”

The Equality Clinic is a free, student-run clinic dedicated to abolishing barriers to health care. Through serving the health needs of the underinsured in the LGBT community and educating current and future providers in the practice of providing informed, compassionate care, the Equality Clinic hopes to address some of the current health disparities faced by the LGBT community.

“The provider site has specific sections for medical and mental health issues and current standards of care and treatment guidelines,” she said. “For example, the Equality Clinic treats a large number of transgender individuals, and there are international guidelines for care that are frequently updated with regard to best practices for hormone and surgical intervention as well as mental health care and assessment.”

Augusta University hosted the 2016 Leadership Academy Summit on Jan. 23. Hosted as part of the NCAA Division II Military Pilot Program, the academy summit was intended to provide up-and-coming community leaders with a chance to learn from and engage with current leaders in both the field of education and military sciences.

“We must challenge ourselves every day to be the best leaders and those that we serve to be the very best that they can to achieve levels of peak performance,” Bryant said. “We at Augusta University, in partnership with the NCAA, Ft. Gordon and the Peach Belt Conference, are committed to providing this level of commitment to our best and brightest.”

O’Keefe grew up in Little Rock, Arkansas and entered his third season with the Jaguars after being named head men’s golf coach at Augusta University on Dec. 2 during an 11 a.m. news conference at the J. Fleming Norvell Golf House. O’Keefe became the sixth full-time head coach in the program’s storied history. As a collegian at the University of Arkansas, O’Keefe was a four-time All-American, a two-time All-SEC selection and an All-Southwest Conference performer from 1989-93. He registered three individual victories as his Razorback squads captured 10 team tournament titles over his last two seasons.

A 2010 graduate of the University of Arkansas with a BS in Education, O’Keefe is married to Susan Fruits of Russellville, Kentucky.

Students and faculty from The Dental College of Georgia and College of Allied Health Sciences at Augusta University provided free dental care for nearly 125 local children at the university’s annual “Give Kids A Smile” event on Feb. 5. Part of a national initiative to offer free oral health screenings and treatments to underserved children, the American Dental Association launched the “Give Kids A Smile” program in 2003. Since then, the program has provided more than 5 million children with free oral health care.

More than 100 students and a dozen faculty members and residents volunteered to provide cleanings, sealants and restorative dental work to children screened from Rollins Elementary School, Heritage Academy, New Holland Mennonite School and the university’s Healthy Grandparents Program, among others.