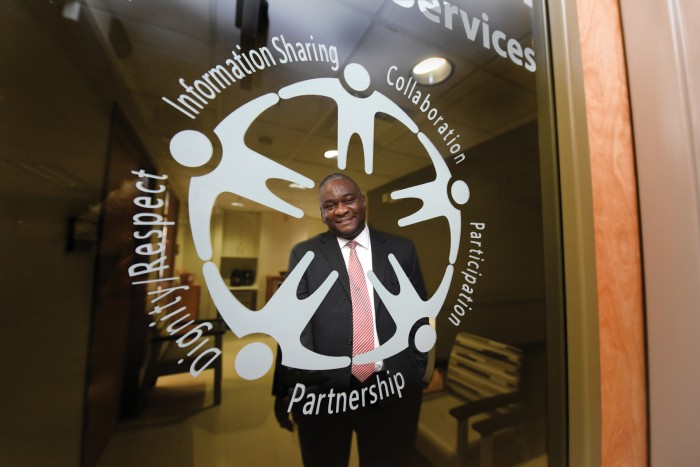 Stronger for the Struggle

Bernard Roberson’s future was just unfolding as a health crisis threatened to stop him in his tracks.

Up through early adulthood, the native of Metter, Georgia, had managed to reconcile oversized ambitions with underwhelming financial resources. He started working in a drugstore as a boy to save money for college, a single-minded pursuit to compensate for his family’s modest means.

And his hard-earned savings filled the bill . . . at least temporarily. He enrolled at Mercer University in Macon, Georgia, but had to regroup when his money ran out after his sophomore year. No matter. The ever-resilient and preternaturally optimistic young man dusted himself off and forged a new game plan. He enrolled in the U.S. Air Force.

But soon thereafter, he began to experience increasingly debilitating stomach problems. Doctors suspected colon cancer, and a surgery on his 23rd birthday followed. The cancer scare was ruled out, but gastrointestinal abnormalities would require lifelong treatment from that point on. He retired from the military at age 23. “The last thing you want to deal with in your early 20s is a medical issue,” says Roberson. 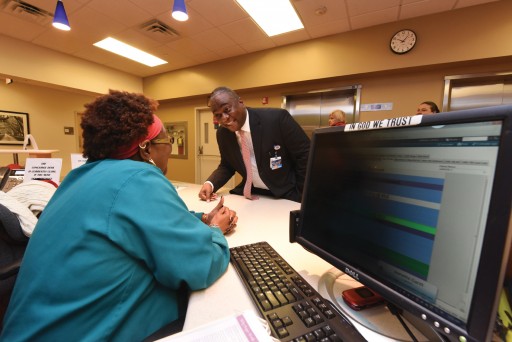 Frustrated but unbowed, he segued seamlessly to game plan number three. He enrolled in Augusta University (then Augusta College), where he fondly recalls a nurturing, supportive environment at every turn. In the Admissions Department, Registrar’s Office, classrooms and everywhere in between, virtually everyone he encountered seemed determined to help him succeed. “These were folks who really helped push me through,” Roberson says, citing many who remain friends to this day. “[Augusta University] was very rewarding for me, and particularly importantly in my case, it was affordable. I’d spent two years at Mercer, so I had something to compare it to. The education was just as grand as the one I got from a private university.”

By the time he earned his bachelor’s degree in 1995, he was chomping at the bit to jumpstart his twice-delayed career. He knew he wanted to work with the public, particularly vulnerable citizens, demonstrating the compassion borne of his own life experiences. He worked for the Aiken Housing Authority in South Carolina helping families reintegrate into the workforce, then served as director for community development for United Way of Aiken County, helping public-housing residents establish a firm foundation. “It was all about teaching people skills and life skills,” Roberson says. “That was very rewarding.” 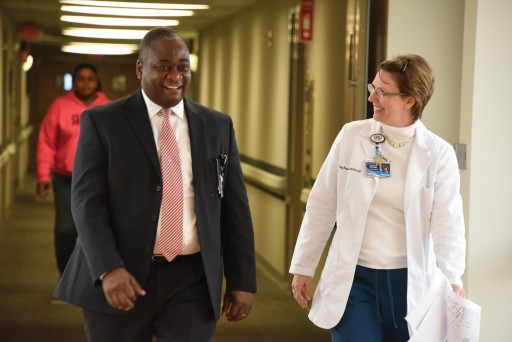 That’s where he reconnected with longtime friend Dr. Robyn Hatley, professor of surgery at Augusta University’s Medical College of Georgia. “I was teaching classes for United Way, and Dr. Hatley recommended me as a social worker,” he says.

Roberson was clicking off goals in other areas of his life as well: He and wife Sevi were raising a son and daughter, and Roberson was earning a master’s degree in management with a concentration in hospital administration from Troy University.

But once again, health problems threatened to derail his future. “In 1999, I had my first bout with my heart and ended up needing a heart cath,” he says. The procedure – the insertion of a tube into a large blood vessel leading to the heart, enabling physicians to visualize its function – led to a diagnosis of calcification in the lining of the heart valves. “The symptoms almost exactly mimic a heart attack,” he says.

Pretty daunting – except this time, Roberson was fortified not only with his own sunny optimism, but with his wife’s “refusal to be a young widow,” he says with a laugh.

“I put my foot down and told him he had to take care of himself,” says Sevi. “It’s difficult for him to do that because he’s all about giving. But we want to keep him around.”

Today, Roberson’s condition is closely monitored, and blood pressure medication, ready access to nitroglycerin tablets and other modifications have enabled him to push forward without missing a beat.

He laughs that his gastrointestinal issues had somewhat of an upside at this point in his life: He had a head start on the work involved in optimizing one’s own health. “I was already well-accustomed to making dietary changes,” he says. He would prefer, of course, to have incorporated exercise and healthy eating into his routine on his own terms, but he’s sanguine about the cards he was dealt. He is also heartened that his firsthand challenges further illuminated his understanding of the patient experience – an understanding that made the next stage of his career a natural fit.

In 2006, Roberson was named director of family services development for Augusta University’s health system, then appointed to his current role of administrative director of patient- and family-centered care. “Everything I’ve been through prepared me for what I do: helping integrate patients and families into the health care system, and helping the health system understand patients and families. It’s been a great journey.” 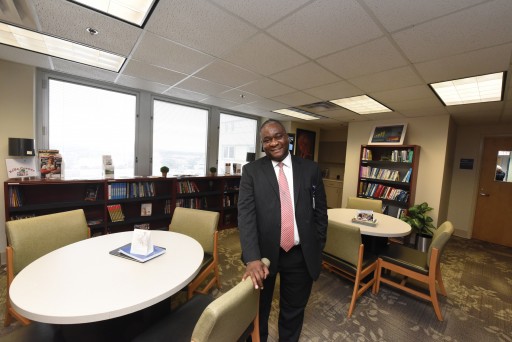 Building on Augusta University’s industry-wide reputation as a pioneer in the field, he counsels patients and families as well, urging them to be well-informed and highly engaged champions of their own health. “If a medicine is making you light-headed and unable to focus, for instance, you need to speak up and say, ‘This isn’t the medicine for me,’” Roberson says. “Patients need to assert their needs, ask questions and convey vital information. And their health care providers need to listen. There’s a learning curve on both ends.”

He also inured his staff to an environment very similar to the one he creates for patients and families. “My staff members aren’t my employees, they’re my colleagues,” he says. “What we accomplish, we accomplish together.”

As fulfilling as his team’s impact is on health care, Roberson is even more heartened by the impact he and his wife have had on their children. Son Aaron, 23, is a senior at Kennesaw State University, and daughter Maya, 20, attends Georgia Southern University. Both excel academically, and both “really have a servant mindset, which is exactly what we wanted for them,” Roberson said. “They’re always willing to help others regardless of personal sacrifices, and they find that in helping others, they’re helping themselves.”

Roberson counsels to his children the same values he counsels to those in his professional life, including respect, compassion, dedication and teamwork. He encourages them to “get into the trenches” and make a difference in the world. They seem to have internalized the message well. 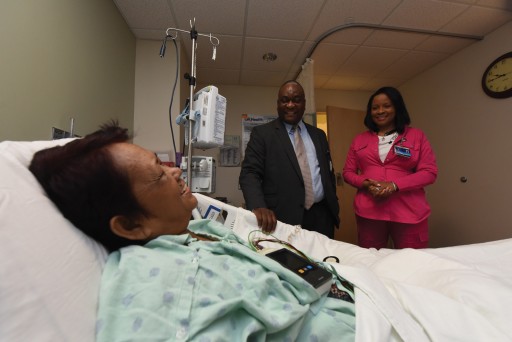 Aaron, for instance, has been on the Kennesaw State University’s Student Government Association all four years of college, a tenure culminating in this year’s role as president. He prides himself as a strong advocate for his classmates and a resonant voice regarding important issues, even (maybe especially) controversial ones.

He also utilizes social media and other resources extensively to help ensure that his classmates are well-informed voters come Election Day in November. He urges them to become involved in campus politics as well, for instance by arranging an annual Meet the President event. He applauds the event’s role in helping students “have meaningful conversations with administrators and their peers to allow them to have a better understanding of things important to them here on campus.”

Daughter Maya takes a different but equally impactful approach to service. For example, rather than hitting the beach during spring break this year, she completed mission work in the Dominican Republic.

“Our son goes, goes, goes all the time, just like his dad,” says Roberson’s wife, who also exemplifies a strong work ethic as director of management for the Augusta Housing Authority. “And our daughter has a very giving heart. We’re so proud of who they’ve turned out to be.”

[su_pullquote align=”right”]He knew he wanted to work with the public, particularly vulnerable citizens, demonstrating the compassion borne of his own life experiences.[/su_pullquote]

Their children return that pride unabashedly. Roberson notes that they still love hanging out with their parents, laughing that they keep commandeering their parents’ 25th-anniversary plans. “I’d planned to take Sevi to Hawaii, but the kids wanted to go, so we did that two years early,” Roberson says. “So we thought about a cruise, and the kids said they want to come along for that, too. But to have grown children who want to be with their parents? You can’t ask for more than that.”

As for Roberson’s ongoing health issues, he insists that nothing is holding him back. “I’m doing great; I can’t complain one bit,” he says. “And I’m very proud of the work we’re doing. What I’m doing with my life is bigger than any problem I could have.”