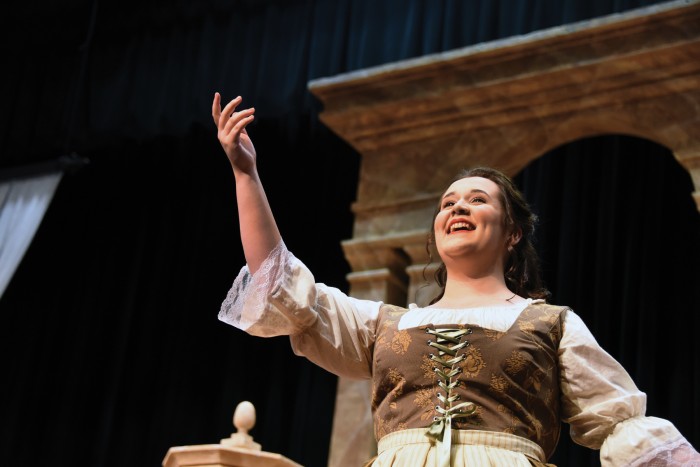 Since its 1786 debut performance in Vienna, Austria, Mozart’s The Marriage of Figaro has been performed countless times around the world. It’s a big production. A full three hours in length, it’s an energetic recounting of servants Figaro and Susanna’s wedding day, humorously complicated by the licentious interest of Figaro’s aristocratic employer in the bride-to-be.

The story is witty and entertaining, but as is true with all opera, music is its driving force. Enthralled audiences had the opportunity to experience that force during three performances of The Marriage of Figaro presented by the American Opera and Musical Theater Institute at Augusta University over the recent Valentine’s
Day weekend.

Sawyer Branham, an Augusta native pursuing a bachelor’s degree in music and vocal performance at Augusta University, played Susanna. “It’s a really big role, really demanding,” she said. “Susanna is on stage the whole time, and singing in Italian is a challenge in itself.”

Branham expressed great appreciation for the support she received from many people connected to the school and production. But two names kept coming up: Tonya Currier and Gene Fleischer. Currier, a part-time voice faculty member and the administrative director of the American Opera Institute, is the reason Branham wanted to return to Augusta after briefly studying music elsewhere.

And Fleischer and his late wife, Lucille, with their generous and longtime patronage of opera in Augusta, are the reason she was able to. Currier, an accomplished and award-winning operatic soprano, has long been part of an active and generous group of local opera enthusiasts working to bring top-quality performances and vocalists to Augusta.

Chief among that group have been the Fleischers, who arrived here in the ’70s and immediately immersed themselves in the local music community. Growing up poor in New York City, Lucille’s love for opera began during free performances of the Metropolitan Opera at the local library. Gene is an accomplished musician who plays several instruments. Their 1942 marriage, which lasted 71 years until Lucille’s death in 2013, was born amid a mutual appreciation for music, which Gene continues to this day.

After the Augusta Opera shut its doors in 2013, Gene was a founding benefactor of the American Opera and Musical Theater Institute housed within the university’s Music Department. “The care and nurturing of young singers is really important to him,” said Currier. “It’s not just that he brings opera to the community, but he’s enabling students to have these experiences.”

Gene underwrote the production of The Marriage of Figaro – the first opera performed in Augusta in four years. Its mix of professional and student performers provided students tremendous opportunities to learn from the pros and grow in their craft.

Branham especially appreciates the personal interest Gene takes in her and other students’ work. “That someone of his stature in the community is taking time out of his schedule to see us perform … that just means so much,” she said.

History & Heritage: Lifelong Fight to ‘Give the Girls A Chance’