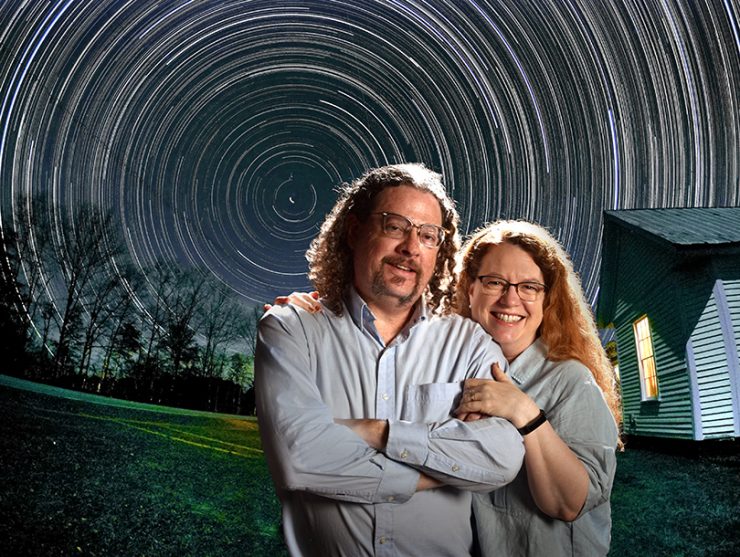 Part of that mystery might be due to the fact that they live in distant Raytown, about 15 minutes outside of Washington, Georgia.

Envision the back of beyond … and then keep going.

“It was the first town incorporated in Taliaferro County, but it doesn’t exist anymore,” Yanasak says. “Even in the most rural county in the state, we’re in the outskirts.”

Though the practical reason they landed there — and they’ve been there for a while — was that it was roughly equidistant between Athens, Georgia, where Yanasak was working three days a week, and Augusta, where Turner was teaching full time, it also fit nicely with their shared love of the night sky.

They met in Los Angeles when Turner was a grad student at UCLA and Yanasak was at Cal Tech and NASA’s Jet Propulsion Laboratory. And while growing up some 12 minutes from the Johnson Space Center in Texas — in the same neighborhood as legendary NASA flight director Gene Kranz (“His wife used to be my substitute teacher,” Yanasak says) — made a love of space somewhat inevitable for Yanasak, Turner also grew up loving the stars. In fact, for a while, she wanted to be an astronaut.

“Our first date — our entire conversation for hours — was about whether or not dark matter existed,” Turner says. “In fact, they closed the restaurant — put up all the chairs around us — and we didn’t even notice.”

After a year living off of Washington Road, they moved out to Raytown just before the annual Leonid meteor shower in the late fall. They watched their first big astronomical event at their new home from the bed of his pickup, bundled up in blankets and sleeping bags.

Several years later, they were sitting at the edge of a neighbor’s pasture watching one of the comets discovered by the Pan-STARRS telescope when some curious cows startled them by wandering up to the fence to see what they were up to.

“That was a typical Wendy and Nathan experience,” he says.

Every other year, Yanasak teaches an astronomy class for non-majors, and they invite the class out to their home to experience the deep, special darkness and watch the night sky.

“People have a very visceral reaction to this stuff,” Yanasak says. “I think giving students just a tiny taste of it is really important. Maybe they’ll remember that couple of hours of looking at the stars and just sort of think about it.”

The Value of Venice