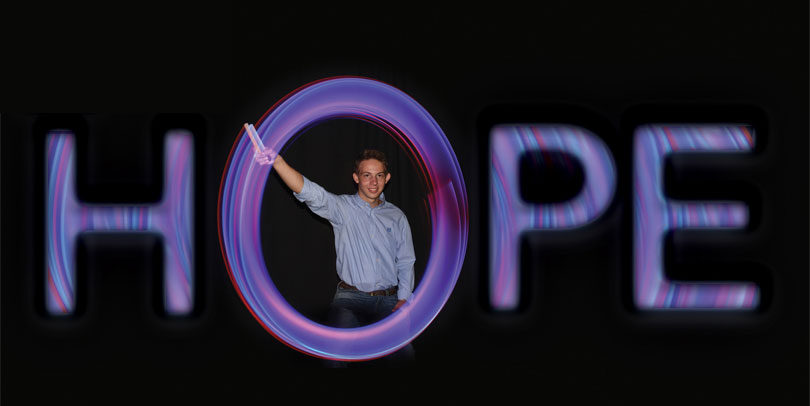 A Hope and a Future

A glow stick doesn’t glow to its full potential until it’s broken. Lives can be like that, too.

When Macallin Thomas speaks to church congregations, he ends his story with a metaphor about glow sticks. Each attendee is given a glow stick and instructed not to break the stick until Thomas gives the word.

“A glow stick is just a glow stick until it’s broken, and then it glows to its full potential,” Thomas says.

He explains to the crowd that sometimes God needs to break a person in order for him or her to grow into their full potential and be the person they are meant to be. At 18, Thomas understands this more than most.

On June 10, 2017, Thomas climbed into a car with his best friend Austin and Austin’s mother. The trio were heading to the Swainsboro Raceway. As they made their way to the track, they came across Austin’s father and stepmother, who had broken down on the side of the road. They pulled over to help, and after getting the truck running again, they pulled back on the road. About a mile later, the car Thomas was in was hit head-on by another driver. Austin and his mother were killed on impact. Eyewitnesses thought Thomas was also dead, but paramedics were able to find a pulse and rushed him to Augusta University Medical Center.

When Thomas’ parents arrived, doctors went through the list of their son’s injuries. Broken neck. Broken back. Broken leg. Broken jaw. All things that could be set or healed, but there was another more serious injury. Thomas suffered a traumatic brain injury, an injury to the brain which can cause physical complications, such as seizures or headaches, and cognitive difficulties, like the inability to recognize common items and an inability to speak or understand words. Doctors believed that Thomas had a 5 percent chance of survival.

Then, doctors discovered that Thomas had a dissected carotid artery, which caused four strokes.

Chances of survival were diminished. Doctors told Thomas’ parents that he wouldn’t survive. Even if he somehow woke up, it was likely that Thomas would never be the Macallin they knew.

“You do not know the God we serve,” replied Stevie Thomas, Macallin’s father.

His faith was confirmed. After seven days in a coma, Thomas woke up. Even though he had a long way to go, he was still Macallin.

Thomas remained in the AU Health trauma unit for 31 days, then was transferred to the Children’s Hospital of Georgia for nine days. His journey wasn’t over, though. He then spent almost four months in Atlanta undergoing therapy and rehabilitation.

On November 3, 2017, almost five months after the accident, Thomas was released from the hospital and returned to his home in Garfield, Georgia. He wasn’t through with doctors, however. Thomas would need to return to AU Health for follow-up appointments and procedures. It was at one of these appointments that he met Nicole Whaley (DNP ’14).

Whaley works in the trauma unit and understood exactly what Thomas was going through and how he was feeling.

Twenty years ago, Whaley was in a car accident that left her with extensive injuries including: collapsed lungs, a ruptured spleen, a punctured bladder, multiple fractures and a traumatic brain injury. A senior in high school like Thomas, Whaley found her entire life on pause.

“When I was in therapy, I remember thinking I should be doing chemistry and calculus,” Whaley recalls. “Instead, my speech therapist was asking me what color a marker was and what it’s used for. I knew in my mind, but I couldn’t say it. It was incredibly frustrating.”

Whaley was experiencing aphasia, an inability to understand or express speech. Aphasia is caused by damage to the brain. Imagine a world like that. A world where you’re trapped in your mind and unable to communicate.

It took two years for Whaley to feel like herself again, but she still had questions about her future. She had always wanted to go to medical school and dreamed of one day being a pediatrician. But was that dream still attainable? The TBI still lingered, and Whaley experienced general pain and suffered from frequent migraines.

She started to consider other ways of achieving her dream of a career in the medical field.

“I started thinking that realistically I wouldn’t be able to stay in school long enough to become a pediatrician,” Whaley said. “I became a nurse and started working in the neuro-intensive care unit, but with my brain injury, I wanted to do something that dealt with the brain and trauma. I wanted to go back to school.”

In 2008, Whaley attended a conference and listened to a speaker talk about acute-care nurse practitioners. A light bulb went off. She returned to school and earned her Doctor of Nursing Practice with a specialty in gerontology acute care.

In spite of Whaley’s traumatic brain injury, she’s devoted her life to medicine and helping her patients heal from an injury that she herself is intimately familiar with.

Whaley’s experience with TBI influences more than just patient care. Her doctoral research involved evaluating the care of patients with moderate TBI using a guideline created by another university.

“I analyzed how we cared for our patients at AUMC and compared that with the guideline,” Whaley said. “We’ve since adopted that guideline based on my research.”

Whaley is currently a contributing author on a research study examining post-traumatic stress disorder in trauma patients. She is also active in helping change or amend departmental policies related to care of trauma patients.

When it comes to patient care, though, Whaley uses herself as an example to bring hope to her patients and to show them that they can get through their injury.

“God left me here for a reason,” Whaley said. “I tell my story all the time. Patients always remark that I made them feel better and that it’s nice to talk to someone who understands.”

For Whaley, being a nurse practitioner is more than just a career choice. It’s her passion, and this much is evident to her patients. It’s clear that she wants to do more than just help them through a tough time. Whaley truly cares.

“If we are at the doctor, and she knows we are there, she will make it a point to come visit, even if we’re on a different floor,” said Shannon Thomas, Macallin’s mother. “You don’t meet many people like that. Many people are about their jobs and their paycheck. Not the people we met at Augusta University Health. They have heart in what they do.”

While Whaley cares for her patients, her mere existence offers a greater gift ­— hope. For Thomas, however, that gift became even more tangible: inspiration.

While in Atlanta undergoing therapy, Thomas was struggling. Before his accident, he was a singer and played guitar, piano and drums. The accident robbed him of these abilities. The piano sat unused; the guitar collected dust. All the while, Thomas struggled to figure out who he was.

It was at one of his follow-up appointments that Thomas talked with Whaley about his injuries and his struggle. This conversation was a turning point.

“Nicole told me that healing takes time,” Thomas said. “She’s a great person, and her telling others her story does help give people a more positive outlook on things. I felt much better and more positive after talking with her.”

It’s more than just her story that helped inspire Thomas, though. It was something else the pair have in common: faith and the shared belief that their suffering had a greater purpose. 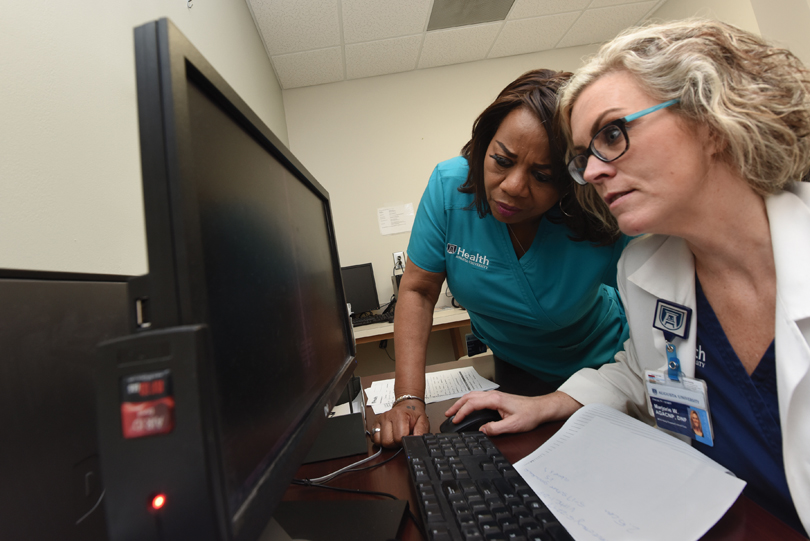 Like Whaley, Thomas believes he found his purpose through his accident. In some ways, his future is similar to Whaley’s. He wants to share his story in hopes of helping others.

“When I was in Atlanta for rehabilitation, I realized what had actually happened to me and what God had done for me,” Thomas said. “I also knew God had something more for me to do.”

“So many people have heard his story,” Shannon Thomas said. “He’s already touched so many lives.”

But Thomas’ plans don’t end there. He wants to return to hospital trauma units, but this time as a visitor. He hopes to use his story to help others. Just like Whaley.

“I have heard patients tell me that ‘because you got through this, I kept going,’” Whaley said. “I hear that a lot.”

Despite all of the hardships both Thomas and Whaley went through, one thing is certain. They have found their purpose.

Like the glow sticks, Thomas and Whaley were broken, and through that brokenness, they became a light. And that light shines as a symbol of hope. 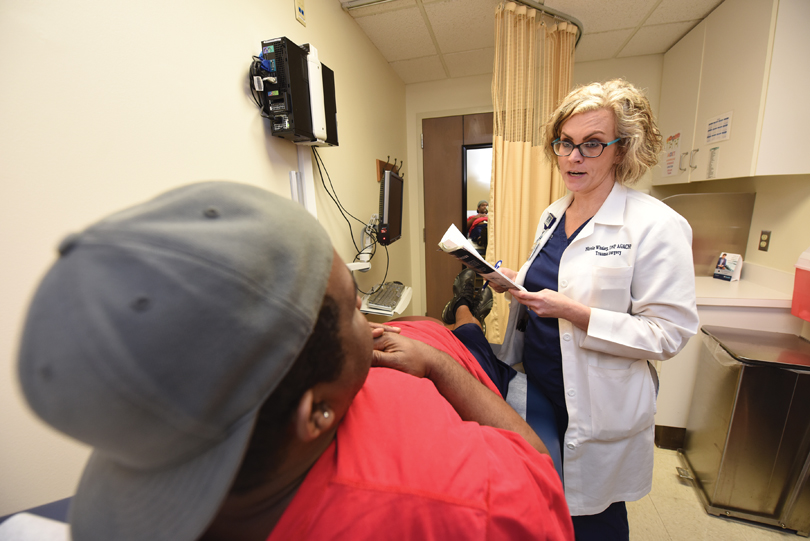