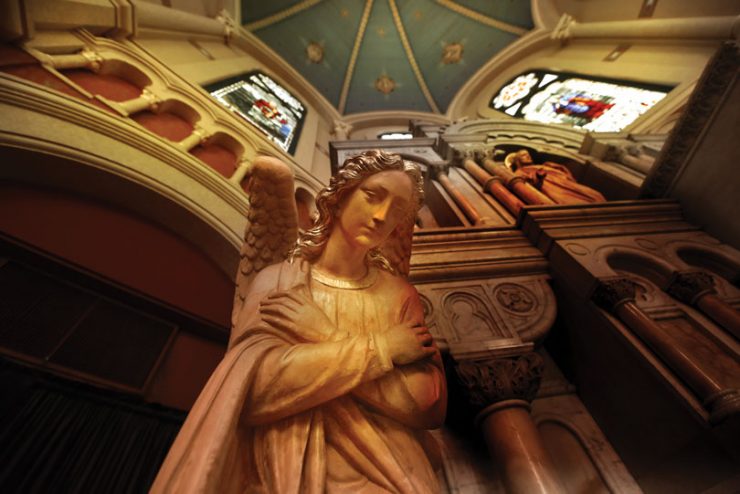 When Sacred Heart Catholic Church was officially dedicated on Dec. 2, 1900, it was called “the handsomest new church in Georgia” and for good reason. The twin-spired Victorian Romanesque church was immediately recognized as an architectural treasure with 15 distinctive styles of brickwork, 94 stained-glass windows and intricately carved Italian marble.

Home to Sacred Heart Academy, a primary and secondary school established by the Sisters of Mercy in 1876 at the request of the Richmond County Board of Education, as well as the short-lived Sacred Heart College, the church was a cornerstone of the entire community before closing in 1971 when the downtown Catholic parishes (Sacred Heart, St. Patrick’s and Immaculate Conception) were amalgamated into the Church of the Most Holy Trinity. Everything of value was abandoned except the pews and the marble sculpture of the Last Supper, which went to Most Holy Trinity.

After the church sat empty and neglected for several years, the Knox family, led by Peter Knox Jr., bought the property with the vision of turning it into a cultural center, transitioning the deconsecrated church into Augusta’s secular holy place.

Opening in 1987, Sacred Heart Cultural Center has become home to several of the city’s arts organizations and a sought-after venue for weddings and other events, including Silent Movie Night and the Sacred Heart Garden Festival, two of Sacred Heart’s three main fundraisers. The third, the Festival of Nine Lessons and Carols, was brought to Sacred Heart by Bill Toole, an Augusta University music professor who not only directed the festival for 28 years, but also served on Sacred Heart’s original board of directors. Toole, who died in 2018, was honored at the December concert.

Now, as those who remember the space as a church are starting to age, the hard work of promoting the building to a new generation is even more important.

“I’d like to invite those long-term Augustans who have seen this as a backdrop to come in and see it and help preserve it for future generations,” says executive director Millie Huff.