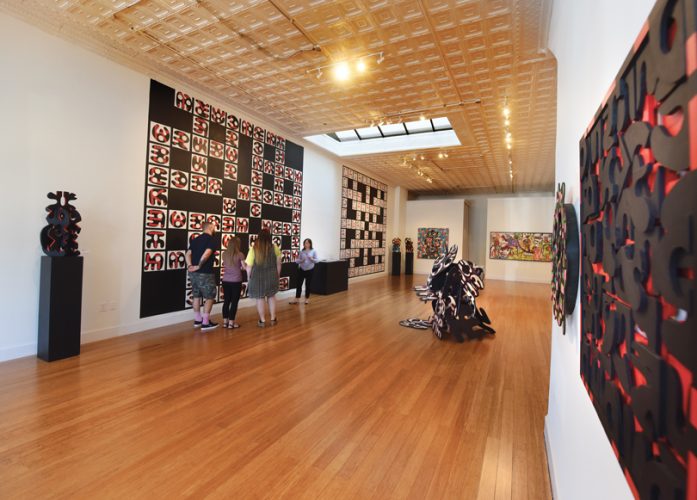 In the Field: Curating a Community Vision

In February, Scott Thorp, chair of the Department of Art (recently renamed the Department of Art and Design) announced a partnership between Pamplin College of Arts, Humanities and Social Sciences and the Westobou Festival that establishes Shannon Morris, director of the Mary S. Byrd Gallery of Art on the Summerville Campus, as the guest curator of the Westobou Gallery in downtown Augusta.

“Rather than just programming space, we’re going to curate an experience that will last over the years,” Thorp told a gallery audience the night of the announcement. “We’re going to walk you up the ladder of art and culture so that over time you’ll see an ebb and flow in this space of cultural development and awareness, and the city will become more prominent in the eyes of the people around us.”

Morris, who joined Augusta University in July 2016, says the collaboration has already been a success.

“It has so much more value than any of us imagined in the beginning, because of the weight that we’re able to bring to what we do and the conversations that we’re able to have with artists both inside and outside the city,” she says. “Art is an important part of the city’s identity, and it also gives a lot of credibility to the university because we’re not just haphazardly throwing art into a space — it’s an intentional plan.”

But what exactly is involved in being a curator?

“It’s more like what’s not involved,” she says. “I’m looking at what’s been done before and what I can pull into the conversation that will not only be relevant to the community, but also to the contemporary world we’re living in. Being a contemporary curator, I’m working with living artists, and they are influenced by what’s going on around them.”

The arts are a major but often overlooked economic driver, Morris says, and with the influx of new people drawn to the area by the explosion of the cyber economy centered around Fort Gordon and the newly established Hull McKnight Georgia Cyber Innovation and Training Center, which is set to open at Augusta University’s Riverfront Campus in July 2018, the value of artistic partnerships has grown even more important.

“I think we’ll definitely begin to see more excitement when we bring people to Augusta from the outside area who are part of the art world other places,” Morris says. “We need more people to be a part of that conversation, and they’re coming.”

Value Added: ‘I have been so fortunate’