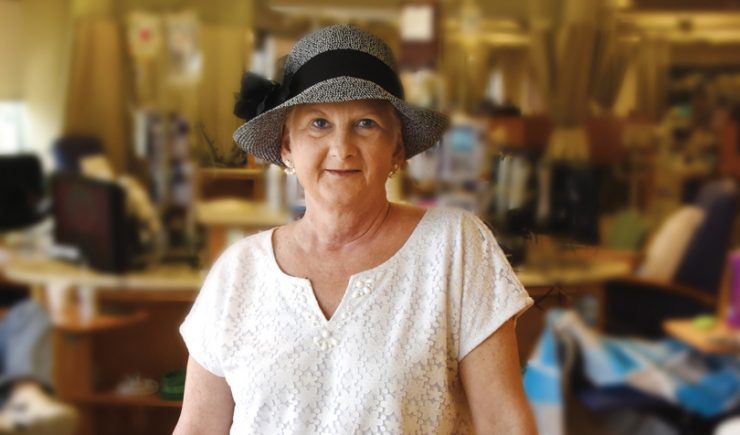 Value Added: ‘I have been so fortunate’

These are unexpected words from a woman diagnosed with Stage III ovarian cancer four years ago who is still in active battle against the disease. But in the face of the physical and emotional challenges inherent in her struggle, Jane Flanders is disarmingly upbeat and sincerely grateful.

Diagnosed in 2013 at the age of 58, Flanders was referred to Dr. Sharad A. Ghamande, associate director for clinical research at the Georgia Cancer Center at Augusta University and principal investigator of the state’s only minority-focused research program.

Selected as one of only 12 in the nation, the GCC’s minority NCI Community Oncology Research Program (NCORP) came with a $3.3 million grant to increase NCI-sponsored clinical trials and cancer care delivery research throughout Georgia, particularly among minority and underserved populations.

After surgery, Flanders was able to participate in a cutting-edge Phase I NRG trial through this NCORP. One year later, a PET scan revealed her cancer in remission, and it remained in remission through mid-2015.

“I’m so grateful that the Cancer Center is here,” she said. “I’ve been able to be involved in clinical trials here that aren’t available anywhere else. Being a part of these studies has allowed me to have good quality of life along this journey.”

At academic medical centers like Augusta University, physician scientists conduct basic science and translational research that can lead to novel treatments. This gives patients the opportunity to participate in clinical trials and receive treatments that would otherwise not be available to them.

Since the cancer’s return, Flanders has participated in several more trials. Under Ghamande’s care, Flanders’ treatment is closely monitored, so changes can be made as soon as they are warranted. A recent scan showed an encouraging partial response.

While her struggles have been challenging, Flanders’ outlook remains positive. She’s an active member of the CSRA Gynecological Cancer Support Group at Augusta University, a grassroots effort that connects patients in a network of understanding and encouragement, and she is grateful for the top-quality care she has received.

It is that gratitude that often inspires patients and family members to earmark gifts to clinical trials and research that personally touched them or a loved one. For example, an anonymous donor recently gave $500,000 in honor of his late wife, who lost her battle with cancer. The gift will support research to develop more effective treatment methods for female cancer patients.

Private donations are critical to funding such cutting-edge research, and Flanders is immensely grateful to those who give.

“I’m in awe of the people who do that,” said Flanders. “Someone with a generous heart, who knows what the struggles are … that they are willing to share what they have to help someone else.”

“Without those folks, we might not have a facility so state-of-the-art,” said Flanders. “I wish I could write each of them to tell them how thankful I am.”

History and Heritage: A Family Legacy