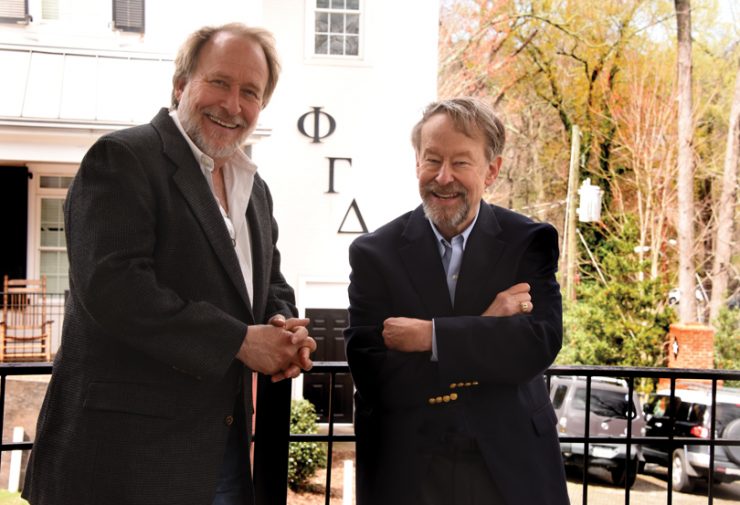 The motto of the Phi Gamma Delta fraternity is “Not for College Days Alone,” solidifying the idea that the brotherhood and support that come with joining lasts well beyond college years. On its recruitment website, they boast, “You may graduate from your college, but you never graduate from Phi Gamma Delta.”

Both joined the fraternity as undergraduates at the University of Georgia, and together with some of their fellow brothers they have recently founded the Cloverhurst Benevolent Foundation, to assist brothers who suffer with substance abuse, clinical depression, family, professional or financial problems.

The story of how and why starts with Facebook.

After graduating from UGA in 1979, Jarman headed to medical school, then residency, got married, then moved to New Orleans and started a family. He returned to Atlanta to settle down permanently and before he knew it, it had been nearly 30 years since he’d had any real contact with his fraternity brothers, who are affectionately called Fijis.

“And then Facebook popped up,” he remembers. “I joined, started a page, and started making connections with Fijis I hadn’t seen or thought about in years.”

One of his former brothers – a new Facebook friend – encouraged him to attend the UGA Chapter’s Pig Dinner that year, the annual alumni dinner that reunites graduated Fijis and their undergraduate brothers. They could even ride together, the friend suggested.

“He said you’re not going to recognize me when you come to pick me up, but I’ll tell you all about it on the way to Athens. He was right,” Jarman remembers. “I wasn’t that close to him in college, but I remembered him as this tall, thin guy with wiry blonde hair. When I got there to pick him up, I found a heavyset bald man with glasses that looked nothing like him. He might have looked like what I imagined his grandfather looked like.”

Over the hour-and-a-half drive, his fraternity brother told him how his life had fallen apart. He’d graduated college, gotten a master’s degree in business and become a successful corporate executive. But his executive job title came with many after-hours commitments, where the alcohol flowed and he’d started drinking, socially at first, but then more and more.

“He became an alcoholic,” Jarman said. “To cut to the chase, eventually, he lost his marriage, he lost his job and he became homeless. When he said homeless, I assumed he meant he lost his house in the divorce, but he had lived on the streets. He had no one to turn to.”

When they arrived at the dinner and he began asking about other brothers he remembered fondly from college days, similar stories played out over and over again.

“I heard, ‘He’s dead. He’s dead too. Him too,’ over and over,” he says. “I began to find out that a lot of these early deaths were from things like drug and alcohol abuse and suicide.”

How could these things have happened to his brothers – members of a fraternity famous for producing U.S. Presidents, Vice Presidents, even Pulitzer Prize winners, he wondered. How could they have had no support system to turn to? “Even from our ‘Not for college days alone’ fraternity?”

Jarman, who practiced emergency medicine, but had a deep, abiding interest in psychiatry, decided it was time to do something to help.

“I began to think about an organized way to help guys that have fallen by the wayside and have no other support system,” Jarman says. “I went to the (undergraduate) chapter and gave a talk on depression and alcoholism, but it just wasn’t the right time. It just fizzled out.”

But two years later, the group found out about another brother in crisis – going through a divorce, suffering from severe alcoholism and having tremendous financial problems. They set up an intervention and were able to get him into a rehab facility.

The timing was right.

He talked to Richwine, a Gainesville plastic surgeon, and a few other UGA Phi Gamma Delta brothers and together they created the foundation – aptly named after their fraternity house, which still sits on Cloverhurst Court in Athens.

“After he got out of rehab, we brought this guy in as our first ‘client,’” Jarman says. “We helped get him a job, financial counseling, legal counsel and then we met with him weekly and gave him homework assignments. After about three months, we stepped back. We learned a lot through that – what we were doing right what we were doing wrong.”

It was a beginning.

“We’ve identified about a dozen people from our chapter that have had problems (in the past). Those are the ones that we know of. Maybe there are others that had support systems,” Jarman says.  “We want to create this organization as a model for other (Phi Gamma) chapters. We want this to spread to other Greek organizations outside of Phi Gamma Delta, too.”

There are no requirements to get help from the foundation and their work is confidential.

The focus until they find their next client, Richwine and Jarman say, is getting the word out that the foundation exists and building its finances.

“We want to really get out the word that if you’re having trouble, it’s part of life, if you need a good support system, we’re here. We just want people to understand that we’re available, we’re sort of on call,” Richwine says. “We have a lot of very successful brothers, but the reality of it is that even if you’ve got a group of high-functioning folks, somebody is not going to get to that level. Someone is going to have trouble. To deny that is coming is just sticking your head in the sand.”