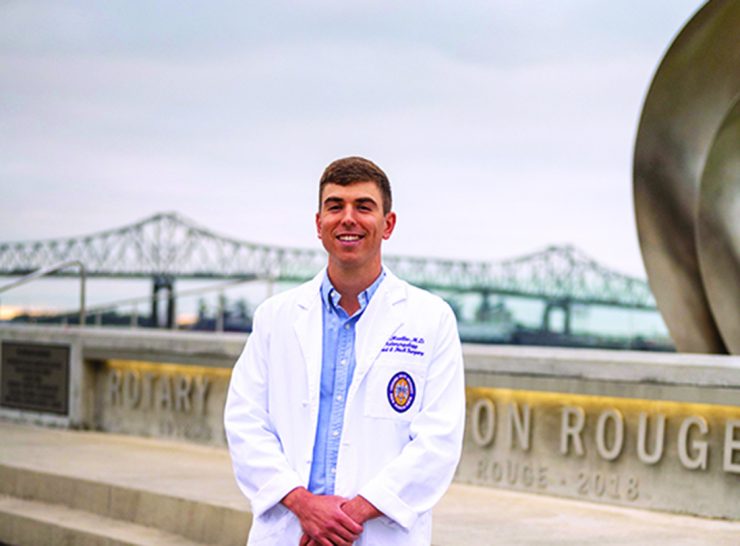 The $40,000 annual John F. Beard Award is given by William Porter “Billy” Payne and his wife, Martha, to a graduating MCG or health sciences student who exemplifies caring and compassion in health care. Payne, the immediate past chairman of the Augusta National Golf Club, established the Beard award in 1998 in memory of his father-in-law, who died of cancer in 1997. The award honors the university’s President Emeritus Francis J. Tedesco and Beard’s physician, Dr. Mark F. Williams, a 1988 Medical College of Georgia graduate who treated Beard during his hospitalization at Augusta University Medical Center.

During his time at the university, he was an exemplary classmate – serving as a class liaison for the medical college’s class of 2021. In this role, he served as a mentor for incoming medical students, helping to ease their transition throughout their first two years. Mueller was also chosen by his classmates and faculty for induction into the Gold Humanism Honor Society for his dedication to leadership, clinical compassion and service.

While a student, he worked to close the health disparity gap among Augusta’s minorities by serving as a co-coordinator of the Salvation Army Homeless Health Clinic in Augusta and providing care at the Medical College of Georgia’s Equality Clinic and the Wesley United Methodist Faithcare Clinic.

In addition to serving locally, Mueller, who is a first-year otolaryngology resident at Louisiana State University, participated in numerous medical mission trips to Central and South America, as well as Egypt.