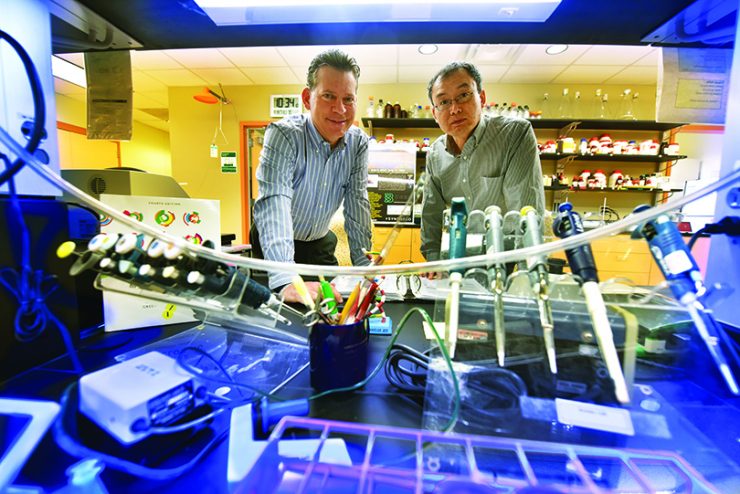 It’s a skill set as old as bacteria that is finding new life in science and health care.

CRISPR, where disease-causing mutations can be snipped away and replaced with a synthetic, correct version, is the latest and some say most economical, fastest, simplest and accurate of the gene editing tools opening the door to studying, correcting or preventing genetic disease.

And there’s a lot of work to be done. Most complex diseases, like cardiovascular disease, cancer and neurodegenerative conditions, are a combination of genetic and environmental factors. Others like cystic fibrosis, sickle cell disease and Down syndrome are believed to be purely genetic, and it’s their significant symptoms, rather than the cause, that traditionally get addressed.

CRISPR is helping cut to the cause, say two experts in the field who joined the MCG faculty this fall.

Dr. Lin Gan, neurodevelopmental biologist and geneticist, has been recruited to the Department of Neuroscience and Regenerative Medicine as founding director of the Transgenic and Genome Editing Core, whose offerings include transgenic mouse production, targeting genes in embryonic stem cells and the use of CRISPR.

Dr. Joseph Miano, experimental pathologist and molecular biologist, whose lab was among the first wave to use the revolutionary genome editing technology to alter the mouse genome, has been recruited to the Department of Medicine, which is significantly expanding its research initiatives under the leadership of new chair Dr. Brian Annex (see page 9). Both CRISPR experts are from the University of Rochester.

Biological warfare
Bacteria are even more susceptible to viral infection than humans. In fact, viruses would actually rather attack a bacterium than a human and it was bacteria that were the first found to be proficient at using a form of precise gene editing to protect themselves.

At entry, a bacteriophage, viruses that infect bacteria, will try to insert some of its own DNA into the bacterial cell so it can replicate in its bacterium victim.

CRISPR, or clustered regularly interspaced short palindromic repeats, are DNA fragments a bacterium instead cuts from the virus and tucks away into its own genome so, much like vaccines work, it can easily recognize and destroy the virus — or a similar virus — should it try to infect the bacterium again.

“The bacterium tries to cut the virus into pieces to destroy it and, at the same time, incorporate some of its sequence, which is unique to that virus, into its genome,” says Gan. “It becomes a hardwired memory,” adds Miano, and the result is “biological warfare.”

This piece of viral DNA now surveils for a similar virus moving in, then takes advantage of an endogenous knife, in this case mostly the enzyme Cas9, to cut the virus’ DNA and kill it.

“It’s an elegant biological system that has been repurposed for the modification of genes or DNA,” says Miano. Another way he describes CRISPR is molecular surgery on your DNA.

For such submicroscopic surgery, scientists improvise a bit on bacteria’s approach, creating what’s called a guide RNA, which works like a GPS to usher the scissors, Cas9, to the “molecular address” where the gene editing of a mutation is desired. In just the last month, a newer version called prime editing has emerged that Miano notes will provide even greater precision and more versatile editing than the more standard version that has been used over the last seven years.

The cut and struggling cell initiates a recovery process, which is when scientists can insert a third component, which is a synthetic version of the correct DNA, a short snippet, Miano says that will be incorporated into the recuperating cell much like a knee joint implant and that viral DNA that snuggled into the bacterium’s genome. The gene edit will hold up in any daughter cells that emerge in that mouse or human.

Miano likens CRISPR editing to a word processing system wherein a misspelled word is corrected by deleting the wrong letter and replacing it with the correct one.
Bottom line: the mutated gene is corrected to a normal state. 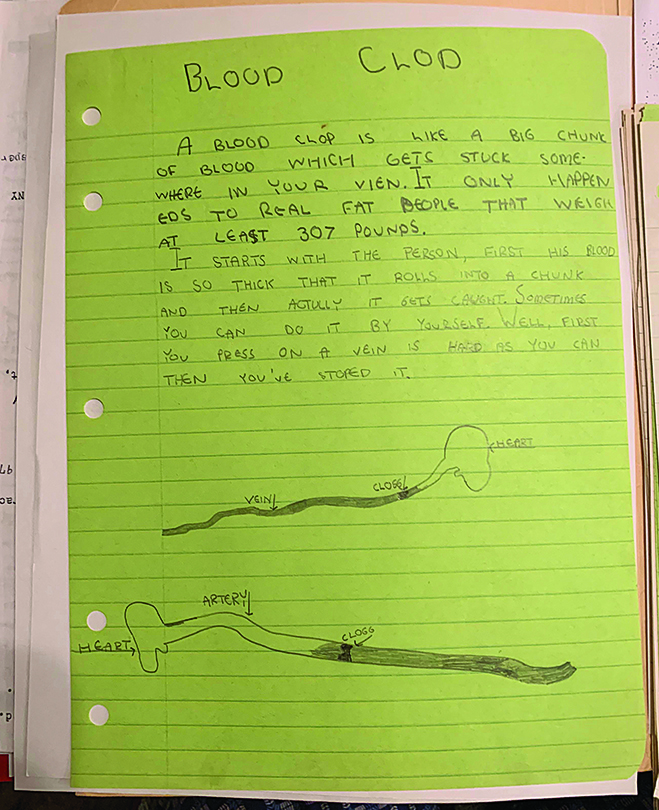 Reverse attack
CRISPR in reverse enables the scientists to create a mutation in mice that mimics a mutation in humans and improve the translatability of whatever they find in mice back to humans. Gan and Miano will be doing of lot of this human disease modeling at MCG.

“It is amazing,” Gan says matter-of-factly of the approach, which enables him to create in a mouse the precise genetic mutation(s) that is causing disease.

“When we find a mutation that can affect the eye, for example, we want to know how the mutation works at the molecular level so we can go to the animal model and introduce exactly the same mutation,” he says. “We call it a humanized model,” and it enables detailed studies of the mutation’s impact. In the blinding diseases Gan studies, for example, does the mutation affect a particular vision function, like the retinal ganglion cells at the back of the eye, which send images to the brain, and what does it do to the cells.

For these perusals, they can either replace the mouse gene with the actual human mutation or create a similar mutation in the mouse. More than one mutation can be corrected and created simultaneously using CRISPR, although Gan notes that the efficiency of the system decreases with additional mutations.

In a process called reverse genetics, they also use CRISPR to help figure out what disease(s) is associated with a clear mutation of an important gene that has been found in an initiative like large, genome wide association studies, or even a rare mutation they suspect is causative.

The National Institutes of Health and others are already exploring the potential to cure sickle cell disease in people by using gene editing to increase their level of fetal hemo-globin, which cannot sickle and which most of us stop making shortly after birth. In some of these human studies, they are first removing the blood precursor stem cells then using CRISPR to disable a gene that suppresses fetal hemo-globin production. Massachusetts Eye and Ear Infirmary also has begun to use CRISPR to correct an inherited form of blindness, Leber congenital amaurosis, a rare condition affecting the retina.

While Gan will be doing his own studies here, through the new core he now directs, he wants to also accelerate the work he began in Rochester to help other scientists by helping them create better models. He saw there that the synergy ultimately means everyone has a bigger impact. That includes continuing to work with Miano, with whom he has already produced about 30 animal models.

The scientists also appreciate concerns about CRISPR, including its ability to edit reproductive cells like sperm and eggs, edits which will also be passed along to future generations, as well as rare situations called off targeting where the guide RNA finds the wrong molecular address.

But they are also are very excited about the evolving potential of this powerful technology with comparatively humble roots.

Gan earned his PhD in biochemistry and molecular biology from the University of Texas Health Science Center at Houston and completed a postdoctoral fellowship in biochemistry and molecular biology at MD Anderson Cancer Center. He joined the faculty of the University of Rochester School of Medicine and Dentistry in 1999, was named director of the De Stephano Laboratory for Retinal Genomics in 2005, director of Mouse Genome Editing Research in 2006 and served as director of research for Rochester’s Flaum Eye Institute from 2009-13. Gan was named an endowed Dean’s Professor in 2009. His studies of retinal and inner ear development are funded by the NIH and he is a reviewer for more than 30 journals. At MCG, he is founding director of the Transgenic and Genome Editing Core and Georgia Research Alliance Eminent Scholar Chair in Neuroscience. His research focus is genetic causes of deafness and blindness for which there are no cures. He studies how both hearing and sight develop correctly and how problems happen, like work to identify genes and pathways involved with retinal ganglion cells, found at the back of the eye, and impacted in conditions like glaucoma and retinopathy of prematurity. Genes he has already found led to associations in glaucoma as well as children born with too small optic discs.

Since childhood, this south China native has been interested in how plants and animals grow and function, in fact he still loves to garden. “In science and medicine everything goes to genes and proteins and how they function,” he says, and remains amazed today at how each of our some 20,000 genes can produce on average three proteins, some as many as 10. When asked to describe a gene to a child, he describes it as one of many parts that make a house and, similar to houses, depending on how we are built, some of us are more at risk for calamity than others.

Miano, the new J. Harold Harrison, MD, Distinguished University Chair in Vascular Biology at MCG, earned his PhD in experimental pathology from New York Medical College and completed postdoctoral studies in molecular biology at MD Anderson Cancer Center. He joined the faculty of the University of Rochester School of Medicine and Dentistry in 1999. He has served as associate director of Rochester’s Aab Cardiovascular Research Institute and chaired the Mouse Genome Editing Core Oversight Committee. He is associate editor of the journal Cardiovascular Research and an editorial board member for the Journal of Biomedical Research, Arteriosclerosis, Thrombosis & Vascular Biology, Cardiovascular Research and Scientific Reports.

As a child, Miano drew pictures of blood vessels and hearts, parts which inexplicably fascinated him then and now. Genes, wherever they are, also have captured him in the last decade, as well as the DNA that turns them on or off. His studies of how gene expression is turned up or down during heart and blood vessel development and disease is funded by the NIH. His work includes using CRISPR to try to repair a gene mutation he actually found in vascular smooth muscle cells, which causes a lethal gastrointestinal defect that leads to early death in babies. He and Gan hope this kind of work will lead to repair of lethal or debilitating genetic problems, like Usher’s syndrome, during development so a healthy baby is born.