An ingested liquid that ultimately delivers a small dose of carbon monoxide to the eye appears to target key factors that damage or destroy vision in both type 1 and 2 diabetes, scientists say.

The MCG scientists have early evidence that HBI-002, a low-dose oral 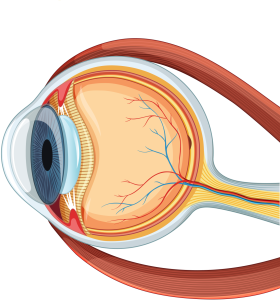 compound developed by Hillhurst Biopharmaceuticals and already in early stage trials for sickle cell disease, can safely reduce oxidative stress and inflammation in the retina, both early, major contributors to diabetic retinopathy.

While we likely think of chirping detectors in our homes, toxic fumes from cars and trucks and even death when we think of carbon monoxide, many of our own cells and tissues are actively and regularly producing small amounts of the colorless, odorless gas to protect themselves from the damage of high and/or chronic inflammation and oxidative stress, says Dr. Ravirajsinh Jadeja, MCG biochemist.

The enzyme heme oxygenase 1, is a common component of many tissues including oxygen-carrying hemoglobin and immune cells, whose jobs include reducing oxidative stress and inflammation, and one of the ways it does that is by releasing small amounts of carbon monoxide. In fact, heme oxygenase 1 is naturally upregulated in our cells in response to increased levels of the destructive states.

Unlike in our homes when fuelburning furnaces can cause high levels to accumulate, the small, steady production and the cell machinery that use it also mean the carbon monoxide we make doesn’t accumulate in our body, says Dr. Pamela Martin, cell biologist and biochemist in the MCG Department of Biochemistry and Molecular Biology and Vision Discovery Institute at Augusta University.

But in diseases like diabetes, those natural protective mechanisms fail. “We have to think of ways to enhance or reestablish those mechanisms that would normally protect us,” Martin says.

The scientists have early evidence that HBI-002, a liquid that converts to the familiar gas when it hits our intestines, can help our retinas, which are damaged in nearly half of people with diabetes, do that.

Their preliminary studies indicate HBI002 turns into carbon monoxide’s more familiar gaseous state in the intestines, where it naturally binds to hemoglobin — the oxygen-carrying component of blood — then travels up to the eye in the blood, Jadeja says. Once in the retina, the small dose of carbon monoxide finds the heme oxygenase enzyme in retinal cells and helps induce the steps that normally yield its desired antioxidant, anti-inflammatory action.

To objectively measure its impact,the scientists have functional tests that — much like an electrocardiogram of the heart, but in this case it’s an electroretinogram — produce peaks and waves, which indicate how different cells are firing and signaling. They can also look directly at the retina for telltale signs of damage: Diabetes prompts cell death and a thinning of the retina, and can cause retinal detachment. RNA and protein analysis will give more evidence of whether they are getting increased expression of good genes and decreased expression of the problematic ones in response to treatment.

If the evidence of HB1-002’s benefit continues to hold in their studies over the next 12 months, it will lead to more studies honing in on how this carbon monoxide compound is working against the ravages of diabetic retinopathy, exploring optimal doses, how often it should be given and more.