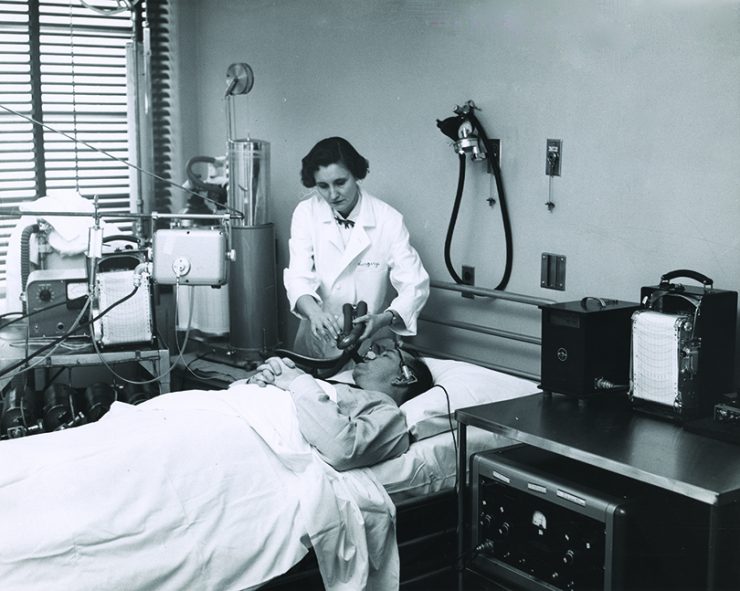 Dr. Lois Taylor Ellison, ’50, a clinician, researcher, educator and administrator whose 75-plus-year affiliation with the Medical College of Georgia left a lasting legacy on the institution and on health care in general, died on Saturday, April 20, at the age of 95.

A graduate of the University of Georgia, earning a bachelor’s degree in chemistry and zoology in less than three years rather than the standard four, Ellison was one of only four females in a class of 78 students when she enrolled at MCG in 1943. Her medical education was interrupted by a battle with tuberculosis but she persevered and graduated in 1950. After completing a cardiopulmonary physiology fellowship, she was appointed to the faculty where she helped develop MCG’s cardiopulmonary laboratory, serving as director until 1992.

She was named a research fellow and established investigator by the Georgia Heart Association and received a Research Career Award from the National Heart Institute (now the National Heart, Lung and Blood Institute) from 1963-68. She published 73 articles in scientific journals and made numerous presentations at meetings primarily related to preoperative and postoperative studies, open-heart surgery, alveolar surfactant and cardiovascular and pulmonary physiology.

In the 1970s, her career began to shift into administration. In 1974, she was named MCG’s associate dean for curriculum. A year later, she was named university provost, second in line to then-President William Moretz, making her the highest-ranking female in U.S. medical schools.

As MCG’s physical plant grew, she oversaw the expansion of clinical facilities as associate vice president for planning (hospitals and clinics). Campus additions during her tenure included the Ambulatory Care Center/Specialized Care Center and the Children’s Hospital of Georgia.

Ellison retired as Professor Emeritus and Provost Emeritus in 2000, but stayed on as MCG’s Medical Historian in Residence. She meticulously gathered and chronicled materials about the university’s heritage, including writing the publication Moments in History in observance of MCG’s 175th anniversary.

Ellison was a member of the Board of Directors of the Oak Ridge Associated Universities, the Widow’s Home, the Chamber of Commerce of Greater Augusta, Junior Achievement of Augusta and the YMCA of Augusta. Among the honors she received were the MCG Distinguished Alumnus Award, the MCG Lifetime Achievement Award, and together with her husband, Dr. Robert G. Ellison, ’43, the Vessel of Life Award, MCG’s highest award. She was included in the 2003 National Institutes of Health National Library of Medicine exhibition, Changing the Face of Medicine – Celebrating America’s Women Physicians.

Ellison and her husband, the former chief of cardiothoracic surgery at MCG, raised five sons, three of whom are graduates of MCG.