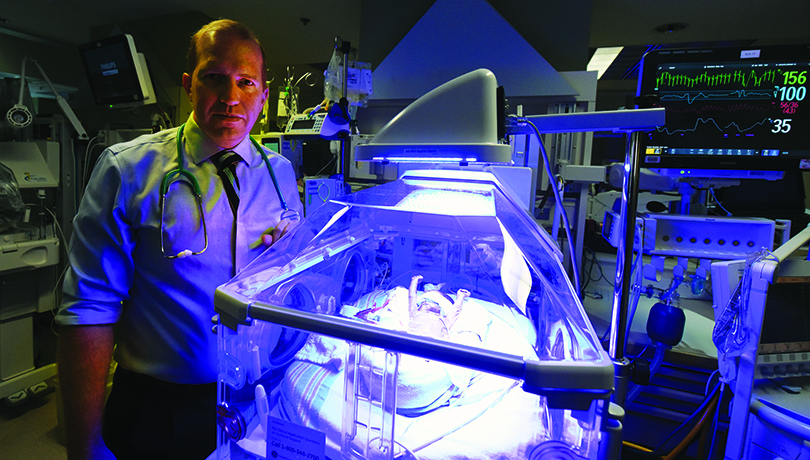 Dr. Dan DeLoach, ’73, is the 2019 recipient of the MCG Distinguished Alumnus for Loyalty Award.

DeLoach, who recently retired as a plastic surgeon, has been a longtime board member and former president of the Medical Association of Georgia and helped bring MCG and MAG closer together. He is a longtime leader in the MCG Alumni Association, including serving as president in 2006, and as an active board member since 2003. He also served as chair of the board of the MCG Foundation from 2007-08.

Governor Sonny Perdue appointed DeLoach to the Georgia Board for Physician Workforce in 2009 and Gov. Nathan Deal appointed him to the Georgia Composite Board of Medical Examiners in 2012, where he is still a member. He helped establish MCG’s Southeast Campus, for third- and fourth-year medical students, based in Savannah at St. Joseph’s/Candler and in Brunswick at Southeast Georgia Health System.

After completing his medical degree, DeLoach completed his general surgery residency at Memorial Medical Center in Savannah and his plastic surgery training at the University of Tennessee Clinical Education Center in Chattanooga.

As mentioned in the Fall/Winter 2019 edition of MCG Medicine, the late Dr. Marion Jordan, ’69, is the posthumous recipient of the MCG Distinguished Alumnus for Professional Achievement Award. As mentioned in this issue, Dr. Renee Hilton, ’11, is MCG’s Outstanding Young Alum.

Dr. Brian Stansfield, ’04, a neonatologist and member of the MCG Vascular Biology Center, has been elected president of the Southern Society for Pediatric Research.
Stansfield will lead the group through 2020 and will organize its annual meeting in New Orleans next year. The society was organized in 1960 as a forum for pediatric investigators from the South to present their work and to support career development and leadership in academic pediatrics. Its primary mission is to support and grow the next generation of academic pediatricians and to propel them to national and international recognition.

Prior to being elected president, Stansfield served the society as council member from 2016-18 and an institutional representative from 2014-16. He received the group’s Young Faculty Award in 2017 and 2018.

In 2016, he received its Clinical Science Young Investigator Award, recognizing exemplary clinical research by an early career investigator, for his studies identifying risks of metabolic disease and adiposity associated with being a low- or high-birthweight baby. His studies of 575 adolescents showed that either extreme appears to increase the risk of visceral adiposity — fat around organs in the abdominal cavity — and increase the risk of heart disease and insulin resistance.

Dr. Jack F. Shern, ’07, has been selected as a Lasker Clinical Research Scholar, a joint initiative of the National Institutes of Health and the Albert and Mary Lasker Foundation, to foster the next generation of clinical scientists. The competitive program provides early stage researchers the opportunity to carry out independent clinical and translational research for five to seven years at the NIH. Researchers also have the possibility of additional years of financial support at the NIH or an NIH-funded research institution, upon project review.

Shern, who works in the Pediatric Oncology Branch of the National Cancer Institute’s Center for Cancer Research, focuses his research efforts on genomic and molecular approaches to understanding the causes of childhood malignancies, with the goal of defining and developing precision therapies that target underlying genetic mutations that cause the production of tumors.

Shern earned his undergraduate degree at Notre Dame and completed his residency training at the University of Chicago Comer Children’s Hospital, followed by a pediatric hematology/oncology fellowship offered jointly by the NCI and Johns Hopkins

He and seven other newly named scholars join 15 Lasker Scholars hired since 2012.

Dr. Arthur Fleischer, ’77, medical director of Ultrasound and Cornelius Vanderbilt Professor of Radiology and Obstetrics and Gynecology at Vanderbilt University, received the Laurence (Larry) A. Mack Lifetime Achievement Award at the 2018 Society of Radiologists in Ultrasound Annual Meeting held in October in San Diego. He was recognized for his contributions to the clinical applications of ultrasound through teaching and research.

Fleischer has been actively involved in multiple research projects throughout his career. His clinical research has contributed to new applications of ultrasound, including transvaginal sonography, color Doppler sonography and contrast agents (microbubbles) for oncologic diagnosis and potential treatment.

He is involved in several NIH-funded clinical trials involving early detection of ovarian cancer with contrast-enhanced transvaginal sonography, use of contrasted sonography for enhanced characterization of liver lesions and detection and quantification of lymphedema in patients with head and neck cancers. He has authored more than 200 scientific papers and 24 books, including his recently published edition of Fleischer’s Sonography in Obstetrics and Gynecology: Textbook and Teaching Cases, which is referenced internationally by his peers.

He has contributed to improvements in hospital quality scores, and his oversight of patient quality and safety and overall clinical effectiveness at AU Health has been evident, according to health system leadership. Coule is an expert in emergency medicine, disaster preparedness and mass casualty triage, he serves as medical director for AirLife Georgia’s helicopter transport service and is on the board of the National Disaster Life Support Foundation. He is also director of the hospital Emergency Communications Center and helps coordinate the hospital’s emergency response during disasters and mass casualty events.

The $12,000 scholarship will be awarded annually to a Haywood county nursing student pursuing an associate degree in nursing at HCC and will include funding for tuition, books, fees and other expenses such as uniforms, transportation and technology needed for coursework.

Sharpton founded Haywood Surgical Associates, where he practiced surgery for 31 years, retiring in 2010. He also served for many years on the Haywood Regional Board of Trustees and practiced at the original Haywood Hospital before transitioning to the new facility in 1979.

University Hospital cardiologist Dr. Mac Bowman, ’77, recently presented a CPR kit to A.R. Johnson Health Sciences and Engineering Magnet School in Augusta during a talk with students about the school’s history. The kit contains multiple miniature manikins that teach students how hard to press when administering CPR. It will also help the school meet a state mandate requiring students in 38 states, including South Carolina and Georgia, to be trained in CPR before they graduate high school.

Dr. Stan Dysart, ’81, an orthopaedic surgeron, has been named the 114th president of the Cobb County Medical Society.

Dr. Dave A. Ringer, ’86, has been appointed chief executive officer of The TenderCare Clinic in Greensboro, Georgia.

Dr. Gary Walsh Thomas, ’87, received the College of Charleston’s Pre-Medical Society’s Outstanding Service Award in Medicine. Thomas established an oncology practice on Hilton Head Island in 1993, which became South Carolina Cancer Specialists. Over the past 25 years, he has become one of the leading oncologists in South Carolina, recently serving as president of the South Carolina Oncology Society.

Dr. Matthew Clark, ’95, a Navy veteran and owner of Covenant Family Allergy in Belvedere, South Carolina, has been named a “patriotic employer” by the U.S. Department of Defense. The honor is bestowed by Employer Support of the National Guard and Army Reserve.

Dr. Derek Heard, ‘99, is the new Assistant Primary Care Medical Director for Phoebe Physicians in Albany, Georgia. Heard also serves as the chair of the Southwest Georgia Diabetes Coalition, is a member of the Board of Directors for the Georgia Academy of Family Physicians and was named the 2017 Phoebe Physician of the Year.

Dr. April Hartman, who completed her pediatrics residency at MCG and AU Health in 2001, has been named chief of the Division of General Pediatrics and Adolescent Medicine at MCG and the Children’s Hospital of Georgia.

After meeting hundreds of African-American, Latina and Asian teenage girls throughout her career, author Dr. Kela Henry, who completed her family medicine residency at MCG and AU Health in 2002, wrote a book for teen girls that emphasizes the importance of decisions. Told in narrative form, Nia & The Numbers Game: A Teenager’s Guide to Education, Relationships & Sex is a new user-friendly guide for adolescent girls that helps them learn about the changes occurring in their bodies and how to best navigate the circumstances of their teenage years.
Henry runs a successful practice in the metro Atlanta area, which is part of the Emory Healthcare System.

Dr. Jason R. McClune, ’06, has joined Memorial Health University Physicians Lung & Sleep Care in Savannah, Georgia. An interventional pulmonologist, McClune specializes in diagnosing and treating diseases of the airways, the pleura and cancers of the chest and lungs.

Dr. Justin “Mac” Vining, ’08, a pediatric cardiologist, has been named to the Medical Advisory Board for SafeBeat Initiative, a national initiative that establishes local and regional preventative heart screenings in an effort to prevent sudden death in youth and create a healthier generation throughout America’s public middle/high school systems.

Dermatology: From Division to Department