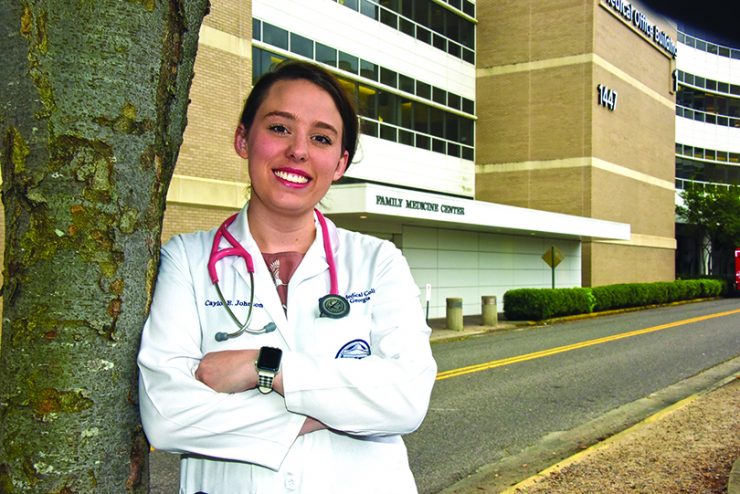 Dr. Caylor Johnson, ’19, had the childhood of her dreams in tiny Mountville, Georgia, where she and her family lived on a couple acres of land and her closest neighbor lived a mile down the road.

The small Troup County community offered the best of both worlds — country living with a city infrastructure, like good schools and access to hospitals, just a few miles away in LaGrange.

She didn’t realize just how lucky until the crippling abdominal pain started her freshman year of high school.

“We went to the emergency room at (WellStar) West Georgia Medical Center first,” Johnson remembers. “The pain would come and go. They sent me for all sorts of tests, but they couldn’t figure out why I was having these spells.”

When the symptoms returned, her parents decided instead of heading the few miles to the hospital in LaGrange, it was time for a second opinion … 62 miles away at Children’s Healthcare of Atlanta’s Egleston Hospital. There, pediatric gastroenterologists were able to diagnose a redundant (or too long) colon and a volvulus of the intestine, when the organ twists around itself. It explained the coming and going of her symptoms as the intestine twisted and untwisted.

Surgery to tack her colon in place was scheduled, but before they could get Johnson to the operating room, it twisted again, this time cutting off blood supply.

It was then that she realized how fortunate she truly was.

“I had emergency surgery and hemorrhaged,” Johnson says. “I lost about three feet of colon and I’ve got lots of pretty scars. I was really lucky that my parents were able to provide for me going to Atlanta. Otherwise, I wouldn’t have had access to the surgeons and sub-specialists I needed to get through that.”

Troup County, like 88 other Georgia counties, is designated as a Primary Care Health Professional Shortage Area by the Health Resources and Services Administration. While the 446 square mile county’s 131 physicians may seem like a lot, a single doctor, regardless of specialty, would have to carry a load of nearly 600 patients to meet the needs of the nearly 70,000 people living there.
Primary care physician numbers look worse. The county only has 10 pediatricians, 12 family physicians, 18 internists, four emergency medicine physicians, nine obstetrician/gynecologists and seven general surgeons, according to the Georgia Board for Physician Workforce. There are no pediatric gastroenterologists.

That reality wasn’t lost on Johnson.

“Being exposed to the medical field as a patient and seeing what a lack of access could mean …,” Johnson drifts off. “We had the ability and (my parents) had the resources and education to know that maybe we should seek out a specialist. The doctors in LaGrange were fantastic, but this was just something they weren’t trained to handle.”

The experience also further cemented Johnson’s desire to pursue a career in medicine. Her school teacher mom and construction business owner father had told her that even at a young age she’d always told them she wanted to be a doctor.

Despite a nearly yearlong recovery after surgery, Johnson was able to stay on track at LaGrange High School and graduate at the top of her class. She attended Mercer University and was admitted to MCG in 2015. She came to the state’s public medical school knowing what type of doctor she wanted to be.

“I grew up with a really awesome, small-town family doctor, Dr. Woody Jones. It was just a small practice, and I wanted that. I wanted to be a part of a community,” she says.
Johnson knew early that meant pursuing a primary care specialty, but she wasn’t sure which one.

“I got to see everybody and get to know people and their families,” says Johnson, who matched with the MCG and AU Health Family Medicine Residency Program this spring. “I realized this was it for me.”

Treating people requires getting to know them and their families, she says. That includes knowing their background, where they live, what they do for work, for example. Giving someone medicine for their high blood pressure or diabetes is one thing, but “How am I going to help them if I don’t know why they’re diabetic or have high blood pressure? What if they don’t understand that their habits are contributing to their disease? What if they don’t have access to healthy food? What if they don’t even know what types of food they should be eating,” she asks. “People need that family doctor, someone whose going to follow them from day one to 10 years later. They need someone to see the big picture.”

It’s a mindset she sadly acknowledges many people don’t have these days.

A national poll of 1,200 randomly selected adults conducted last year by the Kaiser Family Foundation for The Washington Post found that 26% said they did not have a primary care provider. There was a pronounced difference among age groups: 45% of 18- to 29-year-olds had no primary-care provider, compared with 28% of those 30 to 49, 18% of those 50 to 64 and 12% ages 65 and older.

“If you look back at our grandparents and parents’ generations, they all had a family doctor. But I also think it’s an access issue,” Johnson suspects. “We’re closing a lot of community hospitals and a lot of local clinics are following suit. When we lose primary care doctors, we aren’t giving our patients the best care possible.”

The situation is dire and the solution is complex.

Six rural hospitals have closed in Georgia since 2010. Eight counties in the state have no physician; 11 have no family medicine physician; 37 no internist and 63 no pediatrician.

A good place to start fixing the problem, Johnson thinks, is continuing to build a pipeline of medical students from underserved and rural areas of the state. “It’s really hard, if you didn’t grow up in the middle of nowhere, to go to the middle of nowhere,” she says. Educating medical students early about the possibilities a career in family medicine opens up would also help, she says.

Curriculum changes in medical school like MCG’s proposed 3+ Track, which will allow students who commit to primary care to complete medical school in three years and go directly into a primary care residency, then get free tuition or have student loans forgiven if they agree to serve an underserved area for six years, are also a step in the right direction, she says.

“We have got to get primary care doctors out there or we’re going to be in a pickle,” Johnson says. “And if students are going to commit to primary care early, there is so much more they can learn about the field in the later years of medical school. I have learned so much in the last six months about the public health policies and advocacy issues that affect family medicine.”

Having less debt will also help steer medical students into primary care, which can pay significantly less than other specialties. “After medical school, with interest, I’m looking at about $300,000 that I have to pay back,” she says. “That’s really daunting. It’s hard to sign up for that when you know that you could do something, for instance, in the surgical field and make three or four times what a family medicine physician would make.”

But the new physician is not deterred.

After completing residency, Johnson hopes to be able to complete a one-year obstetrics/gynecology fellowship she is working to develop with Denise Kornegay, executive program director of the Georgia Statewide Area Health Education Centers Network, that will allow her and other family medicine physicians to perform cesarean section deliveries – currently they can vaginally deliver normal, healthy pregnancies. It’s a program she hopes will move Georgia from the number 50 spot in the country for infant and maternal mortality rates by providing access to women in underserved areas of the state.

Then it’s back to her roots. Johnson plans to open a family practice in some rural or underserved area of the state. “As a family medicine physician I really feel like I’ll be able to do everything,” she says. “That population is home to me. These are my people.”

Only Doc in Town