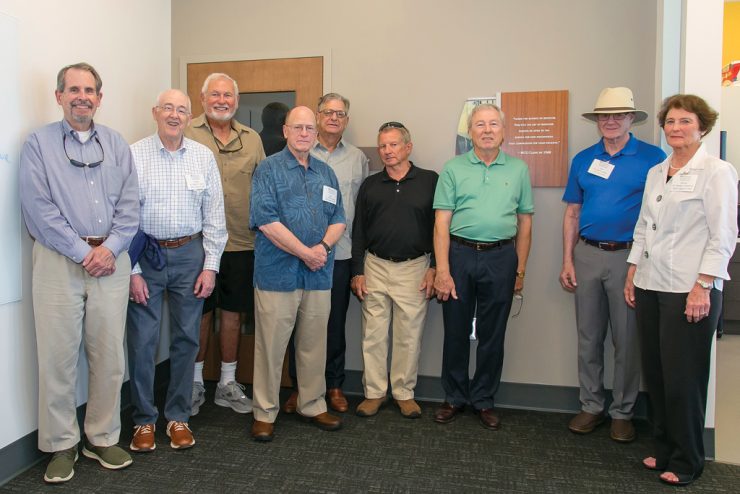 “Learn the science of medicine. Practice the art of medicine. Always be open to the search for new discoveries. Have compassion for your patients.”

It is sage advice from a group of Medical College of Georgia alumni to the next generation. And now, courtesy of the MCG Class of 1968, those words are a daily reminder hanging in their medical school’s academic home.

The Class of 1968 donated $100,000 to name a learning community, apartment-style rooms where students gather to study and even rest, in the J. Harold Harrison, MD, Education Commons. A plaque with those words, written by the class, hangs on the wall of the third-floor room that’s named in their honor.

The idea was hatched in 2013 at the class’s 45th reunion, when ground had barely been broken on the Harrison Commons. The building opened in 2014 and students began taking classes there in 2015.

“There was a real excitement about [the Harrison Commons] being built and we knew it was huge need for the medical school,” says Dr. Sandra Freedman, ‘68. “Dr. (Lloyd) Schnuck, ’68, and I discussed it and decided to ask our class if they’d be interested in doing something special for the school at our 50th reunion. Our class really got behind it.”

Of the nearly 100 students who graduated in 1968, around 80 are still alive. Nearly half of them donated.

This past May, about 25 of those classmates also came back home to their medical school – from places as far as Colorado and Texas – for their 50th reunion and to tour the learning community that bears their class’s name and that advice.

“So many alumni and friends have donated to that building,” says Freedman. “There are the names of alums on so many rooms, even the building itself is named for Dr. Harrison. It’s something they’ll see every day as they’re in that building to train.”

Freedman and her classmates hope those names will instill a sense of philanthropy in medical students early, so one day, when they’re able, they’ll also consider giving back to their medical school.

If you’re interested in making a donation to the Medical College of Georgia, please visit mcgfoundation.org or call Ralph Alee at 706-721-7343.