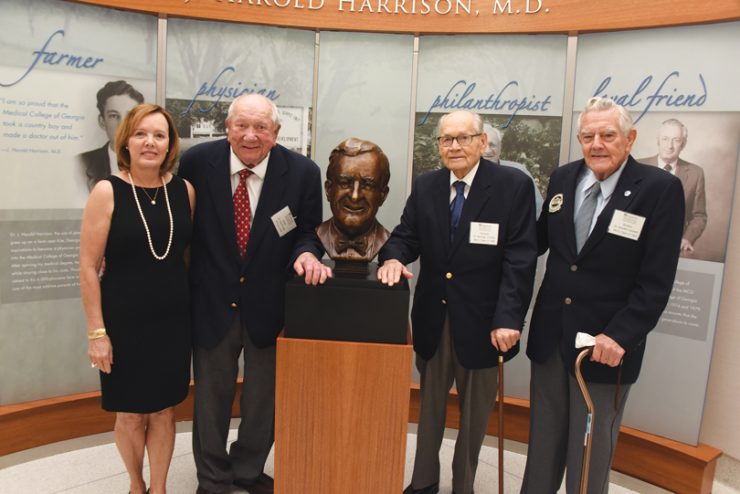 A bronze bust honoring the late Dr. J. Harold Harrison was unveiled in April at Alumni Weekend and now resides in the lobby of the building that carries his name.

The bust was created using the Lost-wax method. The original was sculpted with an oil-based clay. The mold was created using silicone and hydrostone with fiberglass. Then the mold was used to create a wax pattern, which was then edited, cut, gated, sprued and then sent to the dip room, where six to eight layers of ceramic shell slurry were applied over the wax pattern.

The mold was raised to high temperatures so the wax was burned out (becoming the “lost wax”) leaving an empty shell. Then molten bronze was poured into the shell at about 1,750 degrees. Welding, chasing and tooling assembled it into its finished state. Patina was applied, followed by a wax finish for a deep luster shine.

The construction of the J. Harold Harrison, MD, Education Commons, which serves as the academic home of MCG, was made possible in part by a $10 million gift from the 1948 MCG alumnus and his wife, Sue, who was on hand for the unveiling. Also on hand for what would have been Dr. Harrison’s 70th reunion weekend were his classmates, Drs. Bowdre Carswell, Norman Pursley, David Hall and Harold Mims (not pictured).

A Kite, Ga., native, Dr. Harrison came to MCG at the age of 18 and would become a nationally recognized vascular surgeon.  After retiring from a 50-year career, Harrison returned to his rural roots by embarking on a second career as a cattle farmer in Bartow, Georgia.  In addition to providing funding for the building, the Harrisons gave another transformational $66 million gift that has enabled the recruitment and retention of an eventual 10 distinguished physician-researchers at MCG. The endowment has also been used to establish 48 scholarships for medical students.