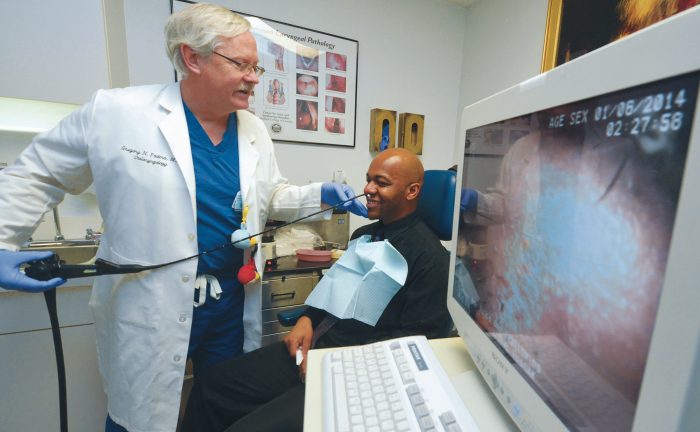 An Eye on the Youngest Patients

Dr. Gregory N. Postma, vice chairman of the Department of Otolaryngology and director of the Center for Voice and Swallowing and Airway, brought advanced airway surgery skills to MCG when he came from Wake Forest University 11 years ago.

When Weinberger joined the faculty in 2011, his desire to exclusively do airway surgery and research meant assuming the role of primary adult airway surgeon, so Postma could also focus on his other loves of voice, swallowing and, increasingly, esophageal troubles.

This summer, Dr. J. Drew Prosser, a 2008 MCG graduate, came back home to expand the airway service to include the most complex pediatric cases. Prosser completed an otolaryngology residency at MCG and AU Health, then a pediatric otolaryngology fellowship at Cincinnati Children’s Hospital, home of the nation’s largest pediatric airway program.

Unprecedented survival rates of premature infants, who can spend months on a ventilator while their immature lungs try to catch up, make scarring resulting from endotracheal tubes the most common reason Prosser sees young airway patients. A 2015 study in the Journal of the American Medical Association looking at 20-year survival trends in premature infants, for example, showed marked increases in survival of preemies born at 23 and 24 weeks as well as in survival without major morbidity for infants born at 25 to 28 weeks.

Much like normal healing in the mouth, scarring may begin rapidly, but its effect may take a while to surface in babies who naturally spend most of their time lying down. Interestingly, lying down can worsen the problem as babies also inevitably spit up and stomach acid further aggravates their tiny tracheas, Prosser says.

Most typically, it is when children begin to crawl and walk that their airway difficulties become apparent. Unlike adults like Anderson, “Children don’t know any different,” Prosser says. They tend to “self regulate,” and it’s their parents who note that Johnny is not as active as his older brother was at that age.

Children also can be born with a narrowed trachea; trauma and inhalation injuries, including burns, also are causes, which intubation can worsen. “There is something about multisystem trauma that releases a bunch of inflammatory mediators so the rate of scarring in the airway is increased from the breathing tube,” he says.

Whatever the cause, young patients tend to do well with balloon dilatation of their narrowed trachea, and local steroid injections help keep narrowing at bay. “I generally think about airway narrowing as like a framework,” Prosser says. “If the cartilage framework is intact, and it’s mostly scar within the cartilage, those kids do great with balloon dilatation and endoscopic techniques.”

When the framework is compromised, experience tells Prosser dilation only delays the inevitable need for an open operation. This includes babies born with small cartilages, in which case he splices in pieces of rib cartilage as an expander. Early injuries to cartilage, in the case of a premature baby who requires ventilation, for example, may mean trachea growth can’t keep up with lung growth outside the womb so may also require Prosser’s reconstruction assistance to enable long-term success.

Because children and their tracheas are growing, breathing tubes developed for children – some the size of cocktail straws – actually help Prosser gauge what size a child’s airway should be. Their tiny thumbs end-to-end are another good approximation.