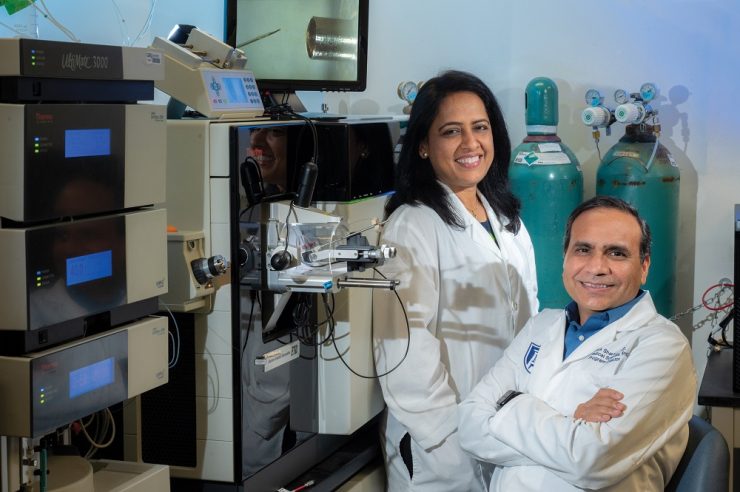 The Eyes Have It

The protective outer layer of our eyes, called the tear film, contains thousands of proteins, which provide clues about wellness and disease, and scientists have fine-tuned what they say is a non-invasive and efficient way to look at those clues.

They anticipate that one day a tear fluid workup could be as routine as bloodwork during a physical exam as well as in diagnosing a myriad of conditions from dry eye disease to Alzheimer’s.

They appear to have cleared a major hurdle to that future, because, while there are a lot of proteins present, getting an adequate volume of tear fluid to analyze them has been technically difficult, say Drs. Ashok and Shruti Sharma, scientists in the MCG Center for Biotechnology and Genomic Medicine and the James and Jean Culver Vision Discovery Institute at Augusta University.

Now they report in the International Journal of Molecular Sciences that the same tissue paper, called a Schirmer strip, already placed painlessly against the eye to measure tear production in patients, can also capture a sufficient volume of tear fluid for a detailed protein analysis.

In this case, they are not talking about collecting the tears that roll down our cheeks when we are upset, because those are diluted and not a good source for biomarkers, they say.

Rather the Schirmer strip is placed on the far corner of the eye, away from the tear ducts, for about five minutes until it gets moist with the tear fluid that covers and protects our eyes. At that point, the paper has collected about 10 to 15 microliters (15 microliters is .00050721 fluid ounces) of tear fluid, far less than a drop, says Ashok Sharma, proteomics and bioinformatics expert and the study’s corresponding author.

Next, they pair the protein saturated paper with the high-throughput, protein analytics of mass spectrometry to get a clear picture of the proteins present.

Now that they have a technique, their goals include developing a database of the proteins of healthy individuals that will be available free to other scientists working to identify outlier proteins that are biomarkers for disease and pursuing their own studies of the biomarkers for the common and uncomfortable dry eye disease.

“The word is noninvasive,” Shruti Sharma, vascular and endothelial biologist and the study’s senior author, says of the tear fluid collection and analysis method they used to identify 3,370 unique proteins, an average of about 678 unique proteins per individual, in the tear fluid of healthy adults. Among the 50 most abundant proteins were several major families of proteins including immunoglobulins, or antibodies, which help protect the eye from infection, and fibrous structural proteins called keratins, which help form a protective covering for the eye.

The method that provided the largest number of proteins and ultimately the most detailed analysis was the “in-strip protein digestion” method in which the Schirmer strip was cut into five pieces that could all fit into a plastic tube for “digestion.” With the other approach, proteins were removed from the strip before “digestion.”

To break up the proteins into peptides, they used two mass spectrometry techniques, including collision-induced dissociation, which uses kinetic energy to prompt a collision with molecules to break the proteins into smaller peptides.

They also used the newer mass spectrometry technique, HCD, or higher energy collision dissociation, which uses a higher level of energy to generate even smaller fragments, so any protein modifications are easier to identify. Disease can modify the protein itself and the number of proteins.

Either way it appeared that it was the protein digestion approach that was most important since there was no significant difference in the number of unique proteins or peptides found by either mass spectrometry technique when this in-strip protein digestion was used with each, the scientists write.

Their findings make the combination of in-strip digestion and HCD the most effective pairing, they say, for future studies of human tear fluid.