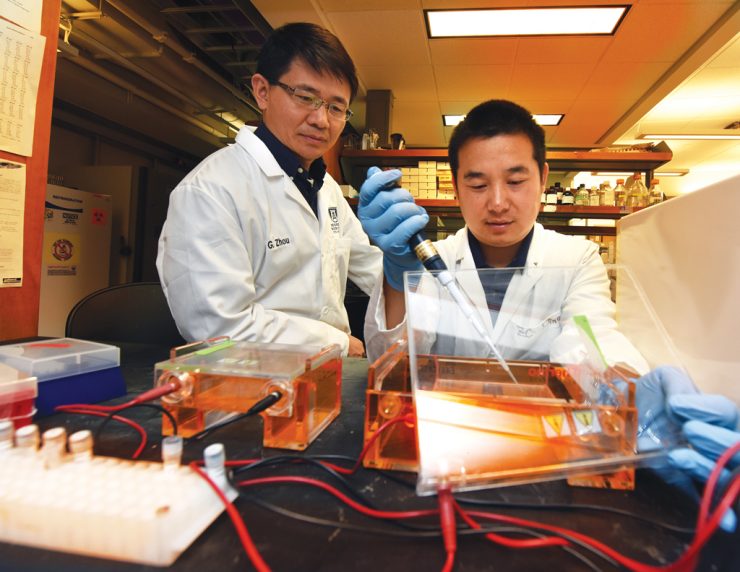 Oxidative stress can help tumors thrive, but one way novel cancer treatments work is by pushing levels to the point where it instead helps tumors die, scientists report.

Adoptive T cell therapy appears to reprogram the metabolism of tumor cells, increasing their level of reactive oxygen species, or ROS, and causing their destruction, says Dr. Gang Zhou, immunologist at the Georgia Cancer Center and Department of Medicine at the Medical College of Georgia.

Scientists treated mice that had large, localized colorectal tumors with adoptive T cell therapy after preconditioning them with a chemotherapy drug known to help with the expansion and persistence of these infused T cells. The T cells are a patient’s own cells, but engineered to better fight cancer.

The therapy appeared to deliver a deadly double-whammy to the cancer cells, says Zhou, corresponding author of the study in the journal Cell Metabolism.

The bottom line of the metabolic changes include, for example, complete tumor regression in nearly all the tested mice.

The scientists found similar effects – higher ROS levels correlated with high tumor cell death – when the therapy was used in models of breast cancer and lymphoma.

Putting the Squeeze on Brain Function

The squeeze high blood pressure puts on fragile blood vessels in the brain appears to disrupt a normal, protective process that balances the blood flowing to our brains with the activity of our resting neurons.

“Untreated hypertension can lead to cognitive impairment but exactly how it happens, we don’t really know,” says Dr. Jessica A. Filosa, neurovascular physiologist in the MCG Department of Physiology.

“We need to understand the window of change or shift in function in all these different cells. What exactly is happening, in what order and how fast?”

Filosa recently received a $1.7 million grant from the National Institutes of Health, which is enabling those pursuits.

In the face of hypertension, as blood flow decreases, neuron-nurturing brain cells called astrocytes may instead tell neurons to increase their activity, says Filosa.

These impairments in the neuro-protective communication between brain blood vessels, astrocytes and neurons may be an early factor in how hypertension impairs cognitive function, she says.

MCG scientists reported in the Journal of Clinical Investigation the first evidence that when activated by chronic offending agents, like obesity and hepatitis, TREM-1, or triggering receptor expressed on myeloid cells-1, contributes to a destructive level of inflammation that results in liver damage and possibly cancer.

The unhealthy transformation can occur in five to 50 years, depending on factors like the level of insult, and may be largely reversible up to the point of cirrhosis, if the offending agent is stopped, and the liver’s natural ability to regenerate takes over.

Dr. Anatolij Horuzsko, reproductive immunologist in the Georgia Cancer Center and MCG Department of Medicine, and his colleagues think TREM-1 could one day be another point of intervention, possibly with a drug that could return TREM-1 activation to normal levels on resident, garbage-eating, watchdog immune cells called Kupffer cells.

They already are doing experiments with a drug that, because of its structure, should enable tamping down of TREM-1, but long-term goals include a drug that would target this receptor on Kupffer cells.

Severe pneumonia causes a buildup of fluid in the lungs that makes the basics of breathing and getting oxygen out to the body difficult to impossible.

Scientists are exploring a new target for treating both barrier leakiness and fluid buildup that, in lab animals and early human trials, seems to restore tight barriers and fluid clearance so we can breathe.

They have a synthetic version of the tip of a molecule known to target cancer that appears to directly activate ENaC-alpha. Limited clinical experience with the peptide indicates that the sicker the patient, the better it works.

A new $2.5 million grant from the National Heart, Lung and Blood Institute is enabling more laboratory studies to learn more about just how targeting ENaC-alpha may improve survival from this top 10 killer of both young and older individuals.

They found that a group of large, triangular-shaped neurons, in two almond-shaped structures on either side of our brain, form cliques that help us enjoy the total food experience, from recognizing a banana to anticipating its taste and texture, placing it correctly in the category of food and maybe even the subcategory of a breakfast food.

But when that prewired neural circuitry doesn’t work well, we may have an eating disorder that prompts us to compulsively eat or conversely, to not eat.

Dr. Joe Z. Tsien, neuroscientist in the MCG Department of Neuroscience and Regenerative Medicine and Georgia Research Alliance Eminent Scholar in Cognitive and Systems Neurobiology, is corresponding author of the study in the journal Neurobiology of Learning and Memory.

In addition to better understanding how our brains process food, the scientists believe their work may one day provide insight into difficult-to-treat eating disorders.

In a published study, investigators found large colonies of bacteria breeding in the patients’ small intestines, and high levels of D-lactic acid being produced by the bacteria lactobacillus’ fermentation of sugars in their food, says Dr. Satish S.C. Rao, director of neurogastroenterology/motility and the MCG Digestive Health Clinical Research Center.

D-lactic acid is known to be temporarily toxic to brain cells, interfering with cognition, thinking and sense of time. They found some patients had two to three times the normal amount of D-lactic acid in their blood. Some said their brain fogginess – which lasted from a half hour to many hours after eating – was so severe that they had to quit their jobs.

The report in the journal Clinical and Translational Gastroenterology appears to be the first time the connection has been made between brain fogginess, bacterial overgrowth in the small intestine, high levels of D-lactic acid in the gut and probiotic use, Rao says.

“Probiotics should be treated as a drug, not as a food supplement,” Rao says, noting that many individuals self-prescribe the live bacteria, which are considered good for digestion and overall health.

With age, expression of a small molecule that can silence others goes way up while a key signaling molecule that helps stem cells make healthy bone goes down, scientists report.

They have the first evidence in both mouse and human mesenchymal stem cells that this unhealthy shift happens, and that correcting it can result in healthier bone formation.

The small molecule is microRNA-141-3p and the signaling molecule is stromal-cell derived factor, or SDF-1, they report in the Journal of Gerontology: Biological Sciences.

“If you are 20 years old and making great bone, you would still have microRNA-141-3p in your mesenchymal stem cells. But when you are 81 and making weaker bone, you have a lot more of it,” says Dr. Sadanand Fulzele, bone biologist in the MCG Department of Orthopaedic Surgery.

Restoring a more youthful balance could be a novel strategy for reducing age-associated problems like osteoporosis and the impaired ability to heal bone breaks, says Fulzele, a corresponding author on the study.

Turn Back Time In Kidney Inflammation

Using a manmade version of a human antibody to directly deliver a drug that inhibits a powerful driver of inflammation can reverse a disease course that often leads to kidney failure and dialysis, investigators report.

Dr. Michael P. Madaio, nephrologist and chair of the MCG Department of Medicine, is corresponding author of the study in the journal Kidney International.

He and his team additionally found that it’s the powerhouses of kidney cells, called mitochondria, that are particularly impacted by the acute or chronic inflammation called nephritis, and that, at least in their animal model and cell cultures, the treatment — a single dose of the protein kinase C-alpha inhibitor — restores their function.

Dr. Jennifer C. Sullivan, pharmacologist and physiologist in the MCG Department of Physiology, has been honored by the American Journal of Hypertension and the American Heart Association’s Council on Hypertension.

Sullivan, whose research pursuits include understanding gender differences in hypertension, has been selected for the inaugural John Laragh Research Award from the American Journal of Hypertension. The new annual award honors an exemplary basic, clinical, translational, epidemiology, population science or health systems investigator under age 45. Awardees are invited to submit a paper reviewing their work to the journal.

Sullivan also has been selected for the Mid-Career Award for Research Excellence from the AHA Council on Hypertension. The award recognizes an investigator active in hypertension or cardiovascular research who has made significant contributions to these fields.

Sullivan was honored at the September Joint Hypertension 2018 Scientific Sessions in Chicago.

The $40,000 award is endowed by William Porter “Billy” Payne and his wife, Martha, to a graduating Augusta University student who exemplifies caring and compassion in health care.

During his time at the university, Rivera-Bloodworth participated in MCG’s Family Medicine Clerkship and helped develop the college’s Complementary and Alternative Medicine Curriculum.

He also worked to close the health disparity gap among Augusta’s minorities by conducting a social media campaign shedding light on health resources available for the LGBTQ community, and he provided care to uninsured Hispanics in the free Clinica Latina. He also served as vice president and board member of the CSRA’s Asociación Latina de Servicios, a free clinic for Latino patients.

During this time, Rivera-Bloodworth was also pursuing a master’s in Theological Studies at the Church Divinity School of the Pacific and studying Traditional Chinese Medicine, combining his interests in religion and medicine.

Bloodworth is now a family medicine resident at the University of Rochester in New York.