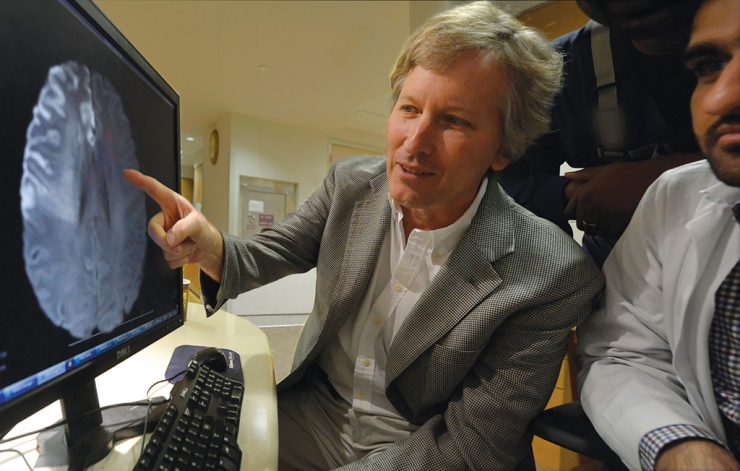 Sometimes, when I am thinking about where the Medical College of Georgia needs to be – and how to get it there – I think about where it has been. MCG is 190 years old this December, so there is clearly much to think about.

Can you imagine the first concepts of MCG formulating in the minds of brave, exacting individuals like Dr. Milton Antony? Did he and our other founding fathers think that these many years later what they had conceived would stand today among the nation’s oldest medical schools? Did they think that Georgia’s public medical school would have one of the largest classes in the country, yet still need to do more for a state that has one of the largest populations and growth rates? Did they think that MCG, born in Augusta, would today be living across Georgia, with students and faculty and campuses that really do make the phrase, Georgia is Our Campus, ring true?

It’s overwhelming and neat at the same time to think about where we have been and where we must go in the next 190 years – or at least the next decade. Part of that includes growing our class size to help better meet the physician needs of our state and nation. Over this past year, in concert with the leadership of Augusta University and the University System of Georgia, we have developed a strategy that will increase our freshman class size from 230 students to 260 by the fall of 2024. That will include growth both in Augusta and at our second four-year campus in Athens in partnership with the University of Georgia.

We plan to have a class size of 300 by 2028. That would make our freshman class, as the Association of American Medical Colleges counts today, the country’s fourth largest. Indiana University School of Medicine, which currently has 365 freshman, is the largest. For perspective, Georgia is currently ranked eighth in the nation in population – Indiana is 17th – and sixth in population growth. So we definitely need to get moving on this front, in addition to further expanding Georgia-based resident education programs. Let me note again here that the USG-led GREAT Committee – with the help of many of our hospital and physician partners across Georgia – has nearly doubled the number of teaching hospitals and GME training capacity in our state in the past handful of years. But more is still needed.

It now includes people like Dr. Doug Miller, a familiar name to most of you because he has served as MCG’s dean. Dr. Miller is brilliant, articulate, insightful and hard to forget. Circumstances elsewhere brought him back to our faculty in January, close to the time that circumstances here led to creation of the position of senior associate dean for medical education as our top job in academics. You know you have made a good hiring decision when you see an individual like Dr. Miller and the people around him thriving.

The decision to develop that new position was made in concert with creation of the position of MCG’s first executive vice dean, who effectively functions as second in command for the medical school. Dr. W. Vaughn McCall, who also chairs the Department of Psychiatry and Health Behavior, also was just a perfect fit for this job because he is accomplished in every aspect of what we do here – taking care of patients, education and research. He also has a mentoring and nationally known spirit that made him a great choice.

As we were sending this magazine to the designer, we were announcing the selection of our new Department of Neurosurgery Chair Dr. Fernando L. Vale, who has served for a decade as vice chair of the Department of Neurosurgery and Brain Repair at the University of South Florida Morsani College of Medicine. Dr. Vale is an established expert in functional and epilepsy neurosurgery, an examiner in his specialty for the American Board of Neurological Surgeons and director of USF’s neurosurgery residency program. He is a longtime member of the Executive Committee and a former president of the Southern Neurosurgical Society. He is also a longtime chief of the Department of Neurosurgery for Tampa General Hospital, a large teaching hospital for USF, and so understands the relationships with affiliate physicians and hospitals that have been essential to MCG’s expanding presence across Georgia.

Community relationships will become even more important as we also explore partnerships for MCG’s health system that are necessary as well to the continued success of the medical school and to the diverse interests and needs of our faculty, students and residents. That makes individuals like Dr. Vale, who already appreciate the importance of partnership, even more valuable.

There will be more to come on each of these new leaders as we go forward, but let me say here that while each is distinctive, they have in common significant professional accomplishment, a collaborative spirit and a desire for MCG to more fully realize its potential. More to come as well after the holidays on other key searches for chairs of Physiology, Neuroscience, Medicine and Neurology, as well as the new Georgia Cancer Center director.

But please let me share with you now that I am excited about the MCG we are building and I appreciate your essential support as we get there.

From the President: Winter 2019