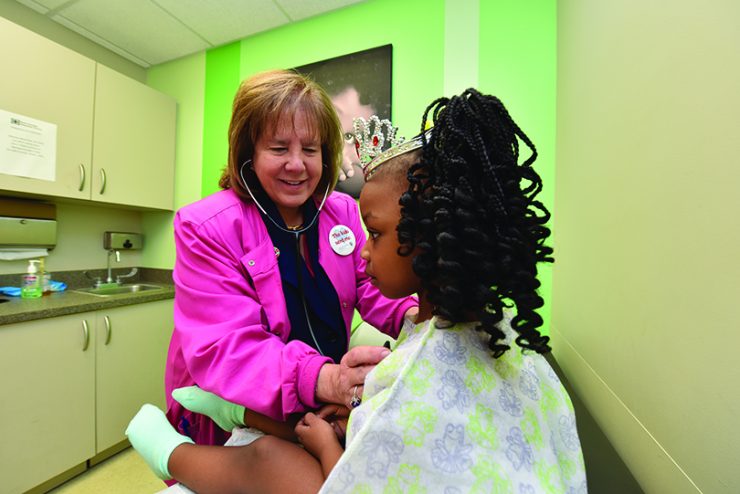 Set In Her Sights

Gun violence. The E-cigarette epidemic. Vaccine hesitancy. Uninsured children.
Instead, it’s some of the top targets in the sights of the 67,000 member strong American Academy of Pediatrics. Leading the charge will be Dr. Sally Goza, a Fayetteville, Georgia pediatrician, 1984 Medical College of Georgia graduate, and, as of January 1, the president of the country’s largest organization of pediatricians.

“Pediatricians, pediatric subspecialists and surgical subspecialists are truly a force to be reckoned with when they speak and tweet with one voice,” Goza said in announcing her candidacy for president last year. “We have the facts and the stories to tell to make a difference. We have the data, we have the road map.”

Goza heading the AAP is only a little ironic – not because of any lack of experience – but because of how she got involved in the first place.

“I had a partner, (pediatric endocrinologist) Dr. Quentin Van Meter, who decided that I needed to be involved in the Georgia Chapter,” she remembers. “They needed a representative from this area of the state, so he put my name on the ballot and forgot to tell me. I was rounding at the hospital and a colleague said ‘I voted for you today’ and my response was ‘Thanks! For what?’”

That was just the beginning. She dove head first into committee work and rose through the ranks, serving as president of the Georgia Chapter, then serving as the representative for District X (Georgia, Florida, Alabama and Puerto Rico) at the national organization. She rotated off the group’s executive board in 2017 and announced her candidacy for president in 2018. She was elected by her colleagues across the country in December of that year.

It is an honor she says she does not take lightly. “It is truly a calling to have the privilege to care and advocate for the world’s most valuable resource – our children,” she says. “Pediatricians always have advocacy as part of their DNA.”

That advocacy will have Goza and her colleagues staring down the face of some tough issues – tough to understand and harder to solve.

On their list are issues like the number of uninsured children, which is rising for the first time in two decades, meaning more children don’t have access to basic care. “We don’t really know why, but believe it is due to barriers to enrollment. Also many families who are eligible are afraid to apply for assistance because they are afraid it could affect their immigration status.”

Also on the list? Gun violence prevention and trying to get the government to fund research, “because if we don’t have data and don’t know what’s causing this epidemic then we will never be able to come up with good solutions,” Goza says. She likens it to the government funding research in the 1970s that gave the country guidelines for the use of car seats and seat belts. “If we don’t get the research we will never figure it out. We want to do what’s right for children. We want to save children. We want to make it so our children are not afraid to go to school.”

Another key issue is the E-cigarette epidemic. In 2018, 3.6 million teens reported current E-cigarette use, according to the Centers for Disease Control and Prevention. These battery-operated devices allow people to inhale an aerosol, which typically contains nicotine (though not always), flavorings and other chemicals. As of October, they had been deemed responsible for 34 deaths in 24 states, according to the CDC. The Academy has sued the US Food and Drug Administration over E-cigarettes and won — for no oversight before releasing the product and allowing them to market toward children. “People are coming on board and agreeing that they shouldn’t be allowed to sell the flavors and such, but the problem is that we have a whole new generation of teens addicted to nicotine and they’re addicted at high doses,” Goza says. “We do not have an effective way to help young people stop vaping. It is imperative that we find a way to prevent our teens from initiating E-cigs.”

And always on the list is the longstanding issue of vaccine hesitancy.

Over the past decade more and more people have begun to question the benefit and safety of vaccines, many request alternative vaccination schedules and more are postponing and even declining vaccinations. But Goza is hopeful that is finally beginning to change.

“We’ve got to do something about all of the misinformation out there,” she says. “We’ve been able to work with Pinterest, Google and Facebook so when you search ‘vaccination,’ the credible information comes up first. That is a miracle.” She notes there are plans for a larger public awareness campaign with help from a bill proposed by the first pediatrician ever elected to Congress, Dr. Kimberly Schrier (D-WA).

Other issues the academy is watching include the effects of toxic stress from things like physical or emotional abuse, chronic neglect, or even the accumulated burdens of family economic hardship on early brain development; deciding how much screen time is too much; the separation of children from their parents at our southern borders; and diversity and inclusion in medicine.

“Children have to see themselves in your profession, they have to see that they can be a doctor,” Goza says, recalling a time she was told her lobby looked like the lobby of the United Nations. She took it as a compliment and to this day wears a lapel pin that represents the United Nations sustainable developmental goals program.

The other pin she often wears – admittedly her favorite advocacy pin – says “The children sent me.”

“Children are our North Star,” she says. “If no one advocates for them, if we’re not at the table for them, they’re going to be on the menu.”

Goza always idolized her aunt and uncle, Emory School of Medicine graduates Drs. Helen and Ferrol Sams. They were family medicine physicians who deeply cared for their then-small, mostly rural community of Fayetteville and even made house calls. They eventually opened up the area’s first multi-specialty clinic, which was where Goza returned to practice after residency. It was founded on five guiding principles:

They are the same rules that Goza operates her practice by today – even having T-shirts printed with the mantra for employees to wear. “Those rules work for medicine in general, but for pediatrics especially,” she says. “They also encompass the very things the Academy believes in.”

Goza came to MCG in 1980, set on a career in hematology/oncology in the hopes of curing the leukemia that had recently taken the life of her young uncle, but as medical school progressed she fell in love with pediatrics. After graduating from MCG she completed her residency at Cincinnati Children’s Hospital in 1987.

She has been involved with the AAP Georgia Chapter for over 20 years, including serving on the Board of Directors and Medicaid Task Force. She currently is on the legislative committee, the fall planning group and the Board of the Pediatric Foundation of Georgia.

Goza was on the AAP National Nominating Committee and while she was on the board of directors, she was chair of oversight committees for practice, marketing/sales, strategic planning and finance. She was selected by her colleagues as the first at-large representative to the executive committee. She was the chair of the For Our Future Campaign Steering Committee.

Dr. Goza is active in her community having served on the boards for Girl Scouts, Promise Place, which serves victims of domestic violence and their children, and the Joseph Sams School, which serves children with special needs.