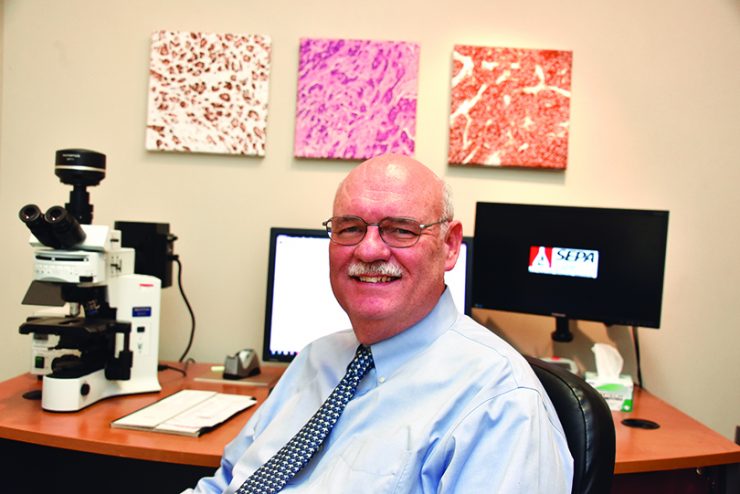 Dr. Patrick Godbey likens his work to being the ultimate detective – his time in the lab spent searching for clues about what ails his patients among their tissue samples and blood.

It does wake him up at night. “Were those stains adequate? Was that really necrosis?” he finds himself wondering. “I want to know about the patient with the unusual antibody whose transfusion I authorized. When I get a complicated case, I’m going to take that slide and show it to every one (of my colleagues) for input, but at the end of the day, it’s my signature on the pathology report.”

It’s not the work he necessarily envisioned he’d be doing when he graduated from and completed his first residency — in obstetrics and gynecology — at MCG, then moved to Brunswick to practice.

But now, Godbey, the founder of Southeastern Pathology Associates, one of the country’s largest pathology labs, says it’s the work he was always meant to do.

His colleagues across the country agree.

Godbey was inaugurated as the 36th president of the College of American Pathologists in September, a position he was voted into by his peers. The college is the world’s largest organization of board-certified pathologists and the leading provider of laboratory accreditation and proficiency testing programs worldwide.

Making a place
Godbey’s love of the lab probably began while he was finishing his obstetrics and gynecology residency at MCG when he was studying for his board exam, he reasons. “There was a written exam and, later, an oral exam. For the first part of the oral exam you walked into a hotel room, there was a microscope with 10 glass slides and you had to identify what was on those slides. To get ready for that, I took a two-month rotation through the pathology lab at MCG and I loved it. When I left, the faculty came to me and said, ‘If you ever want to come back, call us and we’ll make a place for you.’”

Newly board-certified and new to Brunswick, Georgia, Godbey had joined a thriving obstetrics and gynecology practice in his newly adopted hometown in 1983.

But he kept thinking about the lab.

“When I would send a specimen to the lab, I would go down to look at it with the pathologist,” he says of the cervical biopsies and other procedures he routinely performed. Five years into practice and by then a new dad unable to spend the time he wanted with his daughter, Godbey decided the time had come to make the call the pathology faculty at MCG had offered years before.

He came back to MCG on April 1, 1988 to start a four-year anatomic/clinical pathology residency – with a year’s credit from the American Board of Pathology for the time he’d already spent in practice. He officially finished his second residency on April Fool’s Day in 1992, and that is the day SEPA Labs was born.

The company was born in an 1,800 square foot building with just six employees. The ACER computer that still sits in the corner of his office today was the company’s entire IT infra-structure.

Today, the company provides the pathology services to the patients in 29 hospitals and surgical facilities in Georgia, Florida and South Carolina as well as numerous physicians’ offices. The company’s headquarters remain in Brunswick.

SEPA’s physicians, many MCG graduates among them, work as lab directors at hospitals, run hospital blood banks and cover autopsy services, among other things. SEPA has other MCG connections too. Among them is Dr. Mark Hanly, who was completing a gynecological pathology/surgical pathology/infectious disease fellowship at MCG while Godbey was in his pathology residency and who would become his longtime friend and later his business partner at SEPA.

SEPA has a unified sum and substance, Godbey says — providing the best pathology services and ultimately improving the care of patients.

The same bottom line
His company’s bottom line is identical to the professional organization he now leads.

“The whole idea of the College of American Pathologists is to make us the best pathologists that we can be so that we can deliver the best care to our patients,” Godbey says. “CAP offers the highest level of accreditation. We strive to make laboratories better all over the world. I personally have visited and inspected many labs including those in Riyadh, Saudi Arabia, Singapore and Buford, South Carolina. We use the same, standardized checklist every time. If I get a report from a CAP accredited lab in India, I know that they’re subject to the same standards.”
Godbey’s involvement with the College actually began when he was a resident at MCG. “Dr. (Robert) Baisden, Dr. (Kailash) Sharma and Dr. (Raghunatha) Rao got me involved doing inspections.

They made sure the MCG lab would stand up to CAP accreditation standards, while teaching us a great deal in the process,” he says.

Over the last 30 years he has held various leadership roles in the group that also represents the interests of pathologists through advocacy and education. He has served on a variety of the college’s committees, most recently chairing the Council of Government and Professional Affairs and the Finance Committee. He also served on the Board of Governors from 2011-17.

As president, Godbey plans to continue his advocacy work – on behalf of patients and pathologists. “I am proud to have the opportunity to represent the profession of pathology,” Godbey says of his new role. “Pathologists and the laboratories we direct are the foundation of medicine. More and more decisions about not just diagnosis, but courses of treatment are being made in the lab.

When I was in medical school, we couldn’t even measure serum hCG levels in pregnancy. So much has changed. It’s an incredible time to be in this profession.”

Godbey is founder, CEO and Laboratory Director of Southeastern Pathology Associates in Brunswick. He is board certified in Anatomic and Clinical Pathology as well as Obstetrics and Gynecology.

He also serves as laboratory director and chair of the Department of Pathology for Southeast Georgia Health System in Brunswick.

He is a clinical faculty member at MCG and at the College of Coastal Georgia.

Set In Her Sights