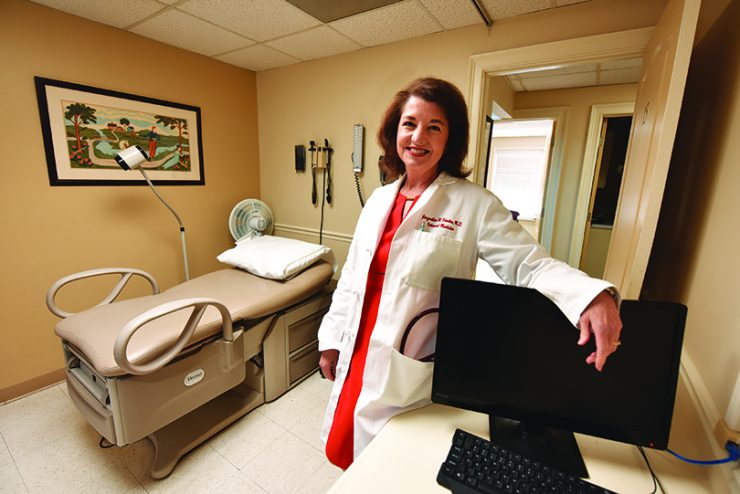 Dr. Jacqueline W. Fincher, a 1985 MCG graduate, is preparing to take the helm of the world’s largest physician specialty group as president of the American College of Physicians in April 2020.

She turned down a full scholarship to medical school that committed her to practice in a rural area of the state, but she couldn’t turn down her husband.

Anywhere turned out to be Lemley’s hometown of Thomson, Georgia. Lemley, a family medicine physician, returned home in 1988 to join his dad’s practice and he brought his internist wife with him.

The largely rural small town, with a population of around 7,000 and where nearly 20 percent of the population lives in poverty wasn’t exactly where the city girl and native of Atlanta had thought she’d end up.

But nearly 32 years later, it is “her community.”

It’s where Fincher, along with her husband, has built one of the area’s largest primary care practices. And where she knows her patients and sees them “at football games on Friday nights, at Walmart on Saturdays and church on Sundays.”

It’s the place they raised their daughter, Dr. Laura Lemley, a 2017 MCG graduate in her last year of a pediatrics residency at the University of North Carolina at Chapel Hill.

It’s the community that rallied around Fincher when she was diagnosed with an aggressive form of breast cancer when Laura was just 11 months old.

It’s the community where she learned to lead, starting a support group for women who were also living with breast cancer; establishing one of the country’s most successful American Cancer Society Relay for Life events for towns similar in size; working with the American Heart Association on state and national boards; and joining the inaugural class of the chamber of commerce’s Leadership McDuffie program.

“There is such a great need for leadership in every community and for people who are willing to step up and into those roles,” she reasons. “It’s so easy because it’s simply getting involved in something you’re passionate about and taking ownership.”

She just kept showing up

Fincher’s involvement with the American College of Physicians began almost as soon as her career did. Soon after she started practicing at McDuffie Medical Associates, a letter arrived from the 159,000 member strong professional organization for internists.

“It said ‘…You’re now eligible to be a full member of the American College of Physicians. Our chapter meeting is in October and we want you to come.” Thinking the organization had invited her personally, Fincher resolved to go. “And that’s how all of this began,” she says.

She started going to state meetings and then the national meeting was held in Atlanta in 1995. Fincher was amazed….and hooked. “To be with 5,000 other internal medicine physicians, some of the best teachers from around the country at that time, it was inspiring,” she remembers. “After that I just kept showing up and speaking up at the Georgia Chapter meetings and participating in committees and in the annual education program. I’m not really a shy person as many people in Thomson have told me.”

For the woman who’d decided at seven-years-old to be a physician like her OB/GYN father, and the “oldest and bossiest” of three children, leadership came natural. And it wasn’t long before Fincher was leading the Georgia ACP Chapter as governor — a five-year commitment that saw her representing the state’s more than 3,000 internists at the national level. “That was really one of the pinnacles of my career because it connected me with my colleagues in a special way and allowed me to understand how different practices, from the big to small like ours, to those in big health care centers, to those in academic medical centers operated differently, but also faced some of the same issues.”

She also found herself on two of the ACP’s major national policy committees, the Health and Public Policy Committee and the Medical Practice and Quality Committee, the latter dealing with what she calls “the daily practice of medicine.” What are the issues facing internal medicine practices? How do physicians get paid? What are the current quality and performance measures and why?

How are Medicare, Medicaid and other insurance regulations impacting physicians’ ability to care for their patients?

That work eventually led to Fincher’s election to the organization’s Board of Regents, which approves any new policies that come out of the ACP. Four years later, she was elected a national officer.

“The ACP has truly been my professional home for 31 years,” she says. “I think a lot of our students, residents and early career physicians are so busy trying to start their careers and their families that they don’t necessarily see the importance of being part of their professional organization. I think it’s critical. There is no way we could have been successful in private practice without being part of our professional organizations. They have helped guide us over the past 30 years.”

A guiding force
Fincher says guidance from the ACP and the American Academy of Family Physicians, of which Lemley and the practice’s other family medicine physicians are members, has literally kept their practice afloat.

“Jamie and I have seen, in our 31 years of practice, the dramatic transformation of medicine,” she says. “It has been difficult, but would have been even more difficult to move through the last 30-plus years without being connected, particularly in a rural practice. We could have gone out of business, literally.”

For instance, gone are the days when Dr. Jamie Lemley’s father, Dr. John Lemley, who started his practice in 1961, kept his patient notes on a 5×7 index card, with only a diagnosis and treatment written down and the billing charges on the right margins. One of the biggest changes in health care over the last decade has been the adoption of the electronic medical record. Fincher and Lemley’s practice — now the Center for Primary Care — McDuffie Medical — was an early adopter of EMRs, implementing them in 2006, 10 years before they were required by federal mandate.

“We just saw the electronic future coming to the practice of medicine through connections at the ACP and knew we needed to get on board.”

The organization has also been a resource to help the small five-physician office figure out how to modify workflows, reduce the burden of administrative work and understand the complexities of billing for their services.

“We have the most complex documentation requirements and billing issues of any country in the world,” Fincher notes. “It’s more hoops for physicians to jump through and represents numerous barriers to care.”

In fact, one of the ACP’s largest initiatives, which Fincher has helped work on, is its Patients Before Paperwork, which aims to reinvigorate patient-physician relationships by reducing the administrative complexities and eliminating non-essential tasks that detract from patient care and contribute to physician burnout. “Our goal is to decrease administrative burdens and documentation requirements so that our time with patients is actually time spent with them. That’s why we all went into medicine. The computer needs to be a tool that helps us take better care of our patients, not a billing invoice.”

But it’s those general internists who contribute most to the comprehensive care of patients, she notes. “We all want our parents and our family members to have a great internist or family physician caring for and coordinating their often medically complex health care. But the system of payment has not acknowledged that these primary care physicians are the very ones that tremendously decrease the downstream costs of care for patients and the health care system as a whole. In the value-based payment system we are headed toward, with clinical team-based care, general internists should be appropriately reimbursed from the savings they bring to the whole system.”

General internists, family medicine physicians and pediatricians are some of the lowest paid specialties, compared to subspecialists. “If that payment paradigm was flipped upside down, and administrative burdens reduced, we would have no shortage of primary care physicians,” Fincher says. “It should be a top priority for the country and certainly for the state of Georgia.”

Research has shown that the number of primary care physicians per 100,000 population dramatically impacts the costs of, and ultimately access to, health care. Essentially, more primary care physicians helping keep conditions like high blood pressure and diabetes under control means less need for more expensive specialty procedures, which can often be a barrier to care and drive up health care costs for everyone.

Georgia needs all the help it can get. The state ranks 42nd in primary care physicians per capita, 47th in the number of uninsured, at the very bottom —50th — in maternal mortality.

“Those are the types of health issues I remain concerned about, being from Georgia and wanting us to do better,” Fincher says. “There are lots of things we can do at a national level and the local level to make health care better for our patients, for our fellow physicians and ultimately for our economy, too. As the daughter, wife and mother of primary care physicians from Georgia, and now incoming president of the ACP, I’m certainly trying to make a difference.”

Fincher originally matched with MCG’s Neurology Residency Program, which required a year of medicine training before getting into specialty work. During that year, she found that she loved the variety offered by internal medicine. Finding herself at an impasse, she requested the time to spend two consecutive two-month periods in medicine and neurology, respectively. At the end of that time, her choice was clear. She told a very disappointed Department of Neurology about her decision by November of her intern year, so there would be time to open her slot for the Match the following March. Her spot eventually went to one Dr. David Hess, now MCG Dean.

She got her start in community work through being introduced to Pinkie Knox, otherwise known as “Mrs. Thomson,” who approached Fincher and Lemley as they worked in the yard at the home they’d bought when they’d just moved to town. She asked Fincher to serve as medical adviser to the American Heart Association chapter. That was just the beginning. Fincher eventually went on to be a regional, state and then national representative, serving as president of the Georgia Chapter and on the national board of directors.

She also led a breast cancer survivors support group in McDuffie County for 12 years, which led to her being asked to start the area’s first American Cancer Society Relay for Life event. They had hoped to raise $10,000 for the first race and ended up raising $50,000.