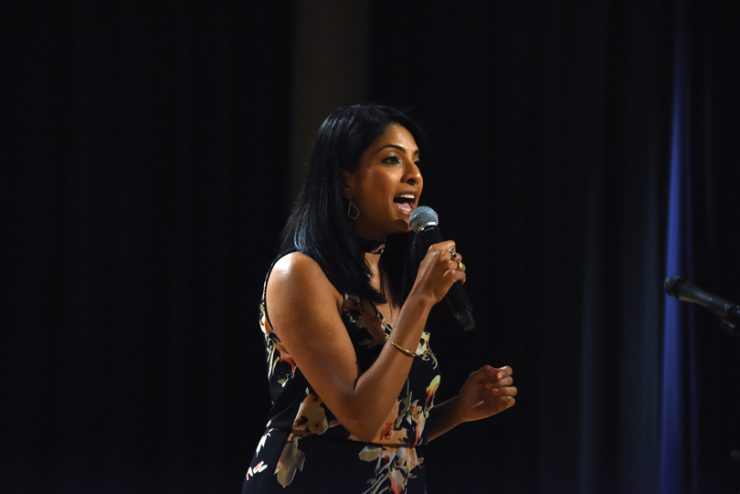 COPE with Cancer, a student organization designed to increase oral health awareness among the general public, has released its
second video. The video focuses on prioritizing oral health before, during and after cancer treatment. Community Oral Health Promotion and Education program was asked to use the video as part of its oral health education program offered throughout the state. Zach Dubin, Nadia Heidari, Varun Iyer, Dahlia Levine and Diana Tran produced the video while completing their senior year of school. To see the video, visit https://www.youtube.com/watch?v=GdST3XeHqrI

A record turnout of almost 200 prospective students attended the 19th annual Impressions Program on March 3 to learn more about the dental profession. The event, sponsored by the Student National Dental Association, included information about dental school intended to help potential DCG applicants actualize their dream of becoming a dentist. The prospective students came from 22 universities, colleges and high schools in Georgia and South Carolina. Dr. Colin Rice, a U.S. Army dentist at Fort Gordon, was the guest speaker. A panel of dentists along with Dr. Carole Hanes, Dr. Regina Messer and Stephanie Perry counseled participants on preparing for the Dental Admission Test, getting accepted to dental school and adjusting to its rigors. Participants also made souvenir stone models of their thumbs using dental impression material. Other hands-on activities included head and neck exams, cavity preparations and waxing exercises. Says Myra Morris, an executive officer of The DCG chapter of the SNDA, “There is no doubt: SNDA is excited about next year and the opportunity to make impressions even bigger
and better!”

The DCG launched a video holiday greeting this year featuring musically talented dental students. Students were chosen to produce the greeting after submitting a brief audition video performing a holiday classic. Those selected to be featured on the video were Ben Alverson, Komlan Medeousso, Luke Robert and Luke Thompson, all members of the Class of 2020, and Kurt Hofius (’19) on piano. Even while studying for final exams, they squeezed in time to record their rendition of “Let it Snow” (https://www.youtube.com/watch?v=C0NQPzxzGMg&feature=youtu.be).

Rhonda Banks, formerly director of annual giving at Augusta University, has succeeded Dale Crail to oversee development efforts for the DCG. Crail, who held the position for approximately 20 years, retired this spring. Banks joined AU in 2011, overseeing alumni relations and annual giving before being named director of annual giving in 2015. She earned a bachelor’s degree in administration from AU and a master’s degree in business administration from Georgia Southern University. She received AU’s Young Alumna Award in 2008 and the 2009 Young Professionals of Augusta Board Member of the Year Award.

Dr. Carole Hanes, Associate Dean of Students, Admissions and Alumni, oversaw a special presentation recently for two future dental students. Vlad Cobzaru and Lara Way, who were among 708 applicants for DCG’s 96 first-year slots, were officially accepted on Dec. 1. Cobzaru, who is from Lasi, Romania, recently completed his senior year at Augusta University as a forward on the men’s basketball team. Way, a native of Martinez, Georgia, recently completed her senior year at AU as a member of the cross country and track and field teams. They are the first student athletes from Augusta University to complete their athletic eligibility and be accepted to dental school.

Alex Howell (’19) has been elected vice president of the American Student Dental Association for 2018–19. She continues to represent the DCG while serving almost 24,000 dental students nationwide. Says Dean Carol Lefebvre, “With her leadership growth and passion for dental academia, Alex is an asset to not only the national dental student community but even more importantly, she is an incredible asset to our dental school. She makes us all very proud and does a tremendous job representing our outstanding student body.”

Dr. Eladio DeLeon has been named the orthodontic commissioner to the Commission on Dental Accreditation by the American Association of Orthodontists. His four-year term begins in fall 2019. The selection letter of DeLeon, who chairs the DCG Department of Orthodontics, cited his unique qualifications based on his years of American Board of Orthodontics consulting and examiner experience, as well as his many years as an educator.

Five DCG alumni and one faculty member have been inducted into the International College of Dentists. Fellowship is extended by invitation only. Nominees must pass a rigorous peer-review process leading to the recognition of “outstanding professional achievement, meritorious service and dedication to the continued progress of dentistry for the benefit of humankind.” The newly inducted fellows are Drs. Rico Short (’99), Victor van Greuningen (‘02), Kevin Frazier (faculty), Ryan Vaughn(’07), Kristina (Mohme) Dawson (’12) and David Settel (’07). DCG General Practice Residency alumni inducted into the ICD were Drs. Andrea Company (’10) and Misha Ghazarian (’12). Settel also completed his GPR advanced training at DCG in 2008.

Dr. Frank Tay, chairman of the Department of Endodontics, has been named a Chang Jiang Scholar, China’s most prestigious scholarly honor, in recognition of his research achievements in the mechanism of collagen intrafibrillar mineralization. The award is granted by the Chinese Ministry of Education to acknowledge special contributions made by Chinese scientists and international scholars in various research fields.

Drs. Andrew Hamilton, Jane Martone and Mike Pruett have been inducted as fellows of the American College of Dentists. Fellowship is intended to elevate the standards of dentistry, encourage graduate study, honor meritorious work and provide community role models. Fellowship reinforces the highest ideals of dentistry.

Minding Your Own Business