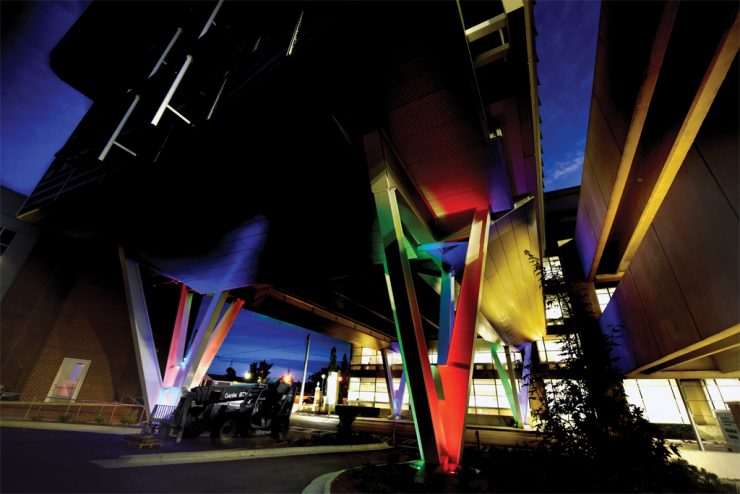 The first thing Scott Thorp did when he was named associate vice president for interdisciplinary research was to reach out to his colleagues at other research universities and find out what constituted “normal” for the position. He discovered that other universities didn’t really have research suites for the general population.

“Normally, what happens when they talk about interdisciplinary research and things like that — they talk about it within one discipline,” Thorp says. “Rarely if ever is there an initiative that goes across the university. That’s one of the things I think is really unique about this office — we just service anyone who comes in and try to bring people together.”

Case in point: a collaboration with the Georgia Cancer Center that sponsored a workshop by the Alan Alda Center for Communicating Science. The event, the first to be held in the Knox Foundation Community Center at the newly expanded and renovated Georgia Cancer Center, brought researchers together from several disciplines on campus to learn how to better communicate the value of what they do.

“That’s another part of my job — seeing what other people are doing and bringing it to the institution,” he says.

As for the physical space his office occupies, Thorp says it’s symbolic of the university’s dedication to interdisciplinary research and collaboration. Not only does it serve as an office for him and the research manager, but the Center for Undergraduate Research and Scholarship (CURS) office is there as well. It also has a conference room, office space to be staffed on a rotating basis by other research staff and a couple of cubicles that can be used as workspaces — all with an eye toward collaboration.

And its location in Allgood Hall on the Summerville Campus is every bit as intentional as the office’s design.

“What we’re doing up here, practically speaking, is expanding the notion of what research is,” he says. “When you say research, in most people’s minds it means sponsored grants like they excel at on the Health Sciences Campus. What we’re trying to do is make sure everyone understands that research is certainly all of that, but it’s also more. It’s area expertise; it’s publications; it’s networking and promoting the university as an area where intellectual activity takes place. It means excellence in every field, and every field needs some kind of support mechanism to help them do it.”

If the Office of Interdisciplinary Research represents the bridge between disciplines, the $62.5 million expansion of the M. Bert Storey Research Building at the Georgia Cancer Center, particularly the stunning three-story bridge connector spanning Laney Walker Boulevard and connecting the research space to the clinical space, represents the practical and symbolic
bridge uniting the two. The space provides a literal pathway for the free flow of ideas between the researcher’s bench and the patient’s bedside.

The addition of 42 laboratory benches to the 144 that already existed means the lab space can support 10 or 11 new teams of cancer researchers, and the open-lab concept allows for built-in flexibility. Not only can researchers be strategically placed so they can work side by side with those they can benefit the most from, but individual research groups can reconfigure the space to fit their specific needs, including bringing in specialized equipment and instruments. And should a researcher earn an even larger grant and need to hire more lab personnel, the space can be easily expanded.

And while the dramatic connector functions as a bridge between the research building on one side of Laney Walker Boulevard and the clinical site on the other, it’s essentially another building, with three levels spanning the street. It supports 68 offices and seven conference rooms and radiates open collaboration across the entire span.

Benchside and bedside literally transition across the street. And if any of those working in the building need a reminder of why they’re doing what they’re doing, they only have to look out the window, which overlooks all the constituent medical centers and the skyline of the community the cancer center serves.

The Chemical and Biomolecular Analysis Facility is located in two different rooms in Science Hall on the Summerville Campus, but Director Juan Zou is eager for people to know that the facility is open for research across the university.

In the past, the analytical instruments were only used for teaching,* but because the university has so many faculty members engaged in research, the chemistry department decided to put its biophysical and analytic instruments into a Core facility.

“Our mission is to provide good service and good training and good collaboration for our researchers at Augusta University, not only for our department, but also for other researchers at the Health Sciences Campus as well as local companies,” Zou says.

The instruments, including high-field nuclear magnetic resonance (NMR), liquid chromatography-mass spectrometry (LC-MS), circular dichroism spectrometer (CD) and inductively coupled plasma optical emission spectrometry (ICP-OES), are more biophysical and analytical in nature than the instruments at the Core lab on the Health Sciences Campus, which tend to be more biological in nature.

“We have faculty who are synthesizing some drugs here now and they use our instruments to analyze the purity,” Zou says. “We also have faculty analyzing the contamination of water, and a researcher at the Georgia Cancer Center is working on making some anti-cancer drugs, so our instruments try to help them optimize the structure of the drug.”

Right now, Zou is the facility’s director and sole employee, handling everything from software management and equipment maintenance to training and troubleshooting, but she is excited about the increased opportunities for collaboration once the College of Science and Mathematics moves to the Health Sciences Campus.

*Clarification: Prior to the creation of the core facility, faculty members used the chemistry department’s analytical instruments for research. Some of that research resulted in patent applications and publications.

One of the most important strategies used by research universities to enhance their research mission is to provide cores that offer exceptional expertise combined with an investment in equipment that would be too costly for purchase by a single laboratory. The Electron Microscopy and Histology Core is an example of just such a core at Augusta University.

Spread across 3,000 square feet on the first floor of the Carl Sanders Research and Education Building on the Health Sciences Campus, the lab is supported by the university, the Department of Cellular Biology and Anatomy and user fees. It’s open to researchers on both campuses and also non-university users.

“We have many investigators who regularly use this core to address their research questions,” says Penny Roon, the lab’s manager. “Additionally, we perform a good bit of work for investigators off campus.”

Roon says the lab is routinely included during researcher recruitment visits, and there is always enthusiasm on the part of faculty candidates for the core’s facilities and expertise.

“Oftentimes researchers publish outstanding images of research findings, and investigators from other universities contact us to assist with their work,” she says.

It is also utilized by investigators who oversee a program project grant focused on aging, especially studies of bones and muscles. The lab is one of the few facilities in the nation that routinely prepares sections from bone, a very hard tissue, for histologic studies.

And while the work they do is incredibly sophisticated, the team never loses track of its support function and customer service. The lab offers free consultations, and the staff is available to assist researchers who wish to expand their research “toolkit” to include histologic methods.

The Physics Innovation Facility on the Summerville Campus, located next to the Department of Art and Design’s Ceramics Lab, provides faculty members in the College of Science and Mathematics something they didn’t have before — open education research space to give students the kind of hands-on experiences they need.

“You can’t do worthwhile research if you don’t have reasonable facilities,” says Dr. Thomas Crute, chair of the Department of Chemistry and Physics. “This is a flexible space with precision capability.”

The space has already hosted summer camps, and it not only provides space for machines like 3D printers and the large computer numerical control (CNC) router donated by Textron, it allows for space for students to learn larger-scale innovation, such as building and perfecting a remote-control golf car, also donated by Textron.

“Textron had to do a lot of testing of the golf car, and sometimes, depending on what they had to do, that could be dangerous for the operator, so our students were challenged to develop hardware and software to test it without potentially hurting somebody,” Crute says.

The result was an undergraduate-made version of a driverless car.

And while Crute says the space is
primarily for the students’ benefit, the space for such large, precision equipment helps faculty as well.

“Generally, in physics if you’re going to make a discovery, you don’t go to the hardware store to get a tool for the task, and that’s really the vision of this,” he says. “As we continue to grow and get more research-intensive with experiential sorts of projects, then we’ve got the capacity to build the specialized equipment to make the tools and measurements.”

This kind of collaborative research space is certainly not unique across Augusta University. New space at the School of Computer and Cyber Sciences, located in the Georgia Cyber Center, provides a collaborative area along with the technology to advance cybersecurity research, and as the university continues to embrace its commitment to research, these types of spaces will continue to evolve across all Augusta campuses.

The End of the Rainbow